A year after the armies of India and China were locked in a standoff at Doklam, soldiers of the two countries were seen chanting, linking arms and dancing in the backdrop of a joint military drill in a video released by the Indian Army.

In between the obstacle courses and field manoeuvres, there was dancing and music, with fancy footwork extending to the football field where teams from both sides played a friendly match.

The armies of the two sides resumed their annual military drill ‘Hand in Hand’ on December 10 and it will continue until December 23 at Chengdu in China. 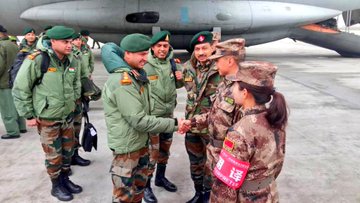 Ex #HandinHand2018, Troops of #IndianArmy landed at #Chengdu, #China for India China Joint Training Excercise. Both countries will jointly carry out practice of various operations in a counter-terrorism environment.#Synergy#Interoperability #UnitedNations