Israel’s future Armoured Fighting Vehicle (AFV) named “Carmel” has been the centre of attention among defence analysts around the world ever since the first prototypes were unveiled in August 2019. 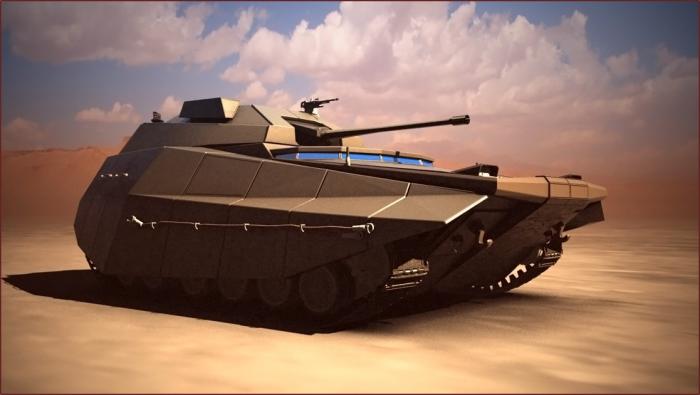 From the super-advanced F-35 style “see-through” cockpit to an Xbox controller, three companies – IAI, Elbit, and Rafael race through to build a state-of-the-art futuristic combat vehicle. The M113 APC is currently being used as a test-bed for the prototypes.

Talking about the Carmel, Noah Smith and Leore Dayan writing for The Washington Post explain how its physical appearance resembles any other modern AFV, including the tracks and the turret. The AFV is made to be operated by an active operational crew of two men, with unique sci-fi apparatus inside.

“However, the Carmel’s most unique innovation can be found upon entry through the back hatch, which brings you into a space filled with equipment often found in the bedroom of an ordinary teenager”, they remark on the control panels, which resemble a gaming setup.

The Carmel does not feature any windows or openings, allowing for sturdier armoured protection. Just like a gaming setup, the outside can be seen via a panoramic screen, while controlling the vehicle and its armament with an Xbox controller.

Being mostly young men and women anywhere in the age group of 18-21, the active-duty element of the IDF would be easier to train due to their familiarity with these systems owing to video games.

The striking resemblance to a video game console is no surprise, for the prototype’s engineers from IAI actually worked with teenage gamers to develop the cabin.

“From teenagers up to pre-military guys, and guys who are after their service, we let each one play with the [Carmel simulation] and define what kind of skills and what kind of accessories we should use, and according to that we developed the whole system”, says Meir Shabtai, the GM of IAI’s robotics systems operations.

The integration of this technology with the soldiers has indeed been fruitful in the trials conducted.  Being familiar with the controls, the troops are far more comfortable with using such gaming-inspired setups. This brings drastic advancement in the training and especially efficient usage of the machine harnessing its capabilities to the fullest, which gives a superior edge in the battlefield.

The integration of video games into operating mechanisms of military technologies has long experimented. For instance, in 2008, a team of private industry engineers tried to use Nintendo Wii controllers for operating bomb-disposal robots.

In 2014, Xbox controllers were also used by Boeing to operate High Energy Laser Mobile Demonstrators for the U.S. military in trials. Even, the submarine USS Colorado also went in service in 2018 with a periscope operated by the same controller.

Speaking to Washington Post, Shabtai explains why such controllers provide better user experience for the troops: “They know exactly the position of those buttons, and they can reach much better performances with that system. The controller is just the interface, the whole idea is to present a sophisticated technology in a way they can deal with”.

However, the integration of video games and virtual reality has been critiqued by many experts and conservationists. The hardened lethality of war does not provide a medic option which regenerates one’s health within seconds of being hit. This potential desensitizing effect can blur the lines of the virtual world and the reality of the conflicts.

Moshe Friedman, an Israeli military vet working on the project counters these apprehensions. Stating that while the systems are indeed inspired from video games, the command, control and operating doctrines of the IDF remains the same; the facility being provided is the ease of operation and effective use of the machine in the battlefield.

He says, “It’s not being at home, eating and drinking and having fun. This is work. There’s also the way [Carmel] moves, the noise it makes, it’s very different from a video game”.

The autonomous capabilities, however, do not make it fully autonomous. The key decisions which the machine cannot make by itself, have to be taken by the soldiers only concurring to the battlefield situations, according to a statement released by the Israeli Ministry of Defense.

However, the artificial intelligence trained onboard the prototype developed by the IAI is indeed inspired from battlefield simulation video games, specifically the “StarCraft 2”, which was integrated to the AFV with the Unity Engine and VBS platform.

The AI systems onboard the Carmel being developed by the IAI perform approximately 20 to 30% better in battlefield navigation, while simultaneously engaging with the enemy. Moshe Beutel, who heads the algorithm development team, also confirmed that the vehicle operates with the Unity software engine.

According to Friedman, the operational knowledge in a battlefield cannot be replaced by AI and cannot be gained by merely playing video games. The machine is made for professional troops, with comfort in operation and giving high-tech features in a combat zone. “But in the end, you’re holding an Xbox controller”, he remarks.

Previous article
No Anti-India Sentiments In China But Why Are Indians Burning With Fury?
Next article
Did India Miss A Trick By Rejecting ‘Stealth Killer’ Saab Gripen For Rafale & Sukhoi Jets?