Mosque on Wheels – Have you ever heard that word before? Japan, knows for its technological prowess and creative mindset have launched ‘Mosque on Wheels’ with Summer Olympics 2020 just around the corner. A  Tokyo sports and cultural events organisation is taking the extra step to build and ensure peace by creating the Mobile Mosque or Mosque on Wheels. 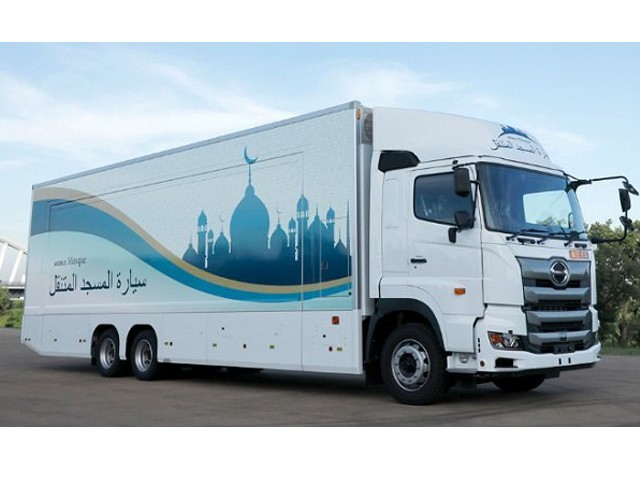 “As an open and hospitable country, we want to share the idea of ‘omotenashi’ [Japanese hospitality] with Muslim people,” said CEO of Yasu Project Yasuharu Inoue.

The first Mobile Mosque was unveiled earlier this week outside Toyota Stadium, a J-League football venue in Toyota city (which is also the headquarters of the car company with the same name). An estimated 100,000 to 200,000 Muslims live in Japan.

This Mosque on Wheels is a white and blue coloured 25-tonne truck that opens from the back and doubles in width from the side, creating enough room for 50 Muslims to pray. It also has a washing section where taps are positioned on the outside for cleansing purposes.

The Mosque on Wheels can stop at various Olympic destinations to ensure that a large number of Muslims are catered during the event.

Inoue further added that the inspiration for the project came to him when he visited Qatar four years ago. He also hopes that the moving mosque will create world peace and initiate respect for other religions.