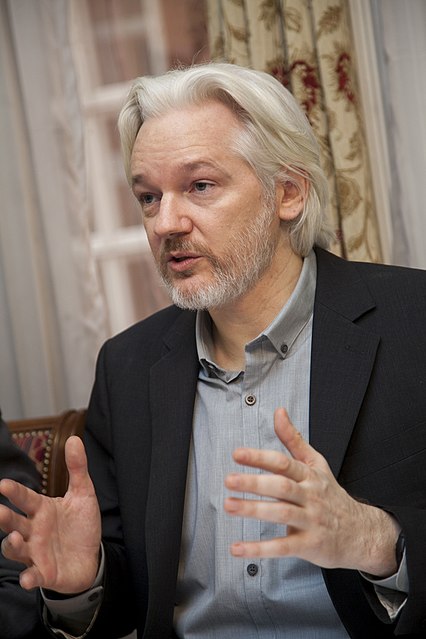 In 2006, Julian Assange, along with his peers, launched the WikiLeaks website. According to Assange and his team, WikiLeaks “specializes in analyzing and publishing large data sets of censored or otherwise limited official materials.” As a result, WikiLeaks has become an information platform for draining relevant materials from third-party informants.

WikiLeaks gained public recognition when it published said secret documents on their website. The files created a wave of unrest and raised uncomfortable questions regarding the legitimacy of US actions on these foreign soils. The documents were submitted by an American soldier Bradley Manning (now Chelsea Manning), who was arrested in May on American soils. This arrest is said to have moved the proceedings for the extradition of Julian Assange.

In August 2010, a Swedish prosecutor issued a European arrest warrant for Assange in connection with allegations of rape and sexual misconduct in Sweden, cases not related to WikiLeaks. Outwardly, it looked as if the case was fabricated by order from the United States. In November of the same year, Interpol announced Assange on the international wanted list on charges of sexual offences.

Assange, who lived in the UK at the time, denied the charges and surrendered himself to the police on December 7, 2010. Seven days later, a British court released him on bail of £ 240,000 at the time of the trial on his extradition to Sweden. After the United Kingdom’s Supreme Court rejected the Assange’s appeal against a court decision on his extradition to Sweden in June 2012, Assange, violating the conditions of the bail, disappeared within the walls of the Ecuadorian Embassy in London, where he remained until his last arrest – 11 April 2019.

At the embassy of Ecuador, Assange sought diplomatic asylum. Ecuador is a state that has signed a convention on the right to asylum in diplomatic missions to “persons sought for political motives or political crimes”. But this right to diplomatic asylum is not universally accepted. It is not recognized by either the United Kingdom or the United States, which are not parties to this treaty regime. But the United Kingdom, like almost all other countries of the world, is a signatory to the 1964 Vienna Convention on diplomatic missions, which are “inviolable”. Under this convention, the British police could not enter the premises of the embassy and arrest Assange.

Certain political events – the electoral change of president and pressure from the United States – forced Ecuador to withdraw its diplomatic defence of Assange and allow the British police to arrest him. The decisive role here was played by the case of alleged “Russian interference” in the US presidential elections in 2016 which was published on WikiLeaks. In 2016, Ecuador temporarily restricted Internet access to Assange, owing to the argument by the American intelligence community that “state-controlled Russian subjects” were conducting information influence activities coordinated with WikiLeaks.

At the end of 2017, Assange signed an agreement with the Ecuadorian embassy, in which he pledged not to interfere in the internal affairs of foreign states. In 2018, Ecuadorian officials again suspended Assange’s Internet access after he began discussing international diplomatic issues on social networks.

According to the statement of the President of Ecuador Lenin Moreno, Ecuador decided to withdraw the defence of Assange in his embassy in April 2019 due to the continuing violation of the agreement of non-interference in the internal affairs of foreign states. WikiLeaks pointed out on his page that the decision of President Moreno was a politically motivated punishment of Assange for the publication of documents related to corruption charges.

On April 11, 2019, the London Metropolitan Police Service arrested Assange based on two warrants. One – for the refusal to appear before a British court during the procedure of extradition to Sweden. And although the Swedish prosecutor’s office in 2017 and stopped the case against Assange, the UK court concluded that the warrant for his extradition remains in force. On May 1, 2019, Julian Assange was sentenced by a British court to 50 weeks in prison for violating bail conditions and is being held in Belmarsh prison.

The second warrant, which became the basis for the arrest, was issued at the request of the United States. This comes along with a preliminary indictment from 2018. On 23 May 2019, the US Justice Department filed 17 new charges for violating the Espionage Act by publishing the military and diplomatic documents. These charges would lead Julian Assange to serve time upwards of 170 years in imprisonment under the Espionage Act. Some of the charges are as follows (under the Computer Fraud and Abuse Act (CFFA, 18 USC)) around the following topics:

Julian Assange Extradition To United States: Will The UK Do It?

The extradition of Julian Assange to the United States is not guaranteed, and many observers predict that this case will require detailed proceedings in the British judicial system. Once the United States has submitted a full request for extradition, the UK court must consider whether there are any statutory prohibitions on its extradition. The British court may take into account such circumstances as the time of the act, the age of Assange, his state of health, the non-observance of the European Convention on Human Rights and potential discrimination based on race, gender or political opinion. The British Home Secretary should separately assess whether there is a threat of capital punishment for Assange.

In the past, restrictions in the UK Extradition Act blocked some US attempts to extradite individuals accused of computer burglary crimes. In 2012, the then Minister of the Interior, Teresa May, refused to extradite the United States to British citizen Gary McKinnon, accused of hacking US government computers because of the risk of suicide for McKinnon, who was diagnosed with Asperger syndrome and depression.

In 2014, the United States asked for a British citizen of Finnish origin Lauri Love to be charged with hacking into the computers of the US government under violation of the Computer Fraud and Abuse Act (CFFA), the same as what Assange is being charged with. A British court then rejected a request from the US because it could cause severe depression and increase the risk of suicide Love.

Many comments have already appeared in the media about the poor state of health of Assange, who looks older than his age. Assange himself, who is not a British citizen, argues that he was denied adequate medical care at the Ecuadorian embassy, and he may bring similar arguments to the court similar to those of Love and McKinnon (related to general and mental health)

The Assange case raises a complex tangle of legal issues of international and domestic law. The most important is the question of the conformity of the actions of Assange with the First Amendment of the US Constitution with prohibitions on encroachment on the freedom of speech and encroachment on press freedom.

Commentators in the US are actively discussing whether the prosecution of Assange will criminalize publishing activities and the difference between leaks on WikiLeaks and traditional journalism. Therefore, in the American indictment, the emphasis was specifically made on the statement that in March 2010 Assange helped Manning to crack the password for accessing classified information on computers of the US Department of Defense. But this fact has yet to be proved.

The American espionage law is formulated in such a way that the United States has the potential to press charges against media that receive and publish leaks of information on national defence. The Obama administration had decided not to press charges of espionage against Assange since it would set a precedent to harass the media and journalists. It had filed seven charges against its employees and contractors for leaking information including Chelsea Manning and Edward Snowden.

The current Trump administration may have a different opinion regarding computer hacking charges. They do not consider WikiLeaks as a journalistic organization with the right to protect the news media. In April 2017, the then CIA Director Mark Pompeo publicly described WikiLeaks as “a non-state hostile intelligence service that often contributes to state actors like Russia.” But so far, the US Attorney General has not commented on the decision to indict Assange in terms of “newsgathering activities” and “the role of the media.”

By the looks of it, the charges suggested by the US Department of Justice seems to be lingering more on the softer side of the espionage conversation. Moreover, Article 7 of the extradition agreement between these states allows the United States to provide guarantees to the British that they will not seek the death penalty usually used in the United States on other serious crimes.

However, this treaty prohibits extradition for “political crimes” or in a situation where the extradition request is “politically motivated”. Therefore, it is to be expected that Assange in a British court in his defence will press against the political motives of the American request.

Besides, under Article 18 of the extradition treaty, Assange will not be convicted for any other crime in the United States, except for the offence for which the British side extradites him. This means that legally, the US will not be able to press more charges on Assange, than those he is already charged with.

In terms of extradition, Assange is looking at a long and tedious trial that would commence in the year 2020. This would decide the question of extradition or not-extradition to the US. However, in the case of Assange, a complication along the Swedish line is a possibility. In 2017, the Swedish prosecutor’s office discontinued the investigation into the “rape” case, but it did not release Assange from this charge at all.

The Swedish prosecutor’s office replied that it was studying the request, but had not yet decided whether to resume the investigation. If Sweden resumes the investigation, then the Swedish request for the extradition of Assange could complicate his case in the UK. The European arrest warrant system involves a simplified issuance system and the UK is still there because of the slippage of Brexit. The system will have to decide how to take revenge on Assange: as a “muscular rapist” or as a “malicious hacker of computers”.