In what appears to be his retaliation against Indian Prime Minister Narendra Modi’s action during his 2018 India visit, Canadian Premier Justin Trudeau has done everything right to ensure the longevity of his minority government.

But in the process, he will be remembered as a head of a foreign government, who, with the solitary exception of his Pakistani counterpart, has interfered in what is strictly India’s domestic politics and that too so brazenly.

Diplomatic observers find it difficult to remember a single instance in the recent past when the Prime Minister of a leading western democracy has commented on a ticklish domestic issue of a fellow democracy. But Trudeau has precisely done that.

Commenting on the ongoing farmers’ agitation in India against the newly legislated agrarian laws, Trudeau said on Monday, on the occasion of Gurupurab (551st birth anniversary of Guru Nanak), that he was very worried about the unfolding incident and that Canada’s concerns have been relayed to the Modi government.

“[About the news coming from India about the protest by farmers] The situation is very concerning. All of us are worried about family and friends, and this is a reality for many. Let me remind you. Canada will always defend the rights of peaceful protesters. We have intimated our concerns to the Indian authorities,” he said. He also tweeted a video of his complete address at the event.

Predictably, India has responded, but the response is much more nuanced and moderate.  The official spokesperson of India’s Ministry of External Affairs Anurag Srivastava has said: “We have seen some ill-informed comments by Canadian leaders relating to farmers in India. Such comments are unwarranted, especially when pertaining to the internal affairs of a democratic country. It is also best that diplomatic conversations are not misrepresented for political purposes.”

We've seen some ill-informed comments by Canadian leaders relating to farmers in India. These are unwarranted especially when pertaining to internal affairs of a democratic country. It's also best that diplomatic conversations aren't misrepresented for political purposes:MEA Spox pic.twitter.com/HXtFTrsxCX

The Canadian Prime Minister seems to have settled a personal score with Modi. During his visit to India in 2018, he was not received by Modi or any of his cabinet colleagues at the airport, something that is taken for granted otherwise during a visit of the important head of the government to India.

Similarly, on his subsequent visit to the Taj Mahal in Agra, he was also not received by a minister of the Uttar Pradesh government in what was an exception to the tradition.

The reports of peaceful protesters being brutalized in India are very troubling. Many of my constituents have family there and are worried about the safety of their loved ones. Healthy democracies allow peaceful protest. I urge those involved to uphold this fundamental right. https://t.co/myWev8t3uW

Treatment to Trudeau during his visit to India had got a bad press in Canada and the US, though it was pointed out by many that the official part of his otherwise long visit was only small and came after the end of his private-visit part. But, it was a fact that miffed at the Canadian PM’s support for ‘Sikh separatists’, Modi had refused to meet Trudeau until he made amends by meeting Punjab Chief Minister Amarinder Singh.

Trudeau also faced criticism for dressing in ‘gimmicky’ ethnic Indian wear throughout his stay in the country and was slammed for his invitation to the attempted murder-accused and suspected Khalistani separatist Jaspal Atwal in official functions.

Despite India-Canada bilateral ties being underpinned by shared values of democracy, pluralism, expanding economic engagement, regular high-level interactions, and long-standing people-to-people ties, and despite annual bilateral trade amounting to nearly 7 billion dollars and more than 1,000 Canadian companies actively pursuing business in the Indian market (400 of them are based in India), the warmth between India and Canada has been lacking ever since Trudeau assumed office in 2015.

Canada PM @JustinTrudeau raises the issue of farmer protests in India. Says, "situation is concerning…. Canada will always be thr to defend the right of peaceful protest". Adds, "we have reached out through multiple means directly to Indian authorities" pic.twitter.com/SKa0GJAMzr

A born “liberal, he has never been comfortable with Modi’s image as a hardliner   “Hindu- nationalist”. But the politician’s blood in him (his late father too was the country’s Prime Minister) also makes it good politics domestically to keep the ruling parties in Delhi and Punjab guessing about the Canadian government.

The issue of the farmer’s agitation may have brought Punjab Chief Minister Amarinder Singh to his side, but it is an open secret that Singh has never liked some of the leading members, including the cabinet ministers of Trudeau’s Liberal Party interfering in Punjab politics, particularly during election time.

On Guru Nanak Dev Ji's Gurpurab, Sikhs across Canada are thinking of and praying for India's farmers who are peacefully protesting new farming legislation.

The right to peaceful protest is fundamental in any democracy.

These farmers deserve to be heard and respected. pic.twitter.com/LdnF2xkiMa

In fact, Punjab has been the largest source of Indian immigrants to Canada. And many Sikhs, who are influential in Canadian politics and public life, have supported the cause of Khalistan.

As many as 18 Sikhs were voted to the Canadian Parliament in the federal elections held last year. 13 of them belong to the ruling Liberal party (defense minister Harjit Singh Sajjan is one of them), four from the Conservative Party, and one Jagmeet Singh is from the New Democratic Party. 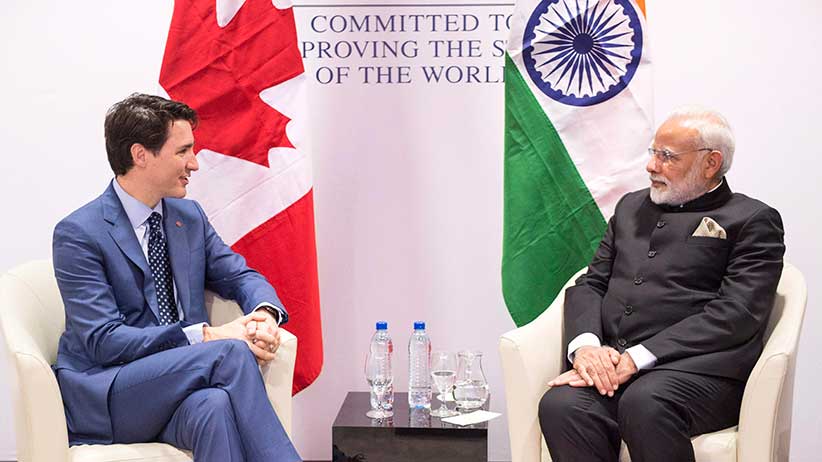 In 2015, Trudeau had won a landslide majority, but in last year’s federal elections, his Liberal Party secured only 157 of 338 seat-House, thus 13 short of the majority mark of 170. He has been running a minority government in his second term since then and is critically dependent on the outside support of Singh’s New Democratic Party that has won 24 seats.

Critical dependence on Singh explains Trudeau’s sharing of the Sikh sensitivities. And many of these Sikhs are upper caste-Jats, maintaining strong family connections in India. And it so happens that the ongoing farmers’ agitation in India is dominated by rich farmers from Punjab, most of them being Jats and supported by Hindu Jat farmers in the neighboring states of Haryana and Uttar Pradesh.

Trudeau’s dependence on Sikh votes and support also explains why last year he had removed a reference to Sikh extremism from a federal report that had earlier termed Sikh terrorism as one of the five threats facing Canada, alongside radical Islam and right-wing extremism.

It said that “two key Sikh organizations, Babbar Khalsa International and the International Sikh Youth Federation, have been identified as being associated with terrorism and remain listed terrorist entities under the Criminal Code.” The report cited the 1985 bombing of Air India Flight 182 by British Columbia-based Sikh extremists.

Thus, the farmer’s agitation in India has provided Trudeau a good pretext to retain the Sikh support. The survival of his government is more important than diplomatic niceties with India.