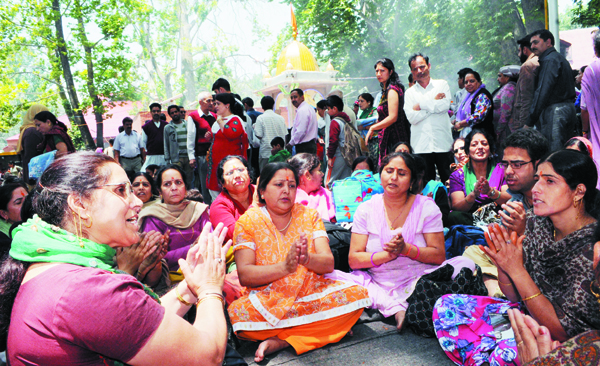 Housing the shrine of Ragnya Devi, a revered goddess of Kashmiri Pandits, the Mata Kheer Bhawani temple in Tulmulla village is considered the holiest religious destination for the KPs.

Walking barefoot, the devotees carried rose petals and offered tribute to the goddess as men took a dip in the stream close to the shrine. Over 60,000 to 70,000 displaced pandits from various parts of India and abroad are expected to visit five famous temples in the Kashmir valley during Kheer Bhawani fair starting on Zeasht Ashtami, which falls on June 10 this year.

“We have flagged off the buses carrying Kashmir migrant devotees to Mata Kheer Bhawani temple in Kashmir. Apart other vehicles have been sent to other four shrines in North, Central and South Kashmir for paying obeisance at the shrines tomorrow”, Relief Commissioner Bhat told reporters here.

Bhat, who personally visited all the five shrines, said there will be a huge increase in the KP pilgrims visiting these shrines as compared to past few years. “We have finalised all arrangements in connections with the yatra. I along with the respective heads of various districts and officers visited all the five temples and put in place all the required arrangements,” he said.

Bhat visited five temples of goddess Ragniya and Mata Tripursundri in Kashmir valley to finalise the security, boarding and lodging, and transportation facilities enroute and at the shrines.

All Party Migrant Coordination committee (APMCC) chairman Vinod Pandita said that this year best ever arrangements have been made at temples of Tulmulla in Ganderbal district, Tikker in Kupwara, Laktipora Aishmuqam in Anantnag and Mata Tripursundri Devsar and Mata Kheer Bhawani Manzgam in Kulgam district for the devotees.

Zeasht Ashtami is celebrated by Kashmiri Pandits across the country and outside and they try to visit Mela Kheer Bhawani in the Valley on the occasion. This year the mela is expected to attract huge participation by over 60 to 70,000 displaced Kashmiri Pandits, said Pandita.

He said owing to militancy, the participation by Kashmiri Pandits has been low, but this year there are indications of a surge in the participation. Most of the community members are likely to undertake their journey with their families in their own vehicles, but the state administration too has made transportation arrangements for those, who cannot afford it, he said, adding the registration is still on for facilitating the pilgrims.

Apart from the security, other arrangements made by the administration include the availability of portable water, sanitation, fire and emergency services, sleeping bags, blankets, LPG cylinders, kerosene oil, rice and wheat flour.