New York Times Report, Srinagar, Jammu and Kashmir: Mohammad Ishaq Lone got a call from the Indian Army one February night, ordering him to meet soldiers at an outpost near his house in Kashmir. It was only after he was hauled off to a brightly lit room, bound and beaten that he discovered why.

A soldier began by punching him in the face, drawing blood, Mr. Lone said. Another smacked him with a metal rod and began demanding that he disclose the whereabouts of his brother, who had left home months earlier to join militants waging a campaign to separate Kashmir from Indian rule.

Mr. Lone, a pharmacist with two young children, begged them to stop, saying he did not know where his brother had gone. He recalled screaming for help before losing consciousness.

“The world around me was collapsing,” he said.

As tensions with the Indian authorities in Kashmir have sharply increased, Kashmiris are calling for an international investigation into accounts of abuse and torture by the security forces.

According to a lengthy new report from Kashmiri activists, thousands of civilians have been summarily arrested and then abused in Kashmir, the center of a long and bitter territorial dispute between India and Pakistan.

Released in May by rights groups in Srinagar, the capital of the Indian-administered part of Kashmir, the report profiles 432 victims of torture in detention since 1990.

It includes accounts alleging that Indian security forces had hung Kashmiris by their wrists, shocked them, forced them to stare at high-voltage lamps and dunked them in water mixed with chili powder. Most were civilians accused of having information about militants, the report said, and 49 of them died during or after being tortured.

In interviews with The New York Times, more than two dozen Kashmiris, including 15 whose cases are included in the report, shared similar accounts. The Times reviewed hospital documents and spoke with victims’ relatives to help verify their stories.

Though some forms of torture are explicitly illegal in India, the report found that security personnel got away with their actions in every case because of laws that give them broad impunity.

India has emphatically denied accusations of abuses in Kashmir. In an interview, Dilbag Singh, the director general of the police in the region, said the report was “generalizing things based on data that is fake or fuzzed.”

In a written response, Lt. Col. Mohit Vaishnava, a spokesman for the Indian Army, said last month that allegations of abuse were “false and fabricated propaganda.”

According to data he sent, the Indian Army was aware of 1,052 alleged human rights abuses between 1994 and May 31, 2019, in Jammu and Kashmir. Every case was investigated, the data showed, with 997 of them found by the army to be “false” or “baseless,” and punishment meted out to 70 personnel in other cases.

Last year, the United Nations also raised grave human rights concerns in Kashmir, logging cases of torture, among other issues, while detainees were in the custody of Indian security forces from June 2016 to April 2018.

India’s Ministry of External Affairs wrote in a statement that the United Nations’ findings played down wrongdoing by Pakistan in spreading terror and were “fallacious, tendentious and motivated.”

Accusations of abuses have intensified as the Indian government has hardened its crackdown against militants and protesters in recent years.

To disperse crowds of protesters, security forces have injured thousands of people with pellet-firing shotguns. Civilian deaths rose over 200 percent from 2013 through 2018, when at least 160 people were killed, including from interrogations, activists say. And this year is on track to become one of the deadliest, overall, in the last decade. 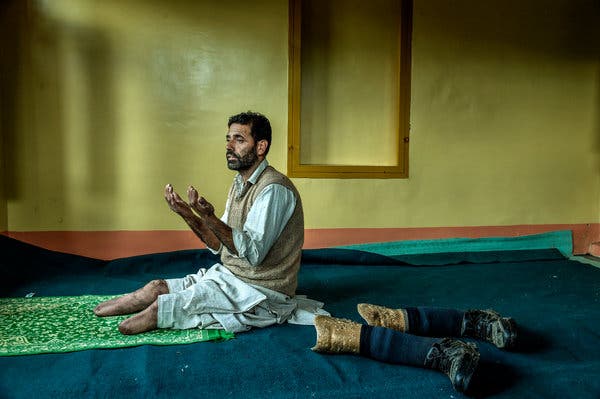 Nazir Ahmad Sheikh, 61, a farmer who was featured in the report on torture, said soldiers accused him of being a militant and detained him in 1994. He said they crushed his legs with a heavy roller and then poured scalding hot water on them.CreditAtul Loke for The New York Times

Parvez Imroz, the president of the Jammu and Kashmir Coalition of Civil Society, a group that co-authored the 550-page report on torture, said the scope of abuse was even larger than the United Nations had reported.

The accusations have come amid a wave of detentions in Kashmir. A briefing released on June 12 from Amnesty International found that in the last few years, Indian armed forces had detained many hundreds of civilians — including journalists, activists and children — without charge or trial. The arrests were made under the Jammu and Kashmir Public Safety Act, which activists say violates international human rights law.

In an interview with The Times, Nazir Ahmad Sheikh, 61, a farmer who was featured in the report on torture, said soldiers accused him of being a militant and detained him in 1994. He said they crushed his legs with a heavy roller and then poured scalding hot water on them. The men then forced him to open the lid of a coal heater with his bare hands at an army camp in northern Kashmir, he said.

“The moment I touched it, some of my tortured and numb fingers fell to the ground,” said Mr. Sheikh, who also lost both legs below the kneecap and was forced to beg for money to survive after the ordeal. “A torture chamber is like a dark well where you cry out loud and no one hears your voice.”

Hundreds of Kashmiris have joined homegrown insurgency groups since 2016. And tensions reached a breaking point in February, when a suicide vehicle bombing struck a convoy of Indian paramilitary forces, killing at least 40 of them. It set off a tense military standoff between India and Pakistan, where a banned terrorist group, Jaish-e-Muhammad, claimed responsibility.

Over the last year, activists say, the hunt for separatists has intensified, pulling ordinary Kashmiris into the fold.

Feroz Ahmad Hajam said he was on the way to meet a friend in September when the police abducted him, locked him in an interrogation cell in southern Kashmir and burned his feet and shoulders with cigarettes.

When Mr. Hajam, 25, a laborer, said he had no affiliation with militants, an officer walked up behind him and cut his throat.

The police have denied his claim and accused him of attempting to kill himself.

“I feel the knife in my dreams, slitting my throat again and again,” he said in an interview, writing his answers on a piece of paper because his vocal cords were so damaged that he can no longer speak.

Why Are Locals Dreading The 2019 Amarnath Yatra Which Is Boosting The Economy & Tourism?

“I want to talk just once,” he wrote, tears rolling down his cheeks.

Prime Minister Narendra Modi of India, whose Bharatiya Janata Party won a resounding victory during national elections in May, has vowed to ease tensions in Kashmir.

But many worry that the government will further alienate locals by removing special protections that grant the population, which is majority Muslim, a certain degree of autonomy. Hostility toward the Indian security forces has only increased. Almost every day, life is disrupted by gun battles, bombings or street protests.

Mr. Lone, 39, who said he was tortured for more than two hours while being questioned by Indian soldiers in February, said peace was unlikely.

When Mr. Lone regained consciousness at the army camp in the village of Rawalpora, he said three soldiers standing on him stomped on his thighs, struck him with bamboo sticks and screamed at him to get up and walk. He could not manage even one step.

“It was as if someone was taking me to a butcher’s shop to have me chopped into small pieces,” he said.

Bloodied and exhausted, Mr. Lone passed out again. He woke up in a hospital bed surrounded by relatives, who had dragged him from the camp when the soldiers finished with him.

Several months later, Mr. Lone can barely stand for five minutes. He has trouble kneeling to pray. His brother, the militant, is still missing. He worries about his children, ages 8 and 12.

He said the cycle of violence showed no signs of letting up. “Every morning is filled with fear,” he said. “How do you expect justice from one wing of the state when the other is inflicting pain on you? It is hell.”