UK Joins The ‘Hypersonic Race’ – Will Develop A New Weapons Demonstrator Under $2.5B Research Funding

While the CEO of Lockheed Martin, James Taiclet, had already disclosed the involvement of its legendary Skunk Works division in a LinkedIn post following the world premiere of the film, the company has now created a webpage dedicated to Top Gun and the mysterious Darkstar.

“When the Top Gun: Maverick team was looking to push the envelope and stand true to Maverick’s Need for Speed, Skunk Works was their first call. With Skunk Works’ expertise in developing the fastest known aircraft combined with a passion and energy for defining the future of aerospace, Darkstar’s capabilities could be more than mere fiction. They could be reality…”

That closing sentence is quite intriguing, as it suggests that the design might not be completely fictional.

Could Darkstar Be Real?

Hypersonic planes have been on the priority list of the US military for quite a while now. Lockheed Martin’s SR-71 Blackbird was the fastest fighter aircraft ever built, and ever since its retirement in 1998, the US military has longed for its worthy successor.

‘Tail Up & Nose Down’ – Why World’s Best Selling Fighter Jets Are Crashing In A Very Peculiar Manner?

Meanwhile, there is indeed a Blackbird’s successor, the SR-72, also known as the ‘Son of the Blackbird,’ which is being developed in Lockheed’s Skunk Works facility.

It will reportedly make its first flight in 2025 and its top speed is expected to be Mach 6, enough to blow off rooftops, just like how Darkstar does in Top Gun: Maverick.

In fact, as EurAsian Times had reported earlier, the Darkstar mock-up plane shares a massive resemblance with the concept images of the SR-72 released by Lockheed Martin in 2013.

Apparently, the Darkstar looks so real that even China felt the need to turn one of its satellites to photograph the fictional model, according to legendary filmmaker and Top Gun producer Jerry Bruckheimer, who claimed to have been informed of this by the US Navy.

Furthermore, Lockheed Martin’s Director of Communications for Europe, the Middle East, and Africa, John Neilson Tweeted in April that stated that Darkstar could offer a “sneaky peek at what might be the Lockheed Martin SR-72.”

Rumours that ‘Top Gun: Maverick’, in cinemas May 27, features a sneaky peek at what might be the @LockheedMartin SR-72, successor to super-impressive SR-71 Blackbird. This still photo from promotional materials seems to support that thinking. I can’t wait

Rumours that ‘Top Gun: Maverick’, in cinemas May 27, features a sneaky peek at what might be the @LockheedMartin SR-72, successor to super-impressive SR-71 Blackbird. This still photo from promotional materials seems to support that thinking. I can’t wait #avgeek #wingfriday pic.twitter.com/PyAak69qOj

The SR-72 will reportedly be powered by a propulsion system centered on a turbine-based combined cycle (TBCC), which merges a modified production fighter turbine engine with a dual-mode ramjet – also called a scramjet.

This is supposed to enable the aircraft to accelerate from a standing start to Mach 6, meaning it will be able to reach any destination in an incredibly short amount of time.

Furthermore, the platform will be capable of firing hypersonic missiles. The aircraft can be used for high-speed intelligence, surveillance and reconnaissance (ISR), and strike operations. 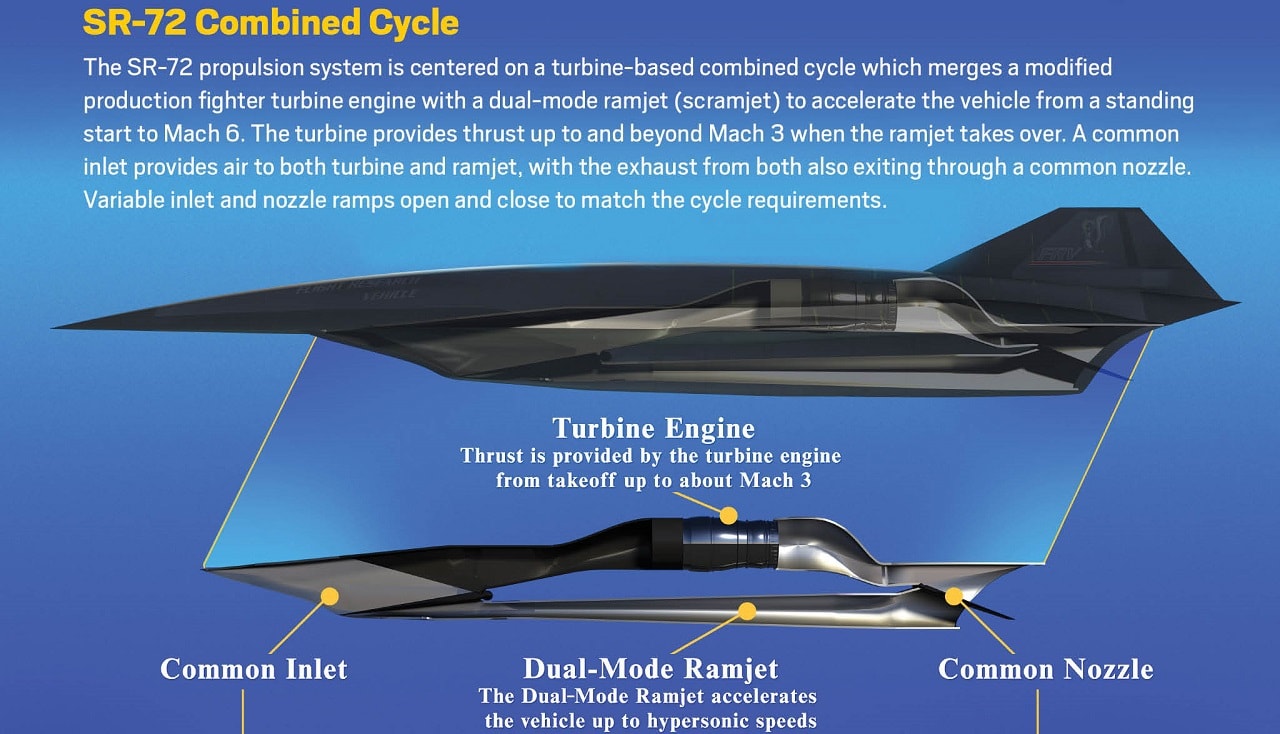 Its high speed combined with hypersonic missiles means no enemy missile defense systems will be able to stop the SR-72 in combat. The reconnaissance fighter is being developed to make it so fast that an adversary will have no time to react or hide from it.

Lockheed believes the SR-72 will change the “definition of air power by giving the US significant tactical and strategic advantages” and forever change the ability of the US to deter and respond to conflicts.

While coming to the Darkstar design, it is also reportedly built around a TBCC propulsion system, with two turbojet/low-bypass turbofan afterburning engines and two scramjets.

Another interesting feature of the Darkstar that also comes from a real aircraft is its cockpit layout with zero forward visibility, found on the X-59 Quiet Supersonic Technology aircraft (QueSST), currently under development also by the Skunk Works.

In the movie, Maverick relies on a synthetic vision system to see what is in front of the aircraft.

Moreover, the art on the Lockheed Martin’s website depicts Darkstar as having a port on the top of the fuselage, which is usually associated with a celestial navigation system (CNS) also found on the SR-71 Blackbird, dubbed as ‘R2D2’ after the famous droid from the Star Wars universe.

A cutting-edge system at the time of its conception, it was capable of automatically cross-checking the position of a moving object as defined by its inertial navigation systems (INS).

While modern combat aircraft and warships largely navigate using inertial navigation systems (INS) with embedded GPS, they are known to have similar Cold War-era systems, which, reports suggest, could be instrumental in providing future navigation capabilities that are immune to jamming and spoofing.

That said, there are some differences between the SR-72 and the fictitious Darkstar, one being the movie model was depicted as having a top speed of Mach 10, while the real jet being developed, as stated before, is engineered to max out at Mach 6.

Also, Skunk Work’s actual SR-72 would be configured as an unpiloted aircraft, as opposed to Darkstar in the movie, which was basically there to satisfy Top Gun’s ‘Need for Speed’.

While Lockheed’s Skunk Works division did help “Top Gun: Maverick” bring the Mach 10 Darkstar plane to life in the film, a company spokesman told Space.com that it is only a movie.

“It is important to note that Darkstar is a hyper-realistic aircraft concept designed specifically for the movie and is otherwise fictitious,” Lockheed’s Ananda Costa said.

Previous articleMere 400 Km Apart, Indian & Chinese Navy Could Be Deployed ‘Next To Each Other’ As Both Look To Expand Power
Next articleUK Joins The ‘Hypersonic Race’ – Will Develop A New Weapons Demonstrator Under $2.5B Research Funding