The United States Army is planning to upgrade its existing gunnery arsenal, for which it has awarded a contract to its biggest defense manufacturer, Lockheed Martin, worth more than $339 million on Friday.

According to the press release, the contract is to be completed in roughly three years, by 31st December 2023.

“Lockheed Martin Corp., Baltimore, Maryland, was awarded an Other Transaction Authority agreement with a ceiling of $339,318,582 for the Mid-Range Capability. Work will be performed in Baltimore, Maryland; Akron, Ohio; Clearwater, Florida; Moorestown, New Jersey; Owego, New York; Syracuse, New York; and Orlando, Florida, with an estimated completion date of Dec. 31, 2023,” the release said.

Interestingly, instead of choosing a dedicated long-range surface-to-surface missile, it decided to amalgamate two of the most reliable weapon systems together in one unit. The Mid-Range Capability, abbreviated as MRC, is the Army’s requirement for tactical strike roles.

In the service’s words – “The Mid-Range Capability (MRC), part of the Army’s number one modernization priority of Long -RangePrecision Fires, will be designed to hit targets in the range between the Precision Strike Missile and the long Range Hypersonic Weapon. The MRC prototype, consisting of launchers, missiles, and a battery operations center (BOC), will be fielded to an operational battery in Fiscal Year 2023.”

The MRC addresses a need identified in the Army’s Fiscal Year 2020 Strategic Fires Study in coordination with Combatant Commanders in key theaters. The Army Rapid Capabilities and Critical Technologies Office(RCCTO) will develop and deliver the prototype MRC. 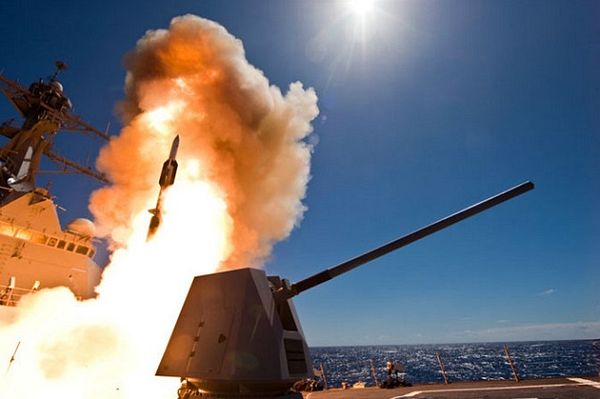 The US Successfully Tests SM-6 Missile Interceptor in Pacific

“Adapting existing systems as much as possible will allow us to move faster than traditional acquisition methods to get this capability into the hands of Soldiers in support of the National Defense Strategy,” said LTG L. Neil Thurgood, Director of Hypersonics, Directed Energy, Space and Rapid Acquisition, who leads the RCCTO. “ Soldier feedback and touchpoints will be embedded throughout the prototyping effort in order to make this system operationally effective the day it is delivered.”

The SM-6 missile is the Navy’s new air defense missile, which is also capable of hitting surface targets. While the Army’s requirement exceeds the range by more than four times, it is being said that it could be similar to a new variant being developed by the Navy enabling the missile to carry the SM-3 missile booster. What’s more, is that the projected speed of the missile would bar Mach 5.

While the SM-6 was mainly set up as an anti-air missile, on the other hand, the Army is planning to field the omnipotent Tomahawk cruise missiles. Even the land-based Tomahawks had been scrapped from service, and are only in service with the Navy.

For the land versions, it would obviously be launched from mobile TELs (transporter erector launchers), and as for Lockheed Martin, it already manufactures the M142 High Mobility Artillery Systems for the service. However, it is still unclear if the same systems would be modified to carry the Tomahawks and SM-6.