Licypriya Kangujam, a child environmental activist rejected an offer to join Indian PM Narendra Modi’s #SheInspiresUs campaign on International Women’s Day. Kangujam said that she doesn’t want to be “celebrated” as the PM doesn’t “listen” to the young activist’s voice.

“Dear Narendra Modi Ji, If you do not listen to my voice, please do not celebrate me. Thank you for including me among your many inspiring women under your initiative #SheInspiresUs. After thinking many times I have decided to reject this honour. Jai Hind!”

The government had chosen the eight-year-old environmental activist as one of the women to run Modi’s social media accounts as part of his #SheInspiresUs campaign — dedicated to women “whose life and work will help ignite motivation in millions” on Sunday. 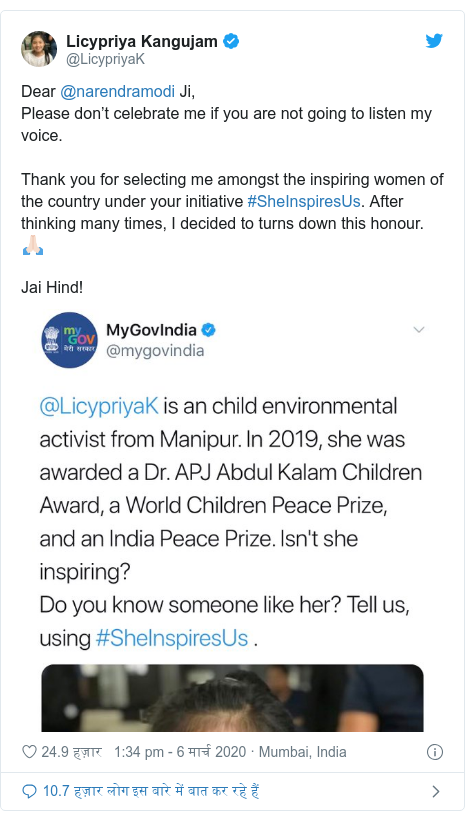 In the same sequence, @mygovindia tweeted, “Licypriya Kangujam, is an environmental activist. In the year 2019, she was awarded the Doctor APJ Abdul Kalam Children Award, World Child Peace Prize and India Peace Prize. Do you know anyone like her? ?

In response to this tweet from the Government of India, Licypriya Kangujam said thank you but refused to accept this honour. She did not stop here and further went on tweeting.

Licypriya Kangujam wrote, “Dear leaders and political parties, I do not want praise for this. Instead, ask your MPs to raise my voice in the current Parliament session. Never use me for my political goals and propagandas. I am not in your favour” 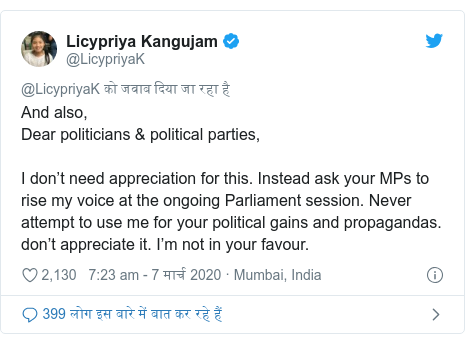 Licypriya wrote in another tweet with the #ClimateCrisis hashtag, “Your MPs are not only dumb but also deaf and blind. It’s a complete failure. Act now.” 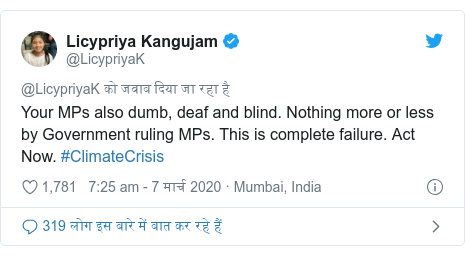 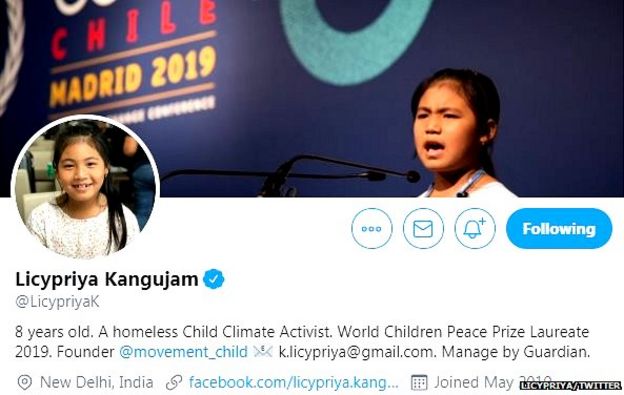 Amid the ongoing uproar on social media, Lysipria posted another tweet a few hours ago:

Licypriya wrote, “Dear Brothers / Sisters, Sir / Madam. Stop all propaganda to bully me. I am not against anyone. I just want system change, not climate change. I don’t expect anything from anyone. I just want our leaders to hear my voice. I believe my rejection will help to listen my voice.

Stop all propaganda to bully me. I’m not against anyone. I just wants system change, not climate change.

I don’t expect anything from anyone except I want our leaders to listen my voice.

I believe my rejection will helps to listen my voice.

Licypriya Kangujam is often compared to Swedish environmental activist Greta Thunberg. However, Licypriya does not like this comparison. She insists that she has her own identity.

Dear Media,
Stop calling me “Greta of India”. I am not doing my activism to looks like Greta Thunberg. Yes, she is one of our Inspiration & great influencer. We have common goal but I have my own identity, story. I began my movement since July 2018 even before Greta was started. pic.twitter.com/3UEqCVWYM8

Licypriya has been advocating for a law to regulate carbon emissions and other greenhouse gases. She has also sought the inclusion of climate change as a compulsory subject in the school curriculum. In the past, the child activist has been often referred to as the ‘Greta of India’ which spurred a lot of discontentment in her.