The investigation is still underway over the collision between US Marine Corps (USMC) Lockheed Martin F-35B stealth fighter and KC-130J tanker during a refuelling exercise in Southern California on 29 September.

A month on since the accident, the images have emerged of Hercules tanker-transport, which belongs to VMGR-352 Raiders, being disassembled.

The KC-130J and F-35B were taking part in Weapons and Tactics Instructor (WTI) course, a seven-week training event hosted by Marine Aviation Weapons and Tactics Squadron One on operational integration of Marine Corps aviation in support of a Marine Air-Ground Task Force.

The KC-130J that survived the mid-air collision with no casualties has been left dented, battered and gashed with plane’s nose, wings, propellers and empennage been removed.

The aircraft now moved to Jacqueline Cochran Airport in Thermal is just a fuselage with all other parts now removed. The severe damage can be seen around its landing gear sponsons and the way its skin has buckled near the side crew door.

The lateral tear ahead of the wing root in the fuselage seems to have been caused by one of the aircraft propellers ripping off its hub and impacting the aircraft.

It is very near the propeller-line warning markings on the aircraft. Another notable damage, a long dent, is likely due to the stress of landing on the plane’s starboard side just behind the cockpit, where the airframe began to buckle. 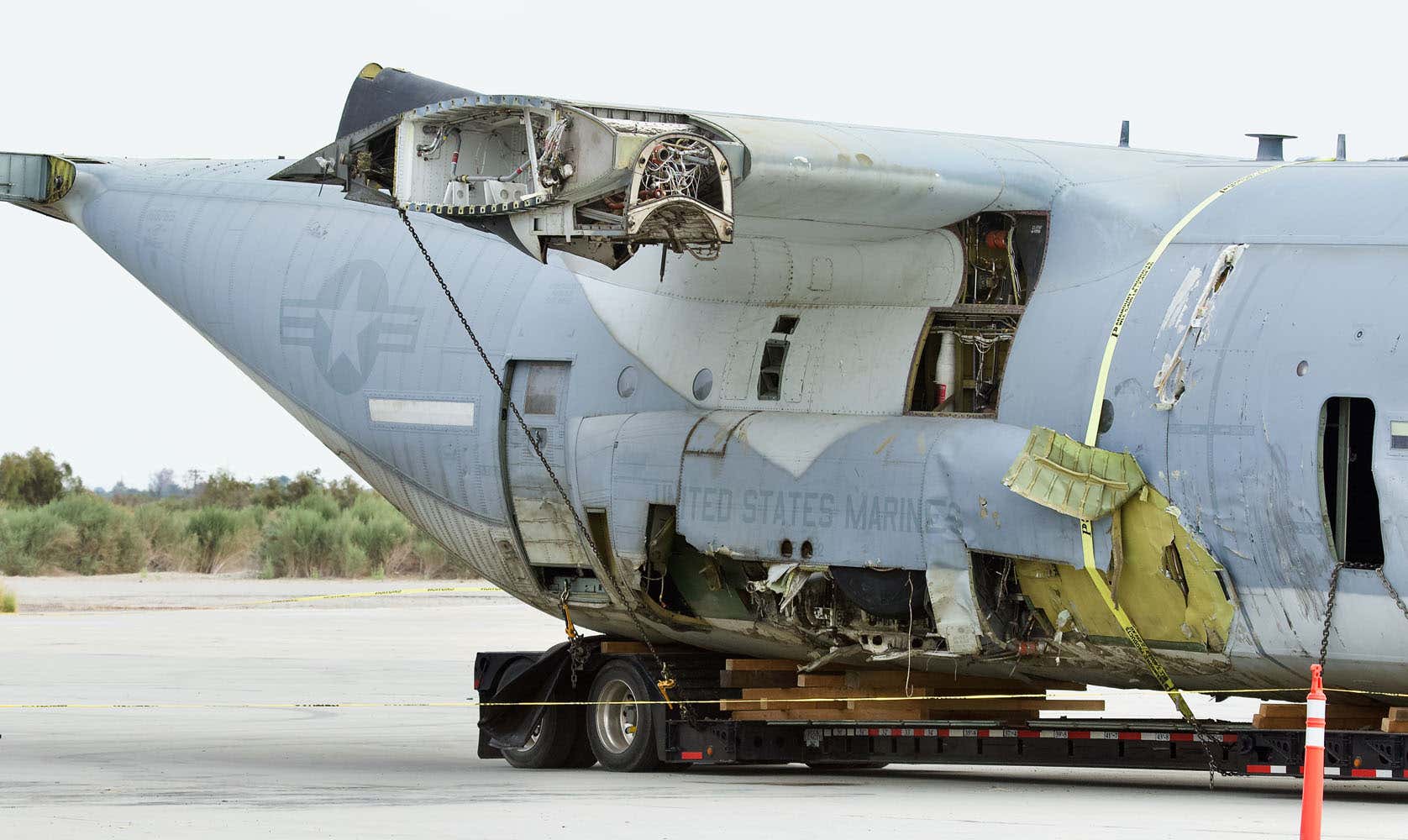 Right after the collision, Hercules belly-landed in a carrot field south of town, with three missing propellers, a refuelling pod, and an aileron.

By my count this thing should have about 3 more propellers, 1 more refueling pod, and 1 more aileron. pic.twitter.com/oK5t8mzAy3

The pilot received the well-deserved accolades for safely landing a plane carrying 60,000 pounds of jet fuel. Lt. Brett Vannier, a spokesman at Marine Corps Air Station Yuma, told the Associated Press on September 30: “It was an impressive manoeuvre bringing it down safely by force. His skills kind of speak to itself just in the fact that everyone survived.”

The pilot of F-35 also survived as he managed to successfully eject before the aircraft plummeted to the ground and exploded into a huge fireball.

During the air-to-air refueling, the KC-130J uses a hose and drogue and the recipient aircraft, in this case an F-35B, uses a pop-up probe to connect to the drogue and draw fuel.

The system is essentially a long tube trailed from the wing of the aircraft with a shuttlecock-like basket at the end which contains a fuel valve, as per the Flightglobal.

The KC-130J pilot says in the recording: “LA Center, LA Center — Raider 50 — declare an emergency. Mid-air collision with VOLT-93. We have two engines out. We’re leaking fuel and might be on fire and an emergency descent at this time. Raider 50.”

The Code One Magazine describes it as a Big Stick for Afghan operations due to its long loiter time, multiple radios, sensor to find and track insurgents or vehicles, and, most importantly to the Marines on the ground, its ability to launch a laser-guided Hellfire or Griffin missile and have those weapons hit exactly where and when needed.