With nearly 60,000 spectators in the Wuhan Sports Center, the opening ceremony of the 2019 Military World Game started with the parade of 109 delegations amid huge cheers. The biggest roar from the crowd was reserved for the 553-strong Chinese team, led out by flag bearer and retired professional basketball player Wang Zhizhi. 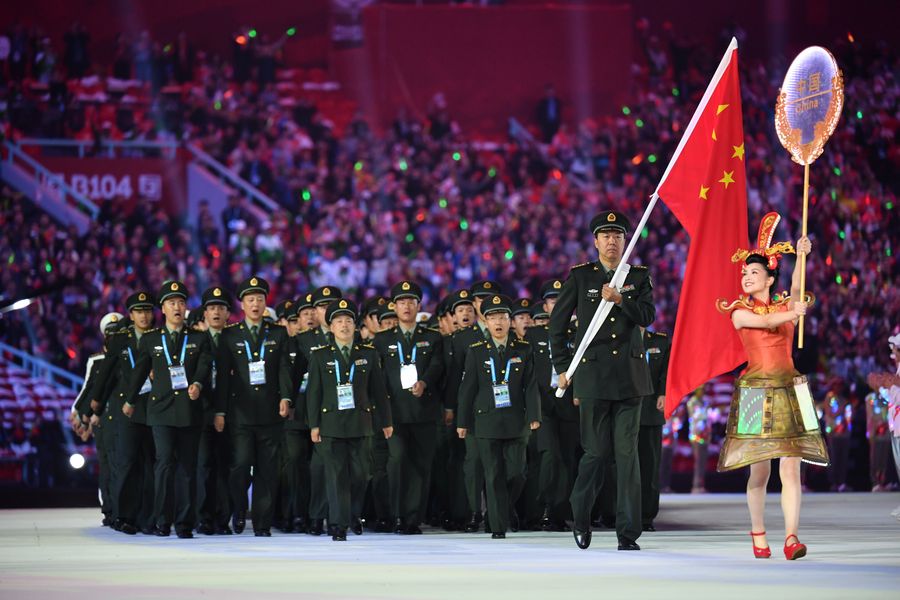 Over the next nine days, a record 9,308 soldiers, including 67 world and Olympic champions, will compete in 27 sports for 329 gold medals, under the motto of this year’s Games “Share friendship, build up peace.”

The 2019 Military World Games feature competitions such as parachuting, aeronautical and military pentathlon, besides regular sporting activities like football etc.

Xu Qiliang, chairman of the 2019 Military World Games organizing committee and vice chairman of the Central Military Commission of the Communist Party of China, extended a warm welcome to athletes, coaches and guests from all nations.

Herve Piccirillo, president of CISM, said in French in his speech that he was filled with joy, pride and hope seeing delegations rally in Wuhan under the banner of CISM.

He said he was happy for athletes’ representation of CISM values, including resilience, courage, team spirit, military brotherhood, commitment and the service for their nations.

He said in a world of uncertainties, he felt hopeful as people united here sending a message of fraternity, solidarity, tolerance and friendship to the whole world.

“By having the best athletes from armed forces of over 100 countries come together in friendship and respect, you are setting a great example of the power of sport to bring all people in peaceful competition,” said President of International Olympic Committee Thomas Bach in a recorded video.

Bach also said that the event came at a very special moment for China since it is the 70th anniversary of the People’s Republic of China and added that “I would like to congratulate President Xi and all Chinese people.”

“Sport always builds bridges, the sport never erects walls. In this spirit, I wish all the athletes all the very best for this Military World Summer Games,” he added. 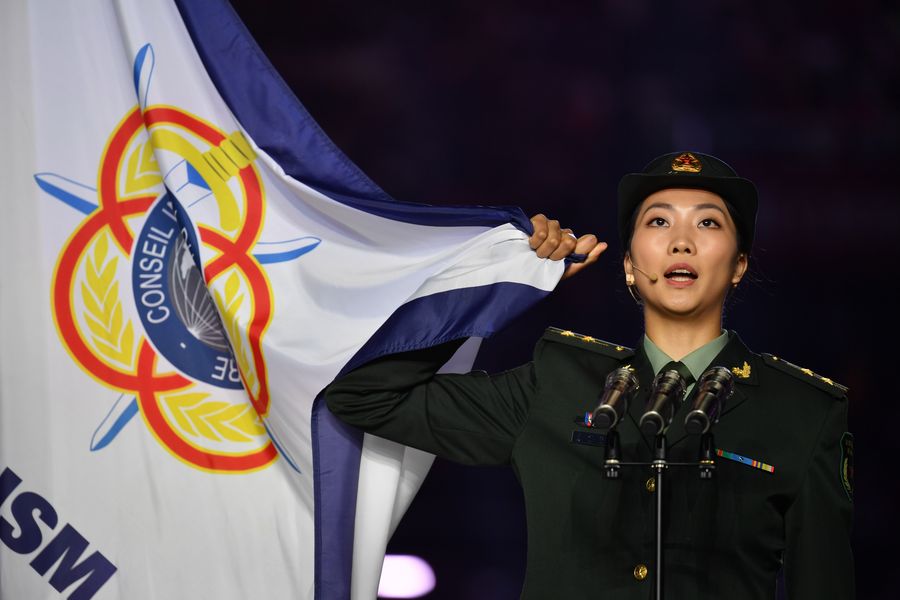 Yuan Xinyue, who is a member of the World Cup-winning Chinese women’s volleyball team and has played for PLA team Bayi since 2014, took the athletes’ oath on behalf of all competitors at the Military World Games.

Afterwards, those inside the stadium were treated to a 50-minute extravaganza titled the “Torch of Peace,” which involved thousands of performers, large-scale projection and LED technologies, and a football pitch-turned three-dimensional stage.

The show celebrated some of China’s greatest ancient military theories – Sun Tzu’s the Art of War, the philosophy of harmony and unity and the Thirty-Six Stratagems – as well as its ancient art, the Great Wall and the Silk Road.

It continued with a focus on unity in the modern world, displaying achievements of China’s armed forces in military reforms as well as the Belt and Road Initiative that links the world. It also championed the vision of building a community with a shared future for mankind.

At the end of the opening ceremony that lasted for about two and a half hours, six bearers relayed the torch before retired basketball player Liu Yudong, China’s flag bearer at the 1996 and 2000 Summer Olympics, lit the cauldron. 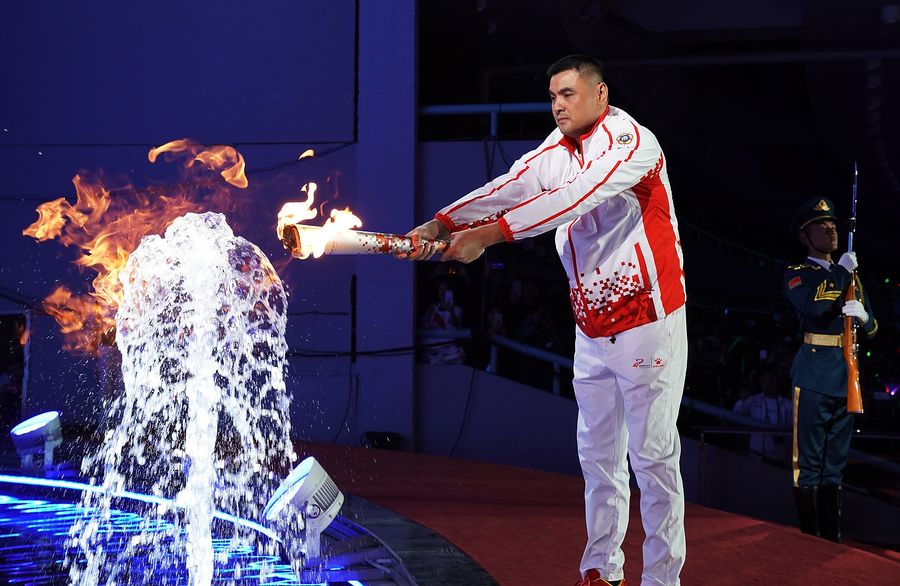 The flame was first lit in east China’s Nanchang, the birthplace of China’s armed forces (known as the the PLA), in August this year.

Defense department and military leaders from 42 nations were invited to attend the opening ceremony.

The Military World Games, also known as the “Olympics for the military,” is the top multi-sports event for soldiers from across the globe.

Founded in 1948, three years after the end of World War II, the CISM has hosted the Military World Games every four years since 1995. In May 2015, China, a member state of CISM, won the bid to host the 2019 Games with Wuhan appointed host city.

The Games have been previously held in countries including Italy, Croatia, India, Brazil and South Korea.

There are many firsts for this year’s Games. The Games have the largest number of sports, with badminton, table tennis, tennis and men’s gymnastics and women’s boxing events being held for the first time. 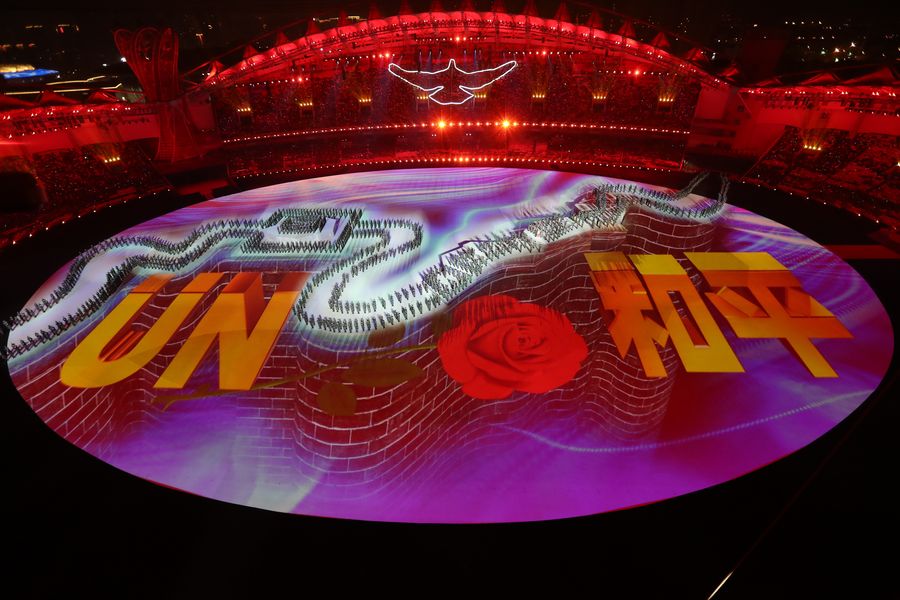 For the first time in the CISM World Games history, the Games are open to the public, instead of being confined to the military bases. More than 200,000 tickets had been sold before the Games opened, according to the organizing committee.

Also, it’s the first time that all competitions have been held within one city, where 35 sports venues were built or renovated to meet international standards. After the Games, most facilities will allow public access and the rest can be dismantled and reassembled elsewhere.

Mark Juliano, a U.S. archery and taekwondo player, said that before arriving he had read news reports about the preparatory work of the Military World Games here in Wuhan and watched videos about the athletes’ village and the venues.

“You developed world-class venues and I can’t wait to experience the Games,” he told Xinhua reporters in the airport. 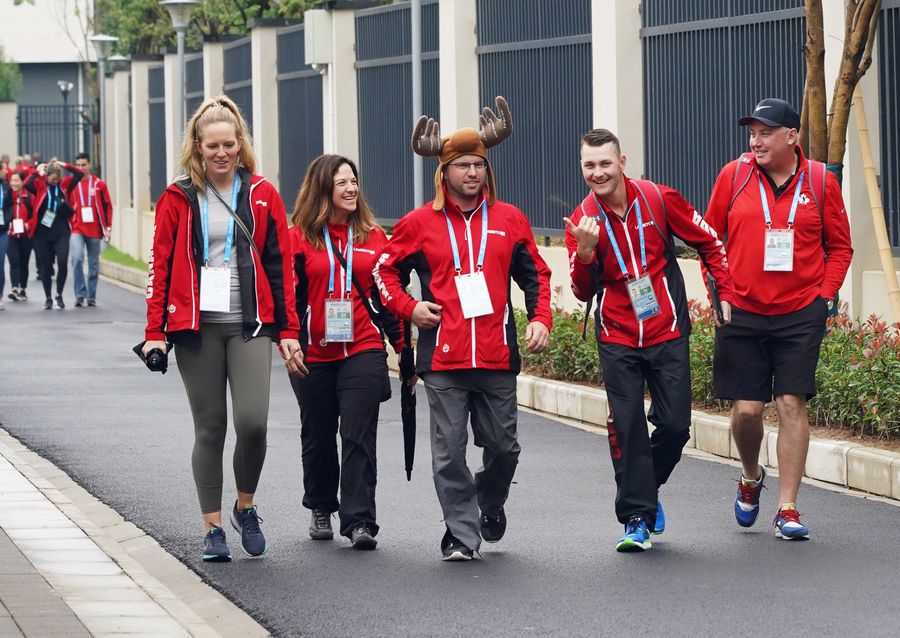 It’s the first Games to feature a newly-built athletes’ village. The lakeside compound, with 1,958 suites in 30 buildings, was completed in two years, with a speed of building one floor every five days.

“I was quite overwhelmed when I arrived here because it’s just so big and there’s thought about everything. The staffs here have done everything they can to make the athletes as comfortable as possible. I am pleased to see how much effort the Chinese people have put into the Military World Games,” Danish shooter Camilla Schriver told Xinhua in the village.

“Everything here is perfect. I can’t be more content about it. And I am surprised to have found the African champagne here in the canteen,” said Laury Pembouabeka, a boxer from the Republic of Congo.

Furthermore, there are numerous eye-catching elements outside the stadiums. Robots with cutting-edge AI technologies have played an essential role in the construction of the power supply system, which helps save energy and make the Games more eco-friendly.

And there’s a 5G network covering all the venues. The city is taking this opportunity to showcase its 5G-infrastructure construction.

Known as the “city of river and lakes,” Wuhan is the biggest city in the middle reaches of the Yangtze River. The rich water resources and green environment helped Wuhan win its bid to become the host city for the Games.

A cute creature called Bingbing, which in Mandarin is a reference to soldiers, is the Games’ mascot. Its design was inspired by the Chinese sturgeon – a critically endangered and strictly protected fish that has existed for more than 140 million years and is one of the oldest living animals in the Yangtze River. 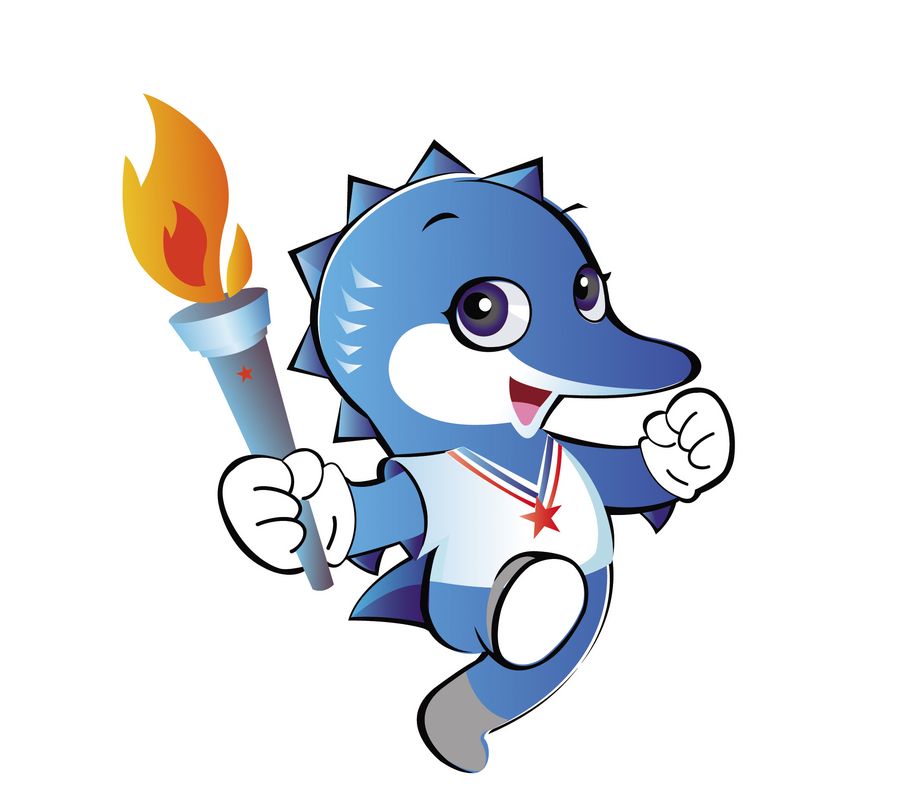 The mascot for the seventh Military World Games is released during a press conference held by China’s Ministry of National Defense in Wuhan, capital of central China’s Hubei Province

A stunning Military World Games-themed light show has been staged along the Yangtze River in Wuhan to celebrate the 70th anniversary of the founding of the People’s Republic of China, and it’s a sparkly symbol of the friendship and peace among the world’s militaries.

“I have been able to observe the very high-level organization demonstrated by the executive committee,” Herve Piccirillo told a press conference before the ceremony. “These Games will have nothing to envy to other world-class sports events and will allow the city of Wuhan to position itself as one of the major hubs of international sport.