A river between South and North Korean has turned red with the blood of pigs slaughtered as Seoul attempts to control the spread of African swine fever. 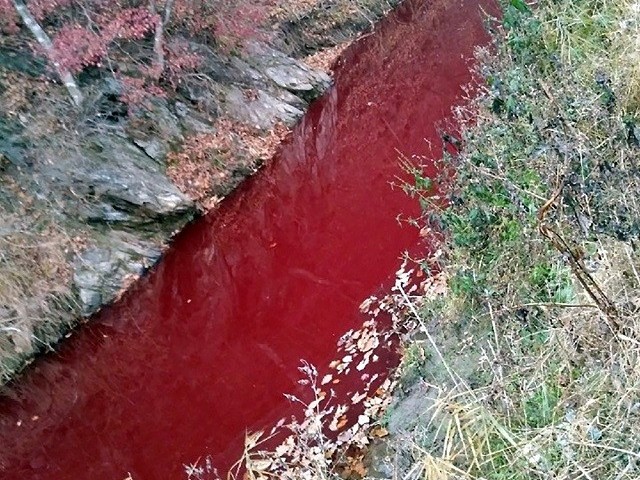 In a handout photo taken on November 10, 2019, and released on November 13 shows a river coloured red with pigs blood in Yeoncheon county near the Demilitarize Zone (DMZ) between North and South Korea. PHOTO: AFP

South Korea has culled around 380,000 pigs since the first case of the haemorrhagic disease – which is not dangerous to humans but is highly infectious in swine – was reported in September.

Pig cases are nearly always fatal and there is no antidote or vaccine, with the only known way to prevent the disease from spreading is a mass cull of livestock.

A local NGO said that heavy rains last week caused blood from a burial site near the inter-Korean border – where some 47,000 pig carcasses were piled up – to seep into the Imjin River on Sunday, turning some of the stream red.

“It made many people living in the area anxious and worried,” Lee Seok-woo, who heads the NGO Yeoncheon Imjin River Civic Network, told AFP.

“What was also hard to endure was the odour. I heard many farmers couldn’t work because of the unbearable smell. This should not have happened.”

Seoul’s environment ministry released a statement Wednesday saying the blood from pig carcasses flowing into the streams had now been “dealt with properly” using suction pumps and other devices, and the situation did not affect tap water in the region.

“We have built banks and other facilities so that the polluted water does not flow into the downstream region,” the ministry said, adding: “As of now there is no blood in the stream.”