The Indian Air Force (IAF) is set to get a shot in the arm amid continuing border standoff with China. The service has received the first two Mirage 2000 tactical bombers from France as part of a contract for 24 second-hand aircraft.

Two Mirage 2000 trainer jets arrived in India and joined the rest of the fleet at the Gwalior Airbase. In a separate development, the Ministry of Defense (MoD) has announced the procurement of a GSAT-7C communication satellite for the Indian Air Force.

“The Indian Air Force has received two Mirage 2000 trainer version aircraft from France. The two aircraft were flying with their Air Force and arrived at the Gwalior airbase recently,” government sources told ANI.

In September this year, India had announced that it would acquire two dozen second-hand Mirage 2000 tactical bombers from France. The reason cited for procuring these retired aircraft was that it would bolster the IAF’s aging fourth-generation Mirage fighter fleet.

Tactical bombing is a concept of aerial bombing aimed at targets of immediate and important military value like key defense installations or equipment including missile defense systems, radars or key bases.

Even as this decision drew flak from defense analysts and veterans, it was understood as a decision at smart budgeting and a military imperative to face the threat posed by China in the backdrop of growing tensions at the border.

Mirage is a single-engine, single-seat, air defense, multi-role fighter of French origin. The aircraft was inducted into IAF in 1985.

In another development, the Defense Ministry announced the procurement of a GSAT-7C Communication satellite for the IAF. The decision was taken at a Defense Acquisition Council (DAC) meeting chaired by Defense Minister Rajnath Singh.

The MoD said in a statement that the GSAT-7C satellite and ground hubs for software-defined radios (SDRs) will improve the armed forces’ ability to communicate in a secure manner beyond Line of Sight in all conditions.

The trainer aircraft would now be upgraded to the latest standards as part of the Mirage upgrade program being taken up by the Hindustan Aeronautics Limited (HAL).

The two aircraft were acquired by the IAF as part of the program to make up the number of aircraft in the Mirage fighter fleet to around 50 since a few aircraft were earlier lost to accidents.

“The Indian Air Force has made a wise investment in finding spare parts for the Mirages in the form of retired French aircraft, which will allow the Air Force to sustain them until 2035,” an unnamed official was quoted as saying by ANI.

The Mirage upgrade arrangement between the French and Indian sides was meant to improve the capabilities of 51 jets, but some of the kits have been left-over owing to previous plane crashes. The same kits may now be installed on these two French Air Force planes to make them combat-ready.

In July 2011, the IAF awarded Dassault a contract to upgrade 51 Mirage 2000s to Mirage 2000 I/TI specifications with new avionics and missiles. Dassault was to install numerous equipment on the aircraft. Thales was responsible for the majority of the avionics and systems development, while MBDA was awarded a separate contract to provide and integrate MICA air-to-air missiles.

#IndianAirForce receives a boost to its fighter jet fleet as two-second hand #Mirage2000 fighter aircraft arrived from France at its Gwalior airbase.

Two aircraft acquired by @IAF_MCC as part of programme to make up the number of aircraft in Mirage fighter fleet to around 50.

HAL sources said a fatal accident in February 2019 involving an upgraded Mirage during a test flight, and the subsequent Covid-19 pandemic led to the delay. However, now the two retired aircraft that have been delivered to India will be used to bolster the program. 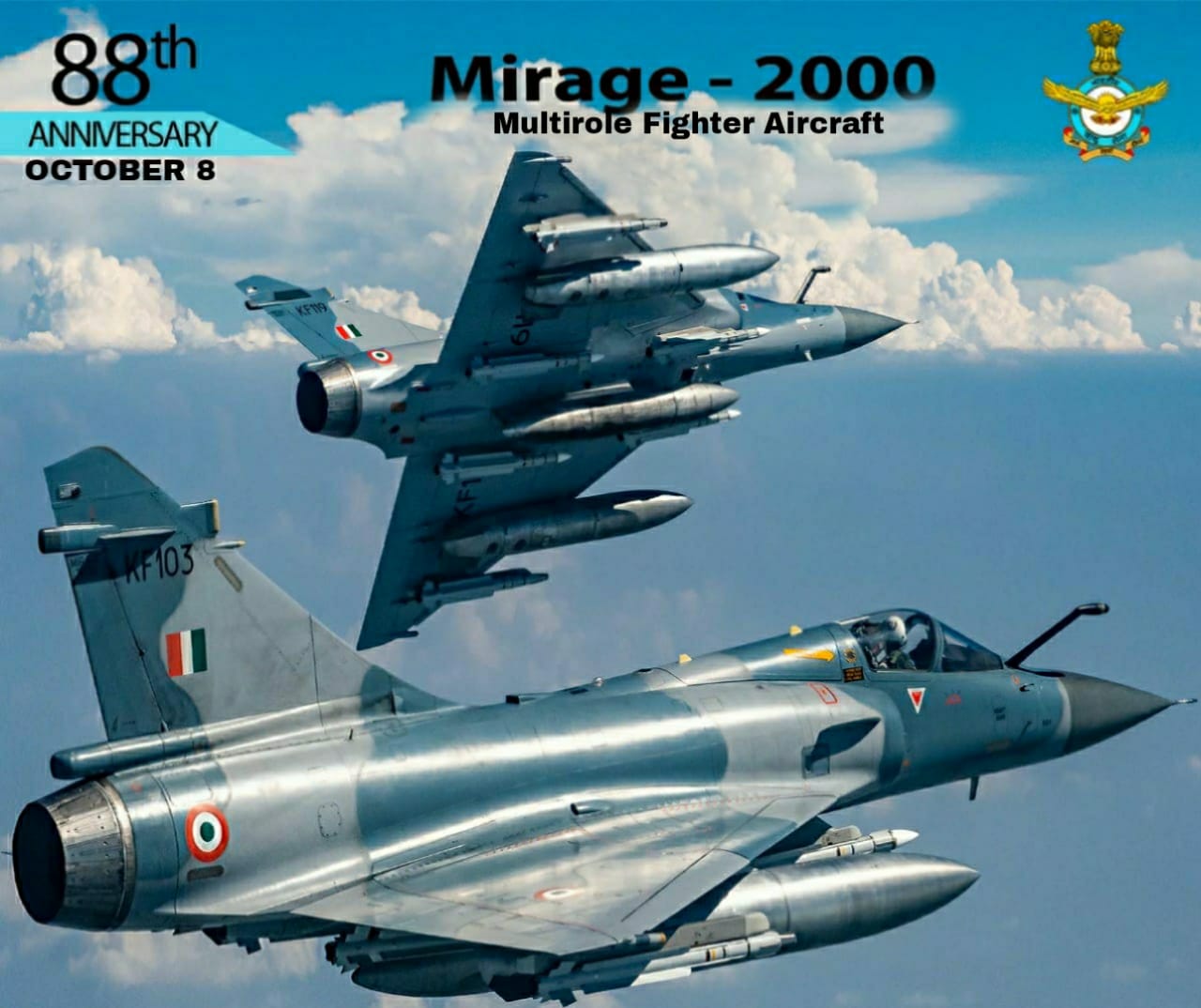 A new mission computer with more memory, a new radar, enhanced navigation and electronic warfare systems, and advanced communication and identification systems are all part of the upgrade. The planes are also expected to have a major cockpit makeover, including two lateral displays, glass cockpits, and helmet-mounted displays.

This will help India retain one of its most able fighters that proved its mettle in 2019 when it entered the Pakistani airspace and bombed the terrorist hideouts in the Balakot strike. Thereafter, it has made several sorties at the LAC after the conflict with China broke out in eastern Ladakh last year.

The GSAT series of geosynchronous communications satellites was designed and manufactured by the Indian Space Research Organisation (ISRO).

It aids the IAF’s communication capabilities. For starters, the satellite enables cross-connectivity between different ground radar stations, airbases, and Air Warning and Combat System aircraft such as the Beriev A-50 Phalcon and the DRDO AEW&CS.

The procurement proposal of Air Force was for GSAT-7C Satellite and Ground Hubs for real-time connectivity of Software Defined Radios(SDRs).

The project envisages complete design, development and launching of satellite in India.

Now with the addition of the GSAT-7C, the IAF’s capability is expected to rise exponentially and the communication is set to become more secure.

Ever since the conflict broke out at the LAC in 2020, India has made a series of weapons upgrades and new purchases to boost the overall military capability. The induction of second-hand Mirage 2000 jets and the integration of SPICE bombs are like to enhance India’s airpower amid the protracted border standoff with China.