Connect with us
An election advertisement banner, featuring Indian Prime Minister Narendra Modi and his Israeli counterpart Benjamin Netanyahu, has been spotted in Israel.  Benjamin Netanyahu can also be seen in other massive banners with US President Donald Trump and Russian President Vladimir Putin. 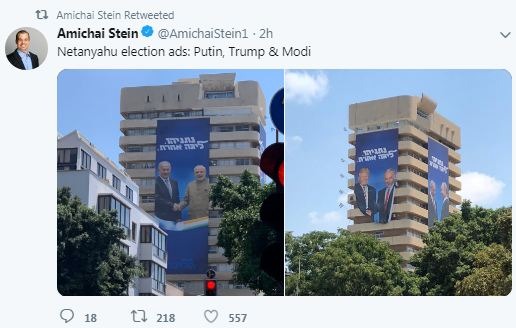 Israel is due to hold elections on September 17 and the banners appear to showcase PM Benjamin Netanyahu’s endeavours to strengthen the country’s relations with leading global powers.

Benjamin Netanyahu, who is the longest-serving PM in the country’s history, faces a fierce re-election bid this time. India and Israel share an extensive economic, defence and strategic relationship with each other besides PM Modi and PM Netanyahu’s strong personal rapport.

Earlier, as EurAsian Times reported, Israel PM Netanyahu will be visiting India and meeting PM Narendra Modi in September just days before he faces elections. Netanyahu was due to visit Delhi in February this year, also just ahead of the earlier Israeli election, which failed to give him a clear majority. He will now make a “short visit” to meet Prime Minister Narendra Modi possibly on Sept 9, which Israeli media described as a photo-op to boost his electoral profile.
Related Topics: