In a report published on Friday, The Washington Post, citing unnamed people familiar with the matter, said that the US spy agency had reached the conclusion that the Saudi de facto ruler – Mohammed bin Salman (MBS) had ordered the assassination, contradicting Riyadh’s claims that he was not involved in the killing.

According to The Washington Post, to which Khashoggi was a contributing columnist, in conducting its assessment, the CIA examined multiple sources of intelligence, including a phone call that the prince’s brother Khalid bin Salman, the Saudi ambassador to the US, had with the ill-fated journo, telling him to go to the Saudi diplomatic mission and giving him assurances that it would be safe to do so.

But shortly after the report was published, the Saudi ambassador to the US denied in a tweet he had spoken to the slain journalist by phone or had suggested he go to Turkey. 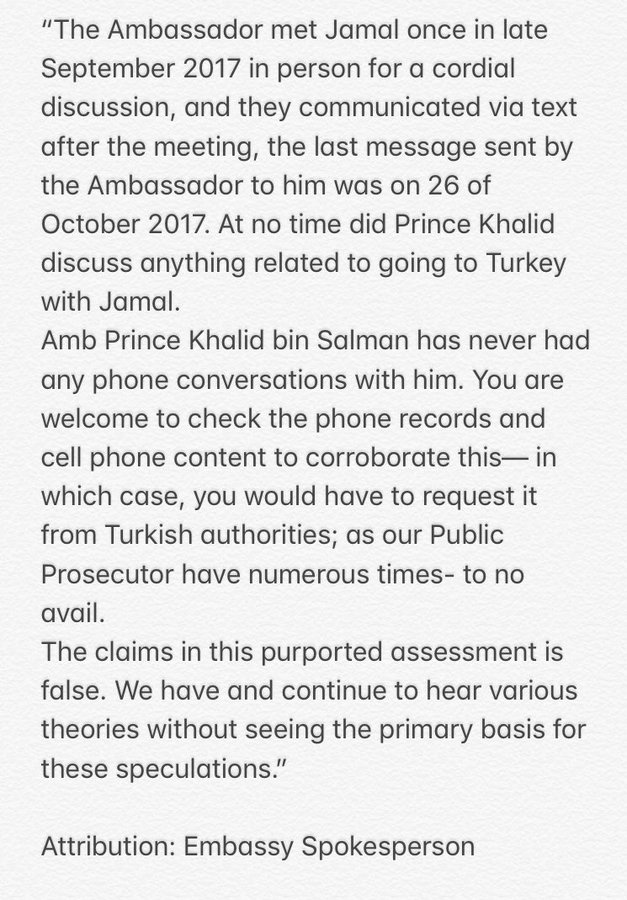 Unfortunately the @washingtonpost did not print our full response. This is a serious accusation and should not be left to anonymous sources. Our full response was the following:

Khashoggi, 59, an ardent critic of Mohammed bin Salman (MBS), disappeared after he entered the Saudi diplomatic mission in Istanbul n October 2 to complete some paperwork for his marriage.

However, as diplomatic pressure developed on Riyadh, Saudi Attorney General Sheikh Saud al-Mojeb admitted that Khashoggi had been killed in a “premeditated” attack in the consulate.

Saudi authorities have so far said that they do not know the whereabouts of the journo’s body, which is widely believed to be dismembered or dissolved in acid, or both. Earlier this month, Istanbul Chief Public Prosecutor Irfan Fidan said the ill-fated journalist had been strangled upon his arrival in the consulate, and then his body was dismembered and destroyed.

On Thursday, the Saudi public prosecutor released the results of the long-awaited investigation into the death of Khashoggi, saying a team of Saudi agents who had been dispatched to Istanbul with orders to bring him home alive had instead killed the journalist and dismembered his body.

“After the murder the victim’s body was dismembered by the individuals that have committed the murder and was transferred outside the consulate building,” the statement said, concluding that the murder had been authorized by a minor official.

Riyadh claims that the Saudi royal family had no prior knowledge about any murder plot.

The prosecutor’s conclusion contradicted assertions by Turkish President Recep Tayyip Erdogan, who had said the orders to kill Khashoggi had come from “the highest levels of the Saudi government.”

Now, the CIA’s assessment is the most definitive to date linking the crown prince to the operation and complicates the efforts made by US President Donald Trump’s administration to preserve its relationship with a close ally.

The American president has so far resisted pinning the blame for the killing on Mohammed bin Salman, who holds a close relationship with Jared Kushner, Trump’s son-in-law and senior adviser.

The CIA, according to the report, also examined a call placed from inside the diplomatic mission after murdering Khashoggi by an alleged member of the Saudi hit team, Maher Mutreb, a security official who has often been seen at Mohammed bin Salman’s side and who was photographed entering and exiting the consulate on the day of the killing.

“Deadly Trio” – With Typhoon, Rafale & F-15 In Its Armory, Meet The Only Air Force To Operate World’s ‘Best Jets’

After £20B ‘British Snub’ To China, Another Nuclear Project Faces The Heat Over Chinese Involvement