Israel Prime Minister Benjamin Netanyahu has advocated the traditional Hindu solution to check the spread of deadly coronavirus i.e. to shun the traditional handshake with  “Namaste.” “Namaste” is the customary way to greet each other in India with folded hands. 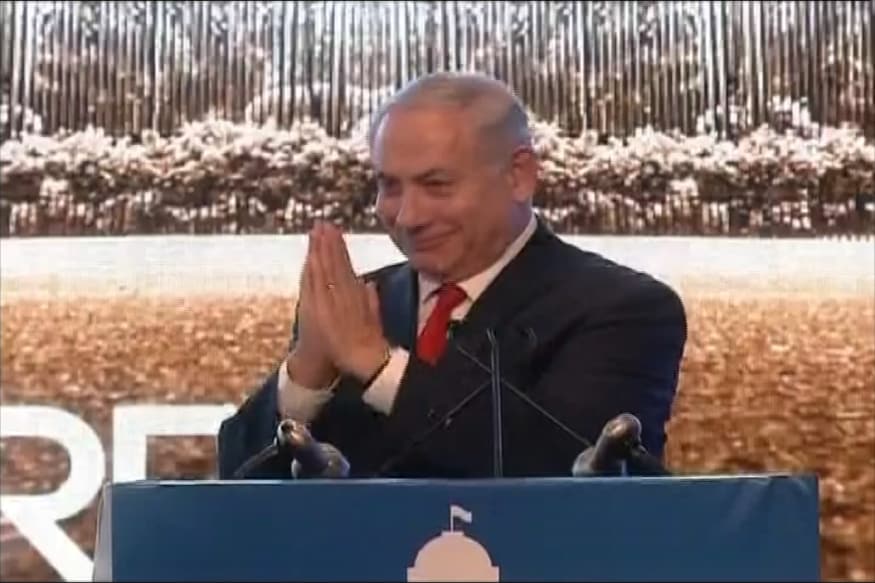 PM Benjamin Netanyahu got going in a joint press conference with Health Minister Yaakov Litzman, stating that the world was in the midst of a global pandemic and that it could be “among the most dangerous of such pandemics in the past 100 years.”

Boasting the point that “Israel is in the best situation of all other countries, together with another two or three Western countries,” Netanyahu added that Israel’s plenty of prudence has, so far, paid off. “We were compelled to take harsh – even very harsh – measures in order to slow the pace of the spread of the disease in Israel, and indeed this has happened,” he said.

The press conference unveiled measures that are perhaps the most extreme in Western countries with relatively few diagnosed cases of coronavirus. Only 15 Israelis had tested positive for coronavirus so far, with all cases traced to overseas sources of infection and no fatalities.

Health Ministry Director-General Moshe Bar Siman said: “the very reason we are in such a good situation, and the reason I know every single infected person and where they got their infection from, is because we put very definitive rules in place early.”

He warned: “Once we reach the point where we identify people with the disease from whom we don’t know the source of the infection, we will have to take even more drastic measures.” Bar Siman Tov cited the example of Italy, where all schools, universities and public gatherings of any kind have been shut down, and entire cities and regions sealed off.

The restraints meant to continue to curtail and slow the virus’ spread include requiring all Israelis returning from Germany, Spain, France, Switzerland and Austria to enter into 14 days of self-isolation, effective immediately.

Those nations were added to a list that already includes Italy, China, South Korea, Thailand, Japan, Singapore and Vietnam. The increased requirements are believed to affect more than 100,000 Israelis.

All global conferences were shut down, while Israelis returning from any international gathering, no matter where it took place, had to go through quarantine. Any Israeli who had returned from any foreign trip was prohibited to attend gatherings of 100 people or more.

Health workers have been forbidden to travel overseas, while anyone over 60 or with a chronic illness was told to avoid contact with anyone returning from an overseas trip.

Prime Minister of Israel Benjamin Netanyahu @netanyahu encourages Israelis to adopt the Indian way of greeting #Namaste at a press conference to mitigate the spread of #coronavirus pic.twitter.com/gtSKzBDjl4

Netanyahu also asked Israelis to adopt a new greeting instead of the handshake. “You can adopt the Indian practice – you can say ‘Namaste’ – or you can say ‘Shalom.’ But find the way, any way, to avoid shaking hands,” he cautioned.

Armenian PM Nikol Pashinyan’s remarks on why the Russian-made Iskander ballistic missiles did not explode during the Nagorno-Karabakh conflict created a sensation in the...
Read more
Load more