The Nanjing massacre in which 300,000 Chinese people were killed in a barbarous attack by the imperial Japanese troops is often called the “forgotten holocaust of World War II”.

Remembering the victims of the Nanjing Massacre on its 83rd anniversary (December 13), Chen Xi, a senior functionary of the Communist Party of China, called it “an inhuman act in human history”. This year China marked the massacre’s seventh national memorial ceremony, which was announced in 2014.

The Nanjing massacre has also been described as one of the most barbaric episodes in the history of World War II although it officially began on September 1, 1939.

During the “Chinese war of resistance against Japanese aggression”, the Japanese troops had launched missile attacks on the Chinese capital city Nanjing after they failed to get the Chinese soldiers to surrender on December 9, 1937, according to a website detailing the massacre.

The Japanese forces had entered the city from different directions and the city fell under the control of the Japanese army on  December 13, 1937.  The Japanese forces not only killed unarmed civilians, but they were tortured, humiliated, and women were raped over a period of six weeks. These episodes were sometimes called ‘The Rape of Nanking, because of a large number of reported sexual assaults.

Japanese historian Shūdō Higashinakano, however, dismisses these allegations, stating there is no evidence to support these claims.

China alleges the civilians and prisoners of war were not only buried alive but were also used to practice bayoneting. Even the germ warfare experiments were done during the invasion of the Chinese city.

A CGTN report claims Japan used Chinese people to study the impact of livestock bacteria on humans. The report quotes a daughter of a Japanese soldier, Misako Watanabe, who says that her father felt sorry for what he had done to the Chinese people.

As China mourned the 83-year-old devastation of the city, Chinese news website Sina has claimed that Twitter showed its “double-standards” by removing the posts on the Nanjing massacre.

It has alleged that in an attempt to alter history, Twitter removed the posts by Chinese scholars; at the same time, the social media platform promoted posts by right-wing Japanese users, who question the authenticity of the atrocities committed by the Japanese troops. 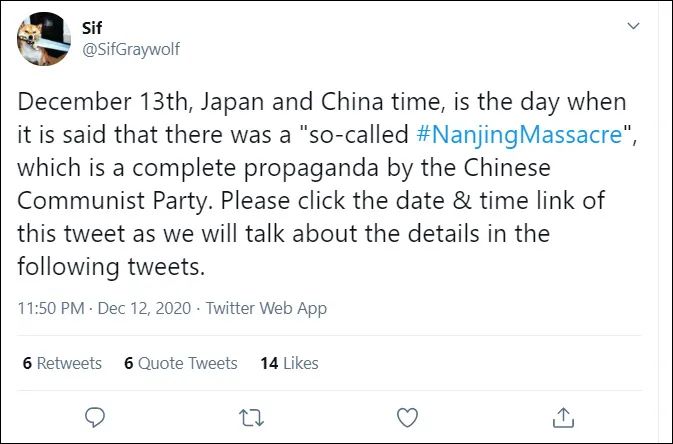 The website has quoted a Japanese Twitter user who apparently said, “why the death toll increases every year”. As per Sina, Oberver.com verified that Twitter froze the account of the Chinese users who were sharing historical material on the Nanjing massacre.

It said that most of the photos posted by users were internationally recognized historical pictures. One such example was a screenshot of a Japanese news report that recorded evidence of the brutality of Japanese war criminals and the executioners of the Nanjing massacre.

In her best-selling book, The Rape of Nanking: The Forgotten Holocaust of World War II, author Iris Chang appeals to the Japanese government and people to face up to the truth about Japan’s wartime government and, most importantly, to improve the education of future generations of Japanese citizens about the massacre.

Previous article
Has Actor Tom Cruise Become The 1st Person Ever To Fly The USAF SR-72 “Darkstar” In Top Gun: Maverick?
Next article
China Equips Its PLA Soldiers With New Gloves, Quick-Dry Underwear As They Face The ‘Ladakh Warriors’