Next-Flashpoint Or Secret Deal: What Is Cooking In Doklam Between India, China & Bhutan?

India has not yet made any official comment on the controversy over a“Chinese village” in the Doklam plateau. The row was triggered by a Chinese journalist’s tweet claiming that a new Chinese village has come up inside the Bhutanese territory.

On Sunday, Indian news channel NDTV used satellite imagery to hint at a renewed Chinese threat near Doklam at the trijunction of China, Bhutan, and India — something Bhutan has categorically rejected.

Open-source intelligence @detresfa_ also claimed that the fresh build-up would allow “a greater understanding of how the sector has been reinforced over time to ensure the PLA’s ability in maintaining its ‘territorial claims’. “

Following this exclusive around #Doklam, here's an expanded area visual that covers not #China's encroachment into #Bhutan but also allows a greater understanding of how the sector has been reinforced over time to ensure the PLA's ability in maintaining its "territorial claims" https://t.co/9VSb0T1BrT pic.twitter.com/z8Glw5Cfes

Commenting on the development, a China analyst from India said, “A Chinese journalist’s tweet that claimed China has constructed a village within 2 km inside the Bhutanese territory near the Doklam Plateau has been later deleted by the author himself. The Bhutanese govt has denied that there is any incursion/encroachment of its territory.

“India considers the Doklam plateau as an undisputed part of Bhutanese territory, but China considers it as an extension of its Chumbi Valley, the wedge of land that lies between Sikkim and Bhutan. The plateau is approximately 89 square km, with a width of less than 10 km,” the analyst, who did not wish to be named, told The Eurasian Times.

Earlier, there were talks that the Bhutanese and Chinese were on the verge of a deal. “The Chinese holding line in the contentious region is likely to become the working boundary between the two,” he maintained.

“One scenario is that: Bhutan and China have agreed to a deal, and chosen to keep it under wraps. Second, this is part of Chinese psy-ops, meant to give the perception that there is a ‘second front’ besides Ladakh,” the analyst added.

The expanded area visuals show the construction of ammunition storage bunkers, a surface-to-air missile site, and a heliport built in the accessible range of the disputed site by China during 2019-20. The images also show a 9km road into Bhutan and the newly-developed Pangda village inside the Bhutanese territory. 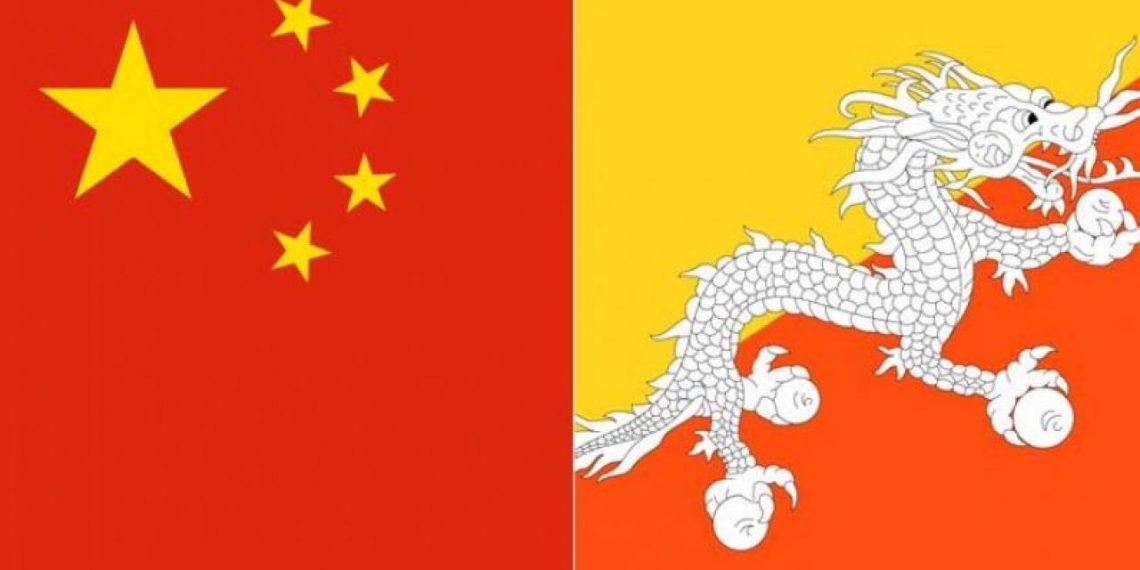 In the event of another 2017-like Doklam stand-off, the PLA would be able to maintain its hold due to the full armored facility available in the area. On Sunday, NDTV had first shown the 9km road within Bhutanese territory on the eastern periphery of the contested Doklam plateau.

The report said that this road could be an alternative route for Chinese forces to reach the Zompelri ridge. This access was blocked by the Indian Army in 2017. The Zompelri ridge lies further south and its access would give Chinese forces a clear view of the strategically-important ‘Chicken’s Neck – the Siliguri corridor — the land that links the northeast of India with the rest of the country.

This image, labelled by Maxar imagery experts, shows the known Bhutan-China boundary with the location of the village clearly inside Bhutan. The key question, unanswered so far, has Bhutan changed its border to suit Beijing??:@Maxar pic.twitter.com/Ic8lSJkH0x

The Chinese army has managed to build a new road along the banks of the Torsa River, which extends southwards from the border between China and Bhutan and is less than 10km from the site of the 2017 stand-off.

The controversy began when Shen Shiwei, a senior producer with CGTN, China’s state-sponsored media, released images of a village with several chalets by the side of a river. He tweeted, ”Now, we have permanent residents living in the newly established Pangda village. It’s along the valley, 35 km south to Yadong country. Here is a map to show the location.” The tweet was subsequently deleted.

An Australian satellite imagery expert with a Canberra-based think tank, Nathan Ruser, had also claimed that the location of the village that Shen had tweeted was 2.5 kilometers inside the Bhutanese border.

Here's a CGTN news producer openly admiting that China has occupied and now populated part of a sovereign country. This Pangda village has been constructed (as shown by the included map) ~2.5km beyond Bhutan's international border. China now baselessly claims about 12% of Bhutan. https://t.co/3TxNSffYdJ pic.twitter.com/fEAgWXk7Ln

However, Bhutan has dismissed all the encroachment claims. In a statement to NDTV, Bhutan’s ambassador to India, Major General V. Namgyel said, ”There is no Chinese village inside Bhutan”.

While he refused to comment on the realigning of the border in the contested area, the ambassador admitted that Bhutan and China were involved in border talks. Bhutanese journalist Tenzing Lamsang noted that Bhutan border troops had not reported any such construction of a village in that area.

With regard to the satellite imagery, he said: “As for ‘Google lines’ on the map, Bhutan and China do not negotiate based on ‘Google Map’ but claim lines based on detailed cartographic maps and ground features. Each side has its own maximalist claim lines.”

Have seen and read reports of the Chinese allegedly building a village 2 km inside Bhutan in Doklam area.

However, as per reliable sources in Bhutan there is no ‘Chinese village’ constructed inside Bhutan.

The 70-day Doklam face-off in 2017 had culminated in an agreement on withdrawal by the two sides but China continued to make its presence felt in the surrounding region.