US-China War: Not Taiwan, But This ‘Little Islands’ Is The Biggest ‘Bone Of Contention’ Between The US & China

The South China Sea has been a bone of contention between the US and China ever since Beijing has laid claims to most part of the Sea, through which global trade worth more than $5 trillion passes every year. Vietnam, Malaysia, Brunei, the Philippines, and Taiwan have rival claims over the sea.

China controls the strategically-important Spratly Islands and Paracel Islands, which house naval garrisons, coastguard personnel, maritime inspectors, meteorological observation stations, and other scientific research centers, as well as rest stops for Chinese fishermen. The islands are used by Beijing as its military bases.

China’s ministry of defense had acknowledged the militarization of the islands and said that China has a “natural right as a sovereign nation” to deploy troops and military equipment to its bases in the Spratly Islands.

To significantly boost its ability to control the disputed South China Sea, China has installed a high-frequency radar system in the Spratly Islands. A report in Chinese military magazine Naval and Merchant Ships claims that the most efficient way to beat the US in a conflict in the disputed waterway is with superiority in battlefield information.

Michael Dahm, a senior researcher at the Johns Hopkins University Applied Physics Laboratory in the US, wrote in the online South China Sea Military Capabilities series, saying the artificial islands were equipped with substantial C4ISR capabilities and counter-C4ISR capabilities – a US defense acronym for command, control, communications, computers used in intelligence, surveillance, and reconnaissance (ISR).

The communication network is capable of interrupting the US military communications system. The ISR capabilities could cover the whole region, including military activity at the US Palawan airbase in the Philippines but the magazine article points out that they were also vulnerable to a hard attack, with their remote location and lack of survivable systems. 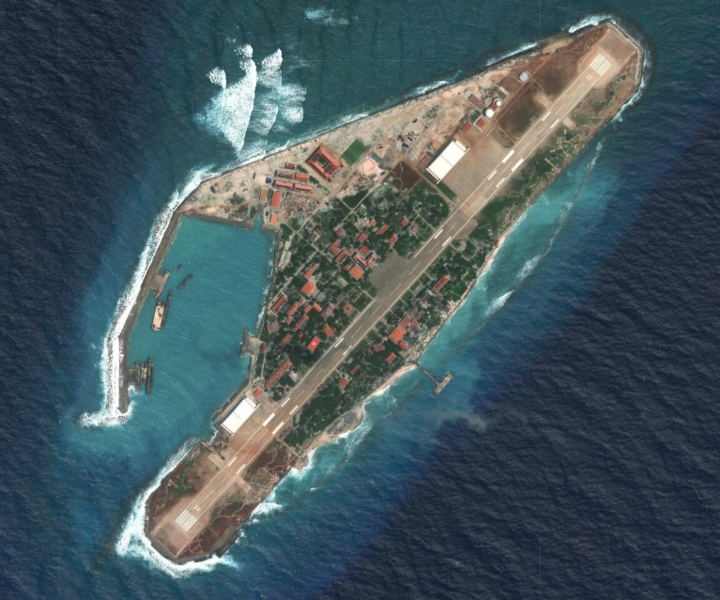 The article stated that in case the US deployed aircraft carrier strike groups, strategic bombers or even nuclear submarines with Tomahawk missiles to destroy the whole island network, China would retaliate with an attack on US military bases in eastern and western Asia.

“The island reefs are not only China’s outposts but an attractive ‘bait’ to trap rivals,” it said.

The US Department of State has said Beijing had no legal grounds to unilaterally impose its will on the region and no lawful territorial or maritime claim to Mischief Reef, which is the largest artificial island in the Spratlys.

A report by the Asian Maritime Transparency Initiative at Washington’s Center for Strategic and International Studies had revealed the wide details on China’s communication network in islets in 2018.

It had said that the satellite images showed high-frequency radar installation, which would significantly bolster China’s ability to monitor surface and air traffic across the southern portion of the South China Sea.

The report quoted by Reuters stated that the images showed that China appeared to have constructed a buried bunker and lighthouse on the northern portion of the feature, a helipad, communications equipment, and a quay with a loading crane.

A high-frequency radar on Cuarteron Reef increases China’s ability to monitor sea and air traffic coming north from the Malacca Straits and other important channels, the report added.

Previous article
India’s Two Neighbors – Bhutan & Bangladesh Sign First-Ever Preferential Trade Agreement
Next article
Watch: Neither US Nor Israel, This Tiny Country Is Set To Acquire The Most Powerful, Heavy-Duty Jets From Boeing