The 46th session of the Council of Foreign Ministers (CFM) that concluded in Abu Dhabi on Saturday, reiterated that “Jammu and Kashmir remained the core dispute between Pakistan and India” and “its resolution is essential for peace in South Asia”. 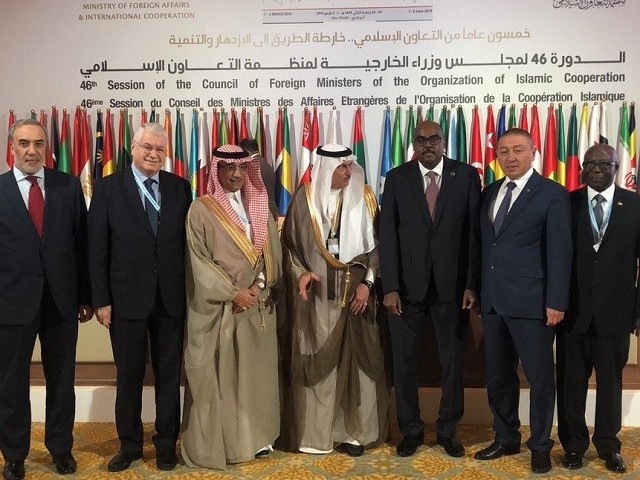 “The OIC resolution also condemned the recent wave of Indian aggression in Jammu and Kashmir and expressed deep concern over the atrocities and human rights violations in Kashmir,” the statement said.

“The resolution also reminded the international community of its obligation to ensure implementation of UN Security Council resolutions on the Jammu and Kashmir dispute,” the FO statement added.

About the current volatile situation in the region, the OIC member states adopted another resolution sponsored by Pakistan, which expressed grave concern over the Indian violation of Pakistani airspace; affirmed Pakistan’s right to self-defence; and urged India to refrain from the threat or use of force.

“This OIC resolution on regional peace and security in South Asia also welcomed Prime Minister Imran Khan’s renewed offer of dialogue to India and the goodwill gesture of handing over the Indian pilot,” it added.

It may be mentioned that Pakistan boycotted the plenary session of the 46th CFM at the Foreign Minister level due to the presence of Indian External Affairs Minister Sushma Swaraj as a ‘guest of honour’.

Before the current escalation in tensions between Pakistan and India, the former was quietly pushing the UAE to withdraw the invitation given the fact that the decision was taken without consulting other member countries.

The controversy came into the open after India violated Pakistan’s airspace on Tuesday and launched what it said were “preemptive strikes” targeting the alleged terrorist camps of Jaish-e-Muhammad (JeM). A day later, Pakistan retaliated with across the Line of Control air strikes. The Pakistani fighter jets not only shot down an Indian warplane but also took its pilot into custody.

The resolution called for restraint and de-escalation and stressed the need for resolving the outstanding issues through peaceful means. The OIC also adopted two other resolutions sponsored by Pakistan on international disarmament and non-proliferation issues and reform of the UN Security Council.

In a significant development, the OIC elected Pakistan as a member of its Independent Permanent Human Rights Commission from the Asian region in acknowledgement of Pakistan’s constructive contribution to human rights discourse, norms and policies, the FO said.

Though Pakistan boycotted the plenary session of the 46th CFM at the foreign ministers’ level, the strong OIC support to the people of Jammu and Kashmir and the centrality of this core issue to regional peace “is recognition of the key role that Pakistan plays as a founding OIC member”, it added.

Previous article
MIG 21 vs F-16: Can a 3rd Generation MIG-21 Really Shoot-Down A Hi-Tech F-16 Fighter Jet?
Next article
India May Sign Major ‘Defence Pact’ With The US To Thwart Pakistan-China Nexus