Outdated & Irrelevant, Why Is India Still Testing Prithvi Missiles When It Has Pralay, Prahar & BrahMos In Its Arsenal

In a press release, India’s Ministry of Defense (MoD) said, “A successful training launch of a short-range ballistic missile, Prithvi-II, was carried out on January 10 from the Integrated Test Range, Chandipur off the coast of Odisha.

A well-established system, the Prithvi-II missile, has been an integral part of India’s nuclear deterrence. The missile struck its target with high accuracy. The user training launch successfully validated the missile’s operational and technical parameters.”

But why did India test Prithvi II, a short-range ballistic missile (SRBM) that it had already decided to discard in favor of the more potent varieties of “Pralay” and “Prahar,” not to speak of the supersonic Brahmos cruise missiles?

The last time the Defense Research and Development Organization (DRDO), the maker of the Prithvi II, tested the missile was in June 2022. It had done that during “night time as part of a user training trial” from a test range off the Odisha coast.

Earlier, Prithvi-II also was successfully test-fired during nighttime on February 21, 2018, from the ITR at Chandipur. Later on November 20, 2019, two trials consecutively of Prithvi-II were conducted successfully during the night from the same base.

It may be noted that the Prithvi series of SRBMS – Prithvi I, Prithvi II, and Prithvi III – was born out of the DRDO’s Integrated Guide Missiles Development Program (IGMDP), which was launched on July 27, 1983, under the able stewardship of late Indian President Dr. APJ Abdul Kalam.

The Prithvi I class has a range of 150 kilometers and a maximum warhead mounting capability of 1,000 kilograms. It can be launched using transporter erector launchers and has a 10–50 meter accuracy. The Indian Army has been its principal end-user.

Prithvi-II has a maximum warhead mounting capability of 500 kilograms and a 250 kilometers (160 mi) range. It has been upgraded, with its range increasing to 350 kilometers, and the payload capacity has also been increased to 500 to 1000 kilograms. The Indian Air Force is the primary user of this missile.

Prithvi missiles can carry nuclear warheads. The I and II versions are liquid-propelled, whereas the Prithvi III versions, essentially made for the Indian Navy, is a  two-stage surface-to-surface missile, with the first stage being solid-fueled and the second stage liquid-fueled.

Prithvi-II Vs Pralay And Prahar Missiles

Prithvi I and Prithvi II were the ones that were supposed to be “outdated” and increasingly “irrelevant,” mainly because they are liquid-propelled, and there are now more reliable, accurate and robust longer-range missiles.

It is said that being a liquid-fueled rocket, the Prithvi missile is extremely difficult to handle and must be refueled before launch. Liquid fuels are highly corrosive, which means they ruin metal storage containers. If liquid fuel is held in a missile for an extended period, the missile will corrode or leak.

This deficiency made the DRDO produce Pralay, which is solid fuelled and boasts the most modern electronics. And Prithvi missiles were scheduled to be withdrawn in a phased manner.

The Pralay is a canisterized missile; as a result, it can be transported in a sturdy metal container designed to store chemicals or gases. It follows a desired Quasi Ballistic Trajectory, a low, curved route an object travels when thrown or shot.

Additionally, it is capable of direction and range changes. It also carries Multiple warheads (MIRVs), including false warheads, to confuse enemy anti-missile defenses.

It is designed to destroy enemy radar and communication installations, command and control centers, and airfields. One of its most significant advantages is that it is road mobile and fulfills the Indian Army’s requirement of a conventionally armed tactical ballistic missile that is not hampered by India’s ‘No First Use nuclear policy.

It may be noted that former Chief of Defense Staff (CDS), the late General Bipin Rawat, was a great votary of the idea that Pralay, along with the BrahMos supersonic cruise missile, would form the crux of India’s planned Rocket Force to meet the border threats from both Pakistan and China.

Besides, the DRDO is working on Prahar. The Prahar is a road-mobile, all-terrain, all-weather, single-stage, solid-fuelled SSM with an effective strike range from 60 to 150 km.

This Tactical Ballistic Missile (TBM) can carry conventional High Explosive (HE), nuclear or sub-munition payloads. Prahaar is mounted on and launched from a road-based Transporter-Erector-Launcher (TEL) with six missiles.

The TEL can be operated in stand-alone mode, thus giving the missile significant flexibility in deployment and operation. 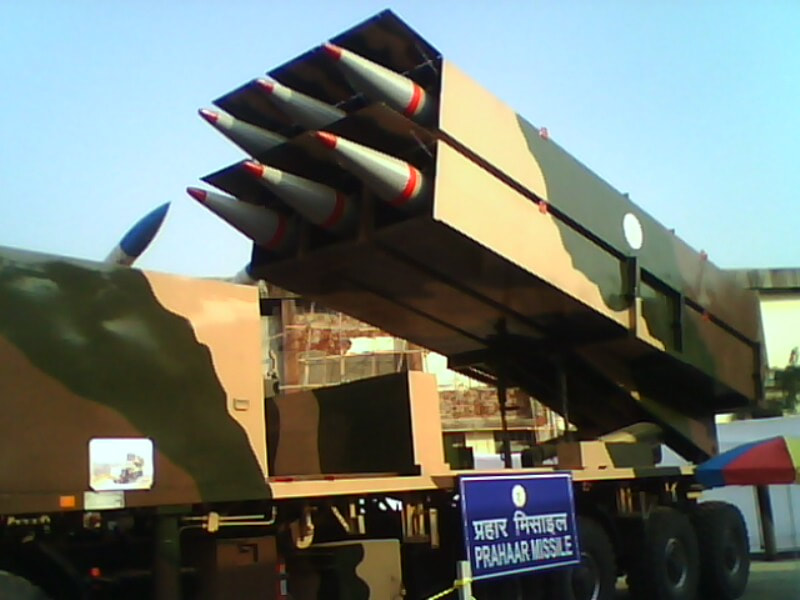 The TEL can be deployed in less than five minutes and launch the missiles in salvos at different targets spanning a wide arc, with no prior preparation!

“The Prahaar is also expected to counter Pakistan’s Hatf-IX or Nasr nuclear capable TBM, believed to have been developed to strike India’s mechanized forces on the battlefield,” says Brig Arvind Dhananjayan (Retd).

It is against this background that the testing of Prithvi II could surprise many, particularly a group of strategic analysts who have been arguing that with much more sophisticated missiles that they possess, it is time for India and Pakistan to decommission outdated first-generation missiles like Prithvi I & II and HATF 1 & 2 respectively.

In doing so, they will have a better confidence-building measure (CBM) without intruding on the continuing modernization of both sides’ strategic forces, so the argument goes.

Now, let us see the merits of this proposition. As a matter of principle, one should have no problem declaring that CBMs are always desirable. However, the question arises whether they are doable or realizable.

And when one talks of the CBMs, they usually are of three types—multilateral, bilateral, and unilateral. The proposed CBMs are not multilateral in the strict sense of the term, but any disarmament/arms control measure between India and Pakistan goes beyond bilateral realms, thanks to the factor of China.

Unlike Pakistan, whose security concerns are India-centric, India’s potential challenges also emanate from China in a big way. In that sense, Indo-Pak CBMs are easier said than done because, in many instances, the weapon systems that Pakistan has procured in toto from China and, in some cases, stored in Chinese territory.

Now let us look at the existing CBMs between India and Pakistan. One is “the Prohibition of Attack Against Nuclear Facilities,” signed by Indian Prime Minister Rajiv Gandhi and Pakistani Prime Minister Benazir Bhutto on December 31, 1988.

It was ratified in 1991 and implemented in January 1992. This requires an annual exchange of lists detailing the location of all nuclear-related facilities in each country. It is being done annually, though there have been occasions when the two sides have not wholly accepted the exchanged list, that is, one side doubting the authenticity of the list of the other.

Another CBM has been the establishment of hotlines between the military commanders of the two sides at the DGMO level (agreed upon after the 1971 war) and between the two Prime Ministers (decided in 1987).

This also has not exactly worked always. As regards the hotline between the Prime Ministers, it was not used after 1990. It worked briefly during the Kargil War, though it is said that it can be restarted at concise notice.

Any military activities are not allowed within a five kilometers range of the border. However, this agreement of pre-notification has been more honored in the breach than in the observance.

The same has been the case with the agreement on non-violation of Air Space (made in 1991 and implemented in 1992) that envisages that fighter aircraft are not allowed to enter within 10 kilometers of foreign space (logistic aircraft and unarmed air traffic are permitted up to 1000 meters from the international border and flights within the given range are allowed for rescue or supply of goods only after the advance notice issued by the governments).

In Siachen Glacier, the rules of this agreement have not been applied, with helicopters of both countries being shot down.

It may be noted here that in February 1999, Prime Ministers Vajpayee and Nawaz Sharif met in Lahore and agreed to a series of CBMs that dealt with the terms of nuclear risk reduction.

The Lahore Declaration emphasized measures to improve nuclear security and prevent an accidental nuclear exchange. One of the measures sought to avoid nuclear weapons’ accidental or unauthorized use. Another called for the creation of communication mechanisms similar in some aspects to those required by “the Convention on Early Notification of a Nuclear Accident.”

The two sides also committed to exchanging information on their nuclear doctrines and security concepts; preventing accidental nuclear crises; working on measures to improve control over their nuclear weapons; and strengthening their respective moratoriums on nuclear testing by binding their commitments.

But then the world knows what happened three months later—the Kargil war. The Lahore Declaration became a part of history.

Thus, CBMs between India and Pakistan at a bilateral level have many handicaps to overcome. There is a huge trust deficit, which, in turn, is due to the fragile politics of Pakistan, where the military justifies its overwhelming dominance in the name of countering “survival threats” from India and achieving “strategic parity” with India.

It is not the civilian government in Pakistan but the military that has the last word on geopolitical issues. Thus, the inherent discomforts at the political level adversely affect “transparency” and verification,” the two essential components for the success of any CBMs, let alone those between India and Pakistan.

Thus, Prithvi I and II cannot be discarded to create a new CBM between India and Pakistan. And the fact that Prithvi II is being tested means that it perhaps has not outlived its purpose and that India’s strategic decision-makers are not convinced that Prithvi missiles are obsolete.

Even otherwise, as a former senior DRDO scientist Ravi Kumar Gupta says, “testing Prithvi the other day may provide a lesson to the launching – process or system of similar missiles in the future. We may not make Prithvi, but the launching process with all its implications, such as operational and technical parameters, may remain valid for the types of Pralay and Prahar in the coming days. After all, many of the components used in making Prithvi could be the same for other newer SRBMs.”

Gupta seems to have a point, as missiles borrow technologies and components from other systems made by the same developer, which, in India’s case, happens to be the DRDO.