Maryam Nawaz lambasted PM Imran Khan on Tuesday for being an incapable premier. Maryam Nawaz was addressing a gathering in Lahore to mark Youm-e-Takbeer, when Pakistan conducted nuclear tests on May 28, 1998. Maryam Nawaz paid rich tributes to dad Nawaz Sharif for “making Pakistan a nuclear power” and blasted Imran Khan for degrading Pakistan.

“Don’t hide behind institutions,” she said addressing Prime Minister Imran. “If Nawaz was out [of jail] today, this [PTI’s] government would not last.” “All his interviews, his speeches have been about Nawaz Sharif,” said Maryam, asking the premier to focus his attention elsewhere.

“You might be a selected leader, but you are the ‘incapable’ premier of Pakistan — wake up, and serve the country and its people.” 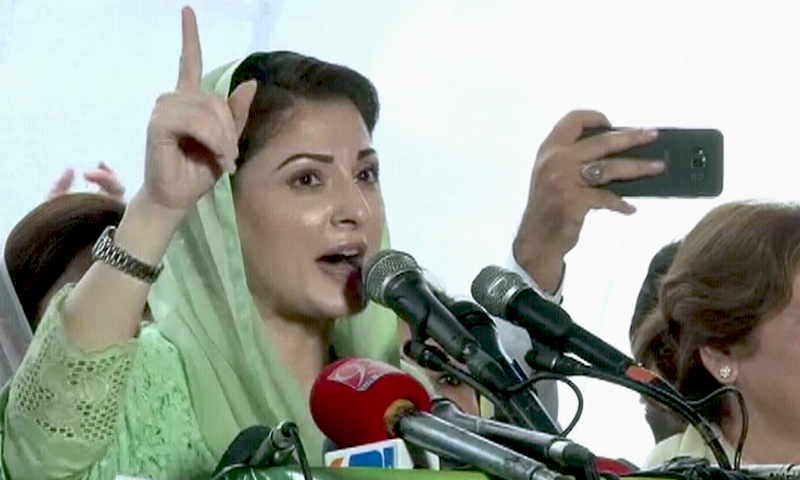 “This is the same Modi who came to Pakistan during Nawaz’s time. Why don’t people take your phone calls? Why do people not talk to you? Because you stole your way into power,” she continued. “You are a puppet, you dance on someone’s instructions. This is why no country is willing to give you respect.”

As the crowd chanted “government is scared of one brave woman”, Maryam said: “Yes, they are very scared.”

“As we celebrate Youm-e-Takbeer, we need to ask why is it that despite being a nuclear power, our country is still not stable. Why is our incapable premier still roaming around with a kashkol [begging bowl]?”

“When Pakistan conducted [nuclear] tests, Nawaz Sharif did not ask for money from anyone.

“Despite severe restrictions at that time, Nawaz did not let the economy collapse. And then there is you [Prime Minister Imran], who mortgaged the country for $6 billion from the International Monetary Fund (IMF).”

Maryam’s fiery speech comes a day after the Election Commission of Pakistan (ECP) issued a notice to her, seeking a reply to a Pakistan Tehreek-i-Insaf’s (PTI) petition challenging her appointment as PML-N vice president.

The commission has fixed June 17 as the date for hearing the plea.

Leaving Pakistan In Limbo, Turkey To Deliver The First T129 ATAK Helicopter To The Philippines Next Month

Why US May Finally Admit The Loss Of Pakistani F-16 Fighter To MiG-21 Bison As IAF Pilot Gets Gallantry Award?