By EurAsian Times Desk
March 31, 2019
Indian Pilot Abhinandan Varthaman got a hero’s welcome when he returned back to India after being briefly detained by Pakistan Army after his fighter jet was shot down by the PAF. But Abhinandan Varthaman’s moustache continues to mesmerize people, especially in Pakistan.

Abhinandan is believed to have shot down an F-16 fighter jet of Pakistan Air Force before ejecting from his crashed MiG-21 Bison and being detained by the Pakistan Army. He was handed over to India two days later, in a “gesture of peace”, in Pakistan PMImran Khan’s words.
However, the brave officer is still the talk of the town in Pakistan, albeit for wrong reasons.
Of late, an insensitive advertisement apparently published by an educational start-up based in Multan has taken the social media by storm as it virtually insults Abhinandan.
The advertisement of TeachAt Network carries a photo of the officer along with a text: “Professional bann, Abhinandan na bann” which translates to “Be a professional, not like Abhinandan”.
View image on Twitter 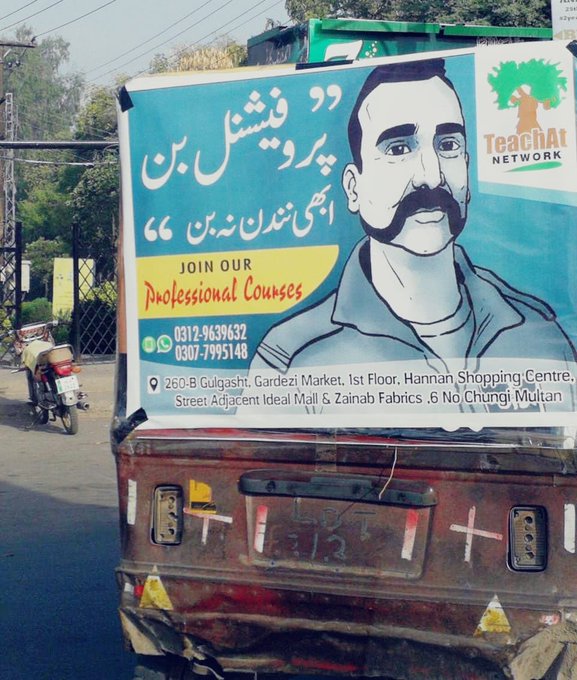 The air forces of India and Pakistan engaged in an aerial skirmish a day after a fleet of IAF fighter jets crossed the border to pound a major training camp of Jaish-e-Mohammad at Balakot. The operation came 12 days after the terror outfit orchestrated an attack at Pulwama in Jammu and Kashmir, killing 40 CRPF Jawans.
Previous article
Another MiG Crashes in India; Pilot Ejects Safely
Next article
Brenton Tarrant – The New Zealand Mosque Attacker Complaints About Prison Treatment