The Pakistan Army has always looked for both conventional and unconventional methods to create trouble in Jammu and Kashmir. From overt and covert terror operations to smear propaganda in Kashmir Valley and from luring youths in the name of Jihad to deceiving the global community with lies and deception, Islamabad has left no stone unturned to undermine Indian democracy in Jammu and Kashmir.

Politicians Arrested, Internet Suspended, Curfew Like Situation: What Next In Kashmir?

As part of their campaign, the Pakistan Army and ISI operatives have been involved in ‘honey trapping’ both the vulnerable youth of Kashmir and the officials of the Indian defence forces to extract classified information.

Now according to reports, a very interesting job is on the offer which was posted on a University website in Pakistan. 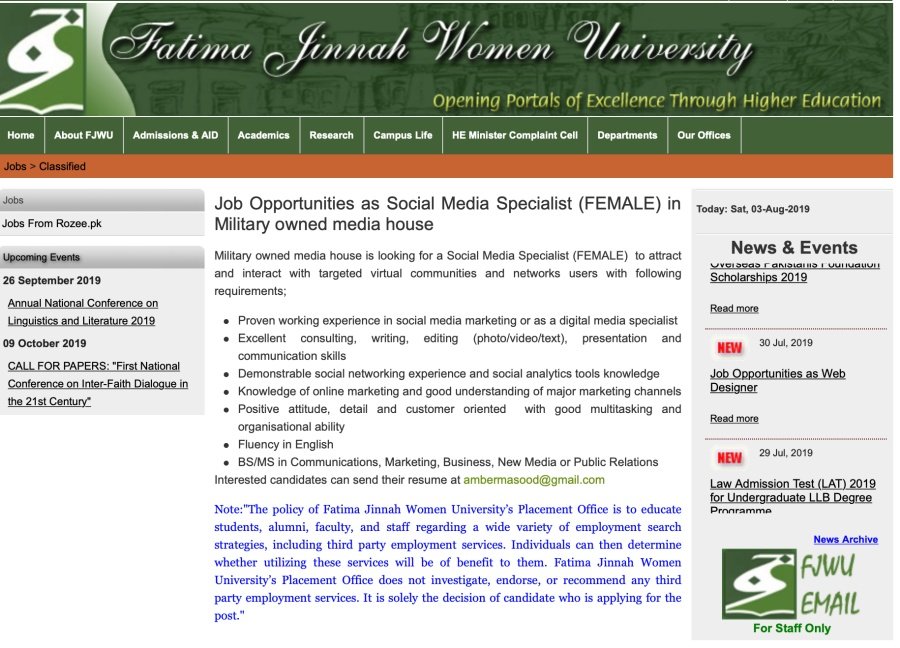 The Pakistan Army backed website wanted to recruit  ‘female’ Social Media Specialist to ‘attract and interact’ with ‘targeted virtual communities’ and ‘network users’. Experts wondered why a University wanted to recruit a ‘female only’ social media expert for a Military owned media house? The answer appears to be quite simple – honey-trapping the Indian army soldiers and other key defence personnel and extracting sensitive information.

The Indian Army has been cautioning their officers and jawans as well as their families not to post pictures on Facebook, Twitter and Instagram with soldiers in uniform or military equipment, installations and cantonments in the backdrop.

According to a previous report by Indian Today, it all starts when a ‘young and pretty female’ ‘likes’ your social media pictures and responds by saying: ‘Wow, Jai Hind or thank you for keeping us safe.’

Then the ISI operative disguised as a pretty woman demands more pictures with tanks, guns, aircraft, ships in the backdrop and information about current and past postings. The conversation slowly moves to direct messages and WhatsApp chats so that intimate photos and videos can be exchanged.

Eventually, the ISI operatives start to blackmails the ‘honey trapped’ soldier into sharing sensitive defence secrets. A massive number of such cases have hit the Indian Army, and many personnels have identified, questioned and arrested.

Previous article
Politicians Arrested, Internet Suspended, Curfew Like Situation: What Next In Kashmir?
Next article
Article 370 Abolished; Now You Can Buy Land In Jammu and Kashmir