Pakistan continues to attack India left, right and centre and Babri Masjid is the latest issue to join the growing list of concerns that Islamabad is not happy about.

While ? is grappling with unprecedented #COVID19, RSS-BJP combine is busy unabashedly advancing “Hindutva” agenda. The commencement of construction of a Mandir at the site of Babri Masjid is another step in this direction & Govt & people of ?? condemn it in the strongest terms. pic.twitter.com/1V4iWW7tvi

Denouncing the construction at Babri Masjid site, Pakistan Foreign Office spokesperson said while the world is fighting with COVID-19, the RSS-BJP due in India are busy with promoting the “Hindutva” agenda.

The Pakistan FO said that the construction of a Hindu Temple at the site of the historic Babri Masjid is another regrettable and people of Pakistan denounce it in the strongest way.

The FO statement noted that the work of the Temple construction is a continuation of the contentious judgment given by the Indian Supreme Court on 9 November 2019, which totally failed to uphold the demands of justice.

The Supreme Court’s ruling destroyed the fabric of so-called ‘secularism’ of India by confirming that minorities are not safe in India and that they have to worry for their lives, religion and places of worship. 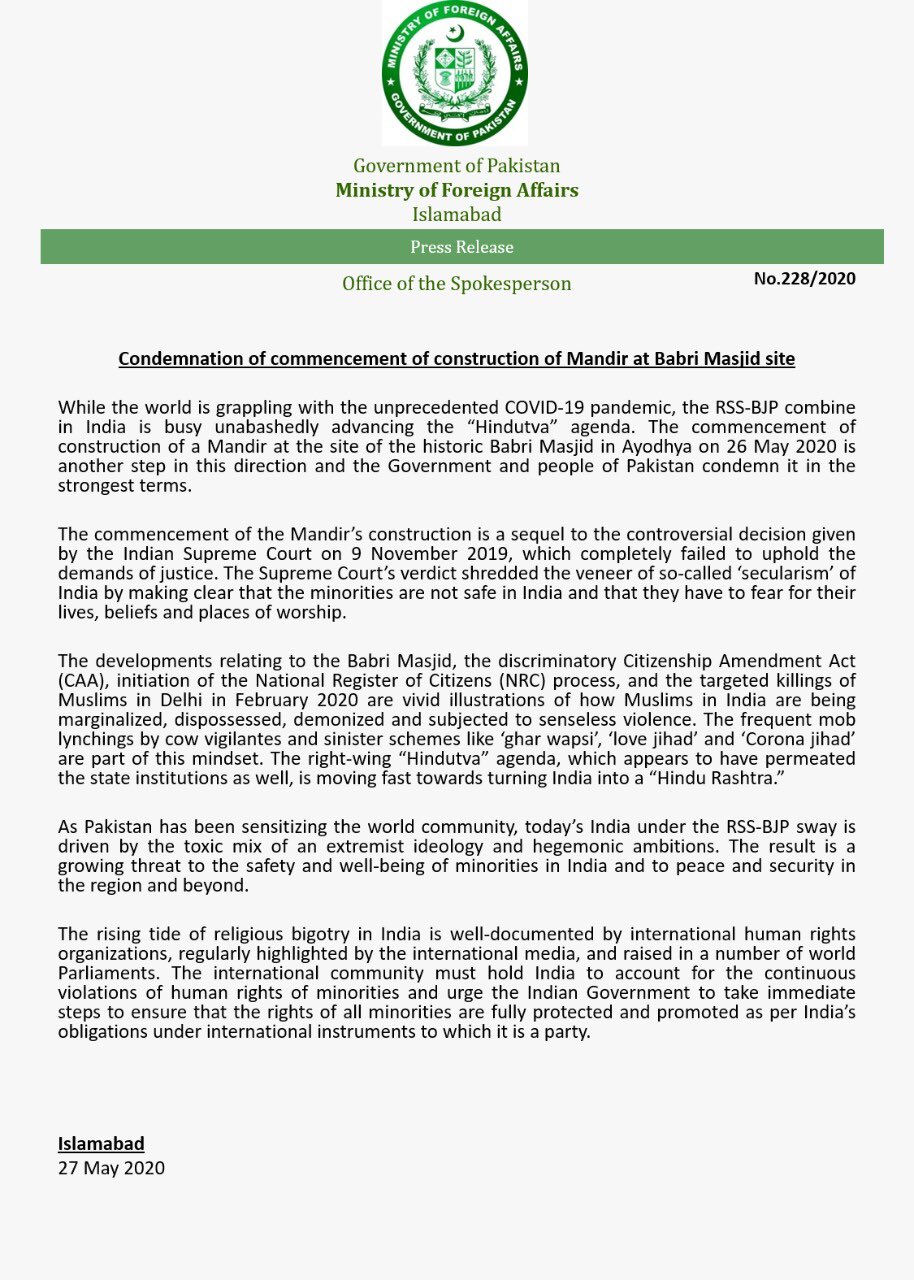 The spokesperson added the developments relating to the Babri Masjid, the Citizenship Amendment Act, initiation of the National Register of Citizens process, and the slaying of Muslims in Delhi are clear instances of how Muslims in India are being marginalized, dispossessed, demonized and subjected to pointless violence.

The now-common mob lynching and wicked schemes like ‘ghar wapsi’, ‘love jihad’ and ‘Corona jihad’ are part of this evil design. The right-wing “Hindutva” agenda, which appears to have penetrated the government as well, is moving fast towards transforming India into a “Hindu Rashtra (Hindu Nation).”

The FO further added that the increasing tide of religious fascism in India is well-documented by global human rights watchdogs, frequently covered by the foreign media, and raised in a number of world Parliaments.