Should China Be Removed From 2022 Olympics Over Beijing’s Brutal Crackdown On Uighurs and Christians? OPED

Did The US Air Force Build, Test And Fly A ‘New Prototype Of 6th-Generation Fighter Jet’?

Why Joe Biden Will Always Be A Bad Omen For Pakistan & How Russia, China Could Help It Counterbalance The US?

Pakistan has moved its missile and strategic weapons closer to the Indian border as tensions between both nations have been escalating after unrelenting cross border shelling along the Line of Control.

The satellite images indicated the new position of the missiles which is now nearer to the Indian border. The LY-80 missile is believed to have been strategically moved to a base in the city of Lahore which is just 14 miles away from the India- Pakistan border, reports the Express.co.uk 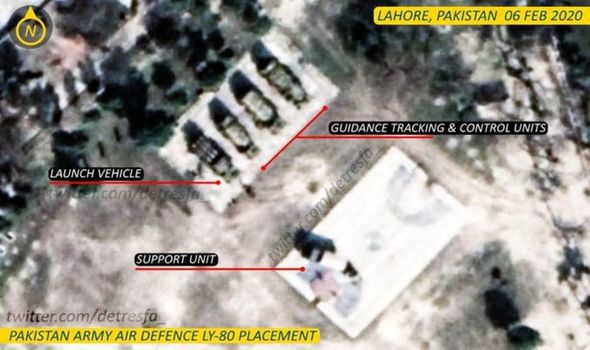 The LY-80 aka HQ16A is a Chinese-manufactured medium-range missile system with the ability to engage aerial targets at high altitude and can intercept targets at a distance of40km.

First used by the Pakistan army in  March 2017, the LY-80 missile is also equipped with six firing missile containers locked in two rows of three, which can shoot at a speed in excess of 600mph.

The decision to move their missiles closer to India can be seen as a threatening gesture as the two countries are engaged in brutal disputes over Kashmir. India also accuses Pakistan of sending militants across the border and fan separatism in the region.

A Twitter account linked to Iran’s Supreme Leader Ayatollah Ali Khamenei was on Friday banned by the microblogging site for posting an image, in...
Read more

As India and Japan are getting closer to Myanmar militarily to counter China, the Southeast Asian nation has not forgotten its old ally Russia....
Read more