In a special naval base in Pakistan’s capital Karachi, H.I Sutton writing for the Forbes asserts that Pakistan Navy has a secret, mini-submarine, that Pakistan Navy’s Special Service Group (SSG-N) has at its disposal. 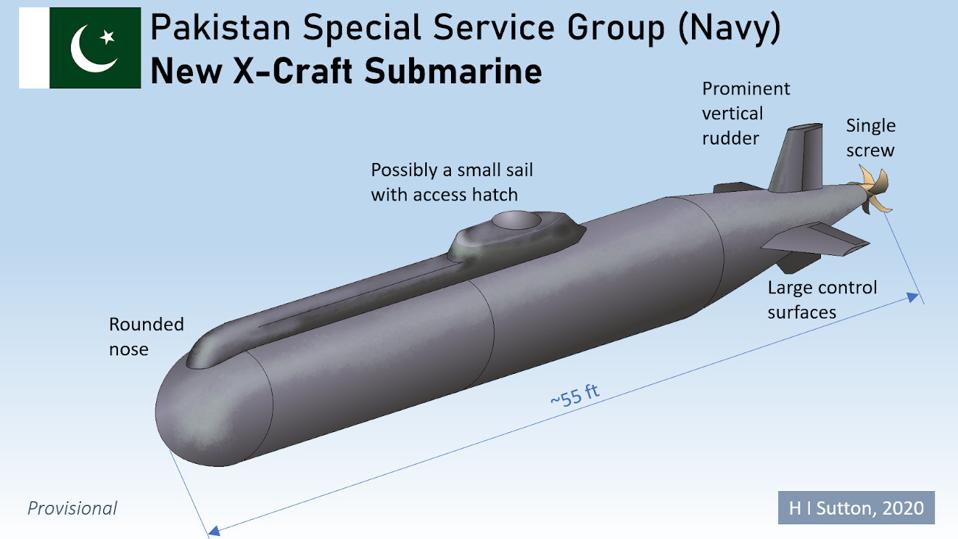 This is an artist’s first impression of the submarine. Measuring around 55 feet long by 7 to 8 feet across, it is a small forces type which means that is a fraction of the size 0f a real submarine.

Judging from its location and size it is said to be used by the Navy’s Special Service Group, known as SSG (N). The SEAL terminology it uses is borrowed from the US Navy SEALs and is considered as an equivalent given their long history of training with the American unit.

An  X-Craft by category, this was a term inherited after the Italian manufacturer  Cos.Mo.S (commonly written Cosmos) sold two sets of midget submarines to Pakistan in the past. An equivalent of the X craft in the American navy SEAL is a submarine  Dry Combat Submersible (DCS) now entering service.

It may be intended to replace the Pakistani Navy’s existing X-Craft. Pakistan operates three MG-110 X-Craft which were built locally between 1993 and 1996. They are getting long in the tooth and are due for replacement.

But the Italian firm which designed them, Cos.Mo.S was closed down twenty years ago. Today its designs are continued by respected Italian manufacturer Drass. They offer a series of modern X-Craft that may be ideal for Pakistan, writes  Sutton.

Although there are not many clues about the first appearance of the submarine, one clue relates it to a statement in the Pakistani Defence Production Division (MoDP) 2015-16 yearbook which listed the “Indigenous design and construction of 01 Midget Submarine” as a target for 2016-2017.

Reports like this also highlight the involvement of the Turkish firm STM (Savunma Teknolojileri Mühendislik ve Ticaret A.Ş.) which could have developed a mini-submarine for Pakistan.

Writing about the unclear operational status of the submarine, Sutton says the analysis of commercial satellite imagery shows that the boat rarely (if ever) goes in the water. The submarine is maintained well as the tent that covers it is moved and changed quite often.  Despite these details, what it’s called and what exactly it does remains unclear.

Previous articleChina Blasts The US For Halting WHO Funding; Can Beijing Fund It By Itself?
Next articleSpanish Researchers Find Additional Symptoms Of Covid-19 Prevalent In Europe

Armenian PM Nikol Pashinyan’s remarks on why the Russian-made Iskander ballistic missiles did not explode during the Nagorno-Karabakh conflict created a sensation in the...
Read more
Load more