In an effort to quell Indian claims of attacking terror infrastructure in Balakot and killing over 300 terrorists, Pakistan invited international journalists and diplomats to access the Balakot district of Khyber Pakhtunkhwa. This development comes nearly after 1.5 months of Indian attacks, which probably has given Islamabad ample time to clear the site – Indian experts stated.

A group of international media journalists mostly India based and Ambassadors & Defence Attachés of various countries in Pakistan visited impact site of 26 February Indian air violation near Jabba, Balakot. Saw the ground realities anti to Indian claims for themselves. pic.twitter.com/XsONflGGVP

As per reports in Pakistan Media, the visitors were shown the crater in barren open space, created after an Indian Air Force (IAF) jet dropped its payload while fleeing, and the nearby madrassa New Delhi had claimed it destroyed in the so-called air strike. 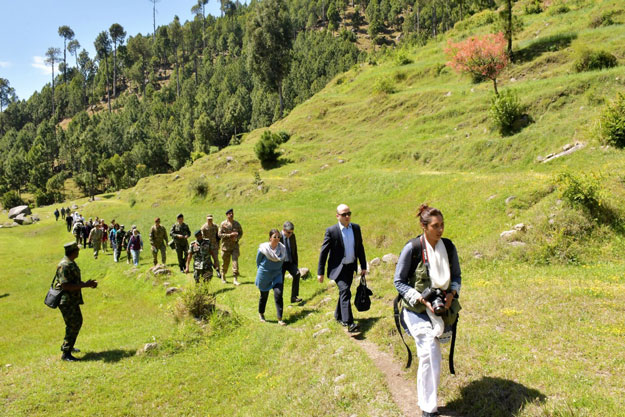 According to the ISPR, the group also visited a nearby madrassa about which India had claimed it had struck and killed scores of terrorists there. The delegation interacted with the children studying there.

“Visitors freely interacted with students, children and teachers and saw for themselves that madrassa stood on ground untouched with only innocent local children receiving education,” Maj-Gen Asif Ghafoor said.

“Instead of pursuing false claims, [India] should accept the reality, stay a responsible state for peace in the region and especially look inward to identify reasons for out of hand situation inside Jammu & Kashmir,” the ISPR chief said. 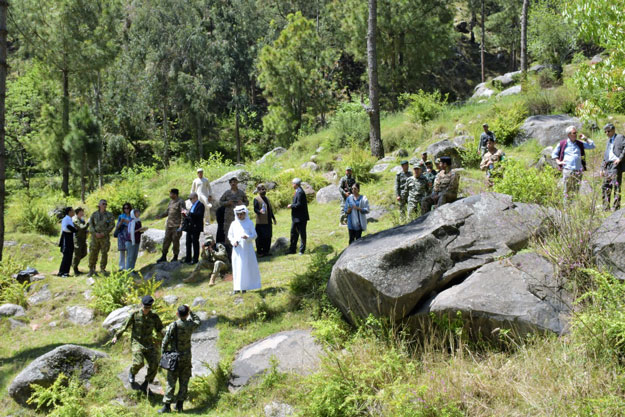 The APS is established by the Pakistan Army as a gift to the resilient people of Swat in recognition of their contributions and sacrifices in defeating terrorism as terrorists had especially targeted educational institutions during the unrest.

According to the ISPR, Sabaoon is a rehabilitation facility for psychologically treating indoctrinated juvenile and help them return to normal life and become useful citizens of society.

Next day, Pakistan Air Force (PAF) shot down two Indian jets in an aerial dogfight and captured an Indian pilot. The pilot was subsequently released as a goodwill gesture. India later claimed that it shot down a Pakistani F-16. 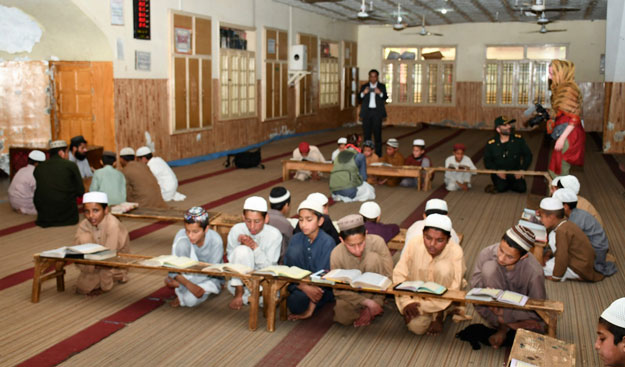 However, all the Indian claims were proved wrong. International media had immediately refuted New Delhi’s claim of hitting the madrassa. Last week, a prestigious US-based magazine, Foreign Policy said that US officials have confirmed that all the Pakistani F-16 jets are accounted for.

According to BBC Urdu, the group was flown from Islamabad in a helicopter to Jabba in Balakot. The visitors then trekked for about one-and-a-half hour to reach the madrassa on the top of a mountain surrounded by lush green trees.

The group, while going up, also saw a crater on a hillside where Indian jets had dropped its payload. About 150 students, aged 12-13, were present inside the seminary building and were being taught Quran when the group reached inside the madrassa, the report said.

Setback To Pakistan, US Says ‘Did Not Count’ Pakistani F-16 Fighter Jets

“This is an old madrassa and has always been like this,” BBC Urdu quoted Maj-Gen Asif Ghafoor as saying, while interacting with the journalists, most of them from India. “You can see for yourself, there is no truth in India’s claims.”

This was the first formal visit to the area by foreign media—mostly from India – and Pakistan-based diplomats. The trip fortified Pakistan’s firm stance that India failed to destroy any structure or kill anyone on February 26 and belied the jingoistic propaganda unleashed by the Indian media.

Previous articleNot India, But Vietnam May Become The Next ‘Global Factory’ Replacing China
Next articleTurkey Vows To Stand With Pakistan Against All Adversaries