Pakistan on Thursday strongly denounced the killing of Riyaz Naikoo, a top militant commander of Hizbul Mujahideen in Jammu and Kashmir. Pakistan Foreign Office termed it as “a fake encounter” and called Riyaz Naikoo as Kashmir’s indigenous resistance fighter.

Riyaz Naikoo, a former mathematics teacher was the head of Hizbul Mujahideen in Jammu and Kashmir Valley. Naikoo is categorised as A++ Militant in the Indian security force’s list of Top Militant Commanders in Valley.

Naikoo has been a strong advocator of Pakistan in the Kashmir region and has been involved in several murder cases, including the murder of policemen. Riyaz Naikoo has also released many videos threatening informers and local policemen to stay away from anti-militancy operations and is believed to be backed by a massive network of Over Ground Worker.

Without explicitly mentioning the killing of Naikoo, the Pakistan Foreign Office spokesperson on expressed serious concerns over the so-called “brutal military crackdown by the Indian security forces.

US Ignores Russia For Moon Mining Pact; Can China, India Join Moscow For A Similar Mission?

“It is a matter of serious concern that the situation in Jammu and Kashmir continues to worsen due to the brutal military crackdown by the Indian forces,” Aisha Farooqui told reporters via a video link.

She said Pakistan firmly denounced the continuing state-terrorism and extrajudicial killings of innocent Kashmiris in so-called “cordon-and-search” operations in the region.

Despite the surge in COVID-19 cases in the J&K, the Indian forces continue their ruthless operations of persecution and brutalization of the Kashmiri people. Kashmiris are being killed in fraudulent encounters and phony cordon-and-search operations,” the spokesperson said.

In a heartless system, even the mortal remains of those killed are not being handed over to the families (referring to Riyaz Naikoo). Thousands of Kashmiri men, women and children are taking to the streets to oppose Indian savagenesses and to let the global community know that they repudiate unlawful Indian occupation.

There are reports of Indian forces shooting pellet guns and bullets on nonviolent demonstrators, killing at least one innocent Kashmiri and wounding scores of others. These Indian actions are extremely condemnable,” the spokesperson added.

The FO also said that New Delhi must understand that it cannot crush the determination of the Kashmir people and stifle their indigenous resistance movement through the use of brute military force.  The heightened resistance in the region is a direct outcome of the Indian drive of persecution and brutalization of Kashmiri people.

While inciting the global community about such a possibility, Pakistan consistently asks India to abstain from any reckless move which could have grave entanglements for peace and security in the region. We also urge the international community to work for warranting the peaceful resolution of the Jammu and Kashmir dispute in accordance with the United Nations Security Council (UNSC) resolutions and the wishes of the Kashmiri people,” the FO concluded. 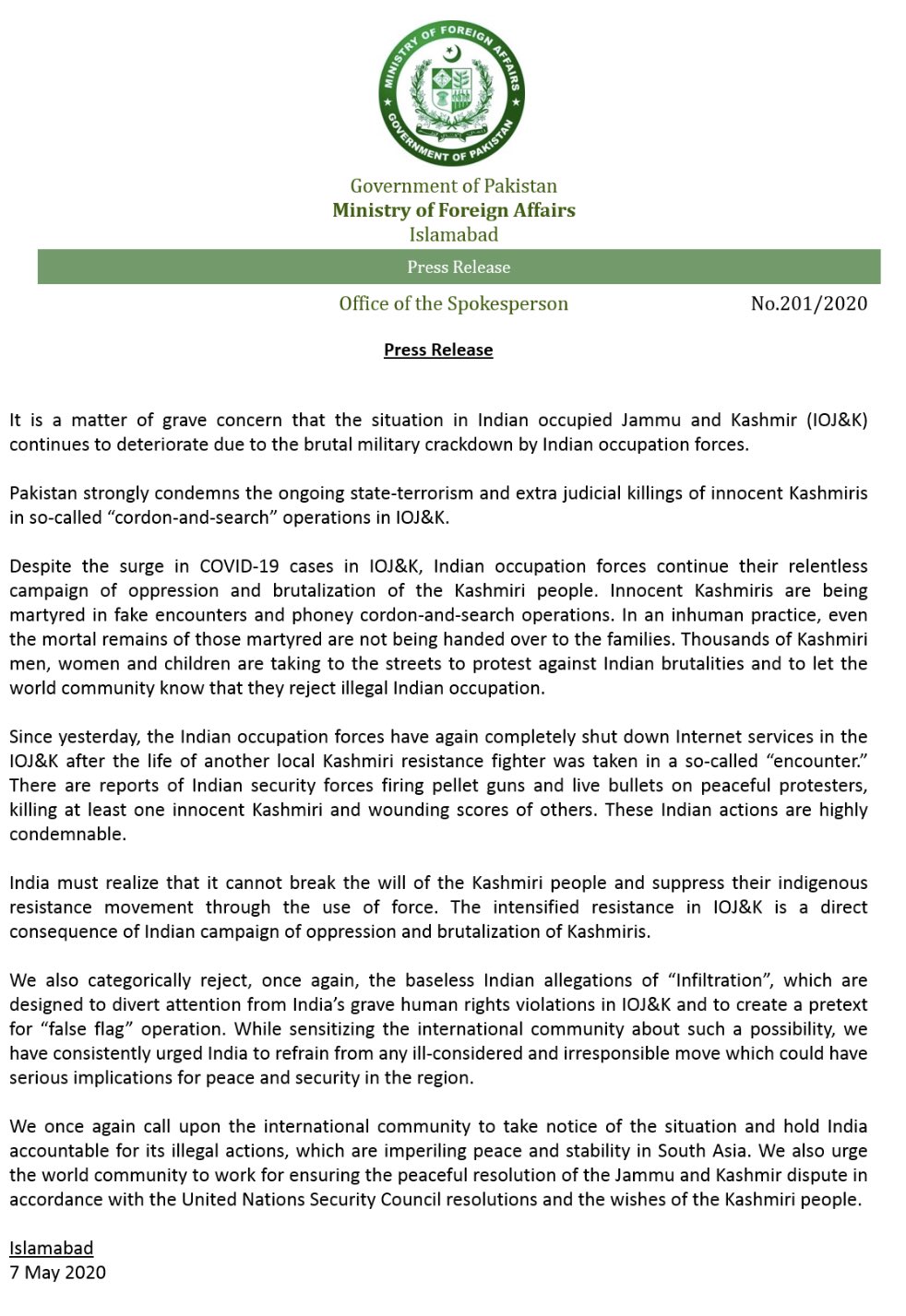 ‘Made In Russia, Recycled In Ukraine’ — Putin’s Best Fighter Bombers Are Being Sold As Souvenirs In Ukraine