Pakistan Train Blast: At least 65 people have been killed in a train blast in Pakistan after a fire broke out in Tezgam Express. The train was travelling from Karachi to Rawalpindi and caught fire after a gas canister exploded onboard as the train was passing through the Rahim Yar Khan district of Punjab. 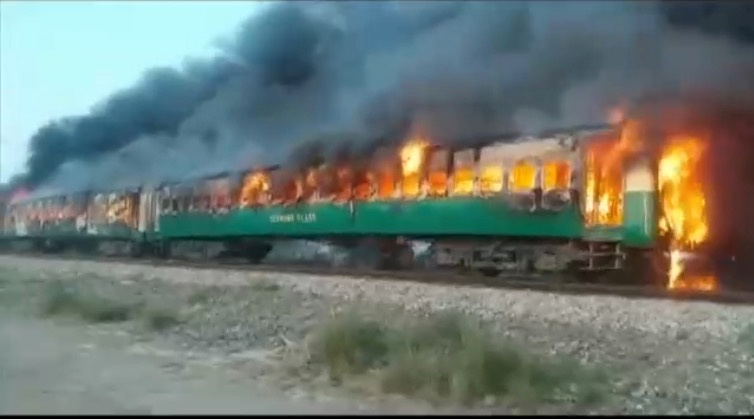 “According to information reaching us from the site of the accident, more than 65 people were killed and over 40 injured,” said provincial health minister Dr. Yasmin Rashid.

The injured were being rushed to hospitals in the nearby city of Bahawalpur and elsewhere in the district, she said, adding that only 18 of the bodies were identifiable.

The fire started after passengers started cooking on the train, and the resulting inferno destroyed three economy-class carriages of the train.

Railways Minister Sheikh Rashid confirmed that two stoves blew up. “Two stoves blew up when people were cooking breakfast, the presence of kerosene with the passengers in (the) moving train further spread the fire,” he said.

“Most deaths occurred from people jumping off the train,” the minister added. He further said people sneaking stoves on trains to prepare meals on long journeys was a common problem.

The Pakistan Army, reacting to the incident, dispatched doctors and paramedics to the site to assist the civil administration in rescue and relief activities. The military’s media wing further said Army Aviation helicopters were also dispatched from Multan to evacuate the critically injured.

Prime Minister Imran Khan said he was “deeply saddened by the terrible tragedy of the Tezgam train”.

“My condolences go to the victims’ families and prayers for the speedy recovery of the injured. I have ordered an immediate inquiry to be completed on an urgent basis,” he said via Twitter.

Deeply saddened by the terrible tragedy of the Tezgam train. My condolences go to the victims' families & prayers for the speedy recovery of the injured. I have ordered an immediate inquiry to be completed on an urgent basis.

He prayed for the departed souls and the bereaved families and wished speedy recovery to the injured.

Human Rights Minister Shireen Mazari extended “prayers and condolences” to families of the victims of the “terrible Tezgam train tragedy”.

Terrible Tezgam train tragedy with gas cylinder carried by passenger exploding. Prayers and condolences go to the victims families. A tragedy that could have been avoided but ever since I can recall while travelling by train no baggage check or restrictions enforced. Tragic.