Even though Pakistan cricket team bowed out of the 2019 World Cup for the top four slots, Pakistani Parliamentarians however defeated six other countries to lift the Inter-Parliamentary Cricket World Cup silverware on Friday. 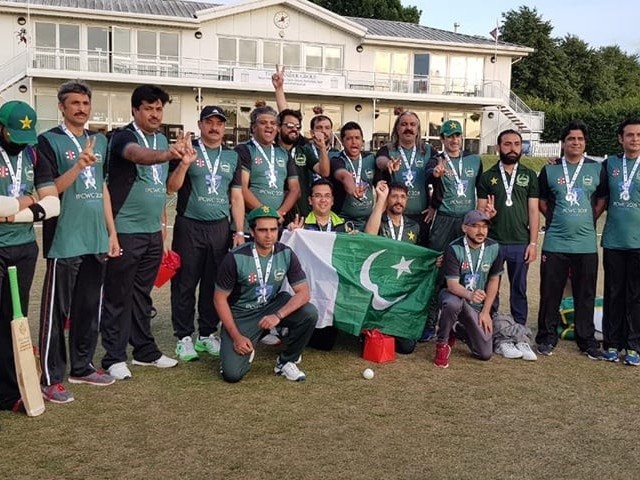 Parliamentarians from Pakistan, England, Australia, New Zealand, India, Bangladesh and Afghanis­tan participated in the four-day tournament and the final was played between Pakistan and Bangladesh.

The moment that tournament organiser @chhcalling presents the winners medal to the captain of the winning side in the #IPCWC, @TheRealPCB parliamentary side skipper @ZainHQ pic.twitter.com/Gz9Ahyy7DS

A 25-man squad, led by Makhdoom Zain Hussain Qureshi, son of Pakistan Foreign Minister Makhdoom Shah Mehmood Qureshi, represented Pakistan in the event. The match seemed to have tilted in Pakistan’s favour after they were able to dismiss Bangladesh for only 104 runs for the loss of eight wickets.

Pakistani lawmakers, unlike the national team which was unable to qualify for the ICC World Cup semi-finals recently, were quite comfortable while chasing the target. The 104-run target was achieved by Pakistan with nine wickets intact and as many as eight overs to spare, courtesy Federal Minister for Kashmir affairs and Gilgit-Baltistan Ali Amin Khan Gandapur’s 52-run unbeaten innings.

The squad which lifted the trophy also came under fire for using taxpayers’ money to travel and participate in the tournament, but the National Assembly Secretariat issued a statement to say that the expenses would be borne by the team members and the managerial staff.

And that’s it folks! A pulled four through the leg side and it’s all over. The parliamentary side of @TheRealPCB romp home, winning by nine wickets with eight overs to spare #IPCWC pic.twitter.com/2o3flxbl7n

“This decision has been taken keeping in view the ongoing austerity measures adopted by parliament and other government departments in order to lessen the burden on public exchequer,” the statement had said.

The squad was finalised by the Pakistan Cricket Board after an on-the-field assessment of players where they were pitted against cricket clubs and departmental teams in Islamabad and Rawalpindi.