According to US Department of Defense’s 2020 report on China’s Military, “The PLAAF is preparing upgrades for the J-20, which may include increasing the number of air-to-air missiles the fighter can carry in its low-observable configuration, installing thrust-vectoring engine nozzles, and adding supercruise capability by installing higher-thrust indigenous WS15 engines,”

The communist state takes pride in the “20”-series aircraft as they are indigenously built and unique in their class.

The stealth fighter jet which took its maiden flight on January 11, 2011, celebrated its 10th anniversary recently. Even its first flight was shrouded in mystery as then-US Secretary of Defence Robert Gates, who was on an official to visit to China at the time, was unaware of the development.

This was revealed in a US intelligence report later, which admitted that Washington had underestimated China’s ability to develop a new-generation fighter.

The J-20, a single-seat, multirole stealth fighter aircraft, is manufactured by Chengdu Aircraft Industry Group. China chose not to participate in the joint development of fifth-generation aircraft by Russia as it would have resulted in Moscow earning more profits.

Chengdu Aircraft then started the development of the J-20 in the late 1990s under the J-XX program.

The 20.8m-long J-20 aircraft is intended as an air superiority fighter able to compete with the American-built F-22 or F-35 stealth jets. The J-20 has achieved a credible combat capability, maturing over its ten-year lifespan. The South China Morning Post reported that an updated J-20B was unveiled last year, with a major upgrade being the inclusion of thrust vector control to improves the aircraft’s agility.

The aircraft can be deployed in the transportation of personnel and heavy equipment during combat, humanitarian assistance and peacekeeping missions. It can also be used in airborne early warning and control (AEW&C), anti-submarine warfare (ASW), and aerial refueling roles.

Military experts have claimed that compared with the Russian D-30 engine currently used on the Y-20, the Chinese engine is much larger in diameter and can provide more powerful thrust, uses less fuel, and enables the plane to take off and land in shorter runways.

Prakash Nanda, strategic analyst and consulting Editor of The EurAsian Times, wrote that China’s development of a new aerial refueler, known as the Y-20-U, would significantly boost the PLA Air Force’s capability to carry out long-range raids.

This could have ominous implications not only for India but also for the whole of the Indo-Pacific.

The Z-20 is the country’s first indigenously developed medium-lift helicopter. It is widely believed to have been designed on the basis of the US Sikorsky S-70 Black Hawk. The Z-20 helicopter is identical to the Black Hawk in terms of shape, size, and layout.

Manufactured by Harbin Aircraft Industry Group, a subsidiary of China’s state-owned Aviation Industry Corporation (AVIC), the helicopter performed its maiden flight in 2013. The Z-20 made its first public appearance during China’s 70th National Day military parade in Beijing in October 2019. 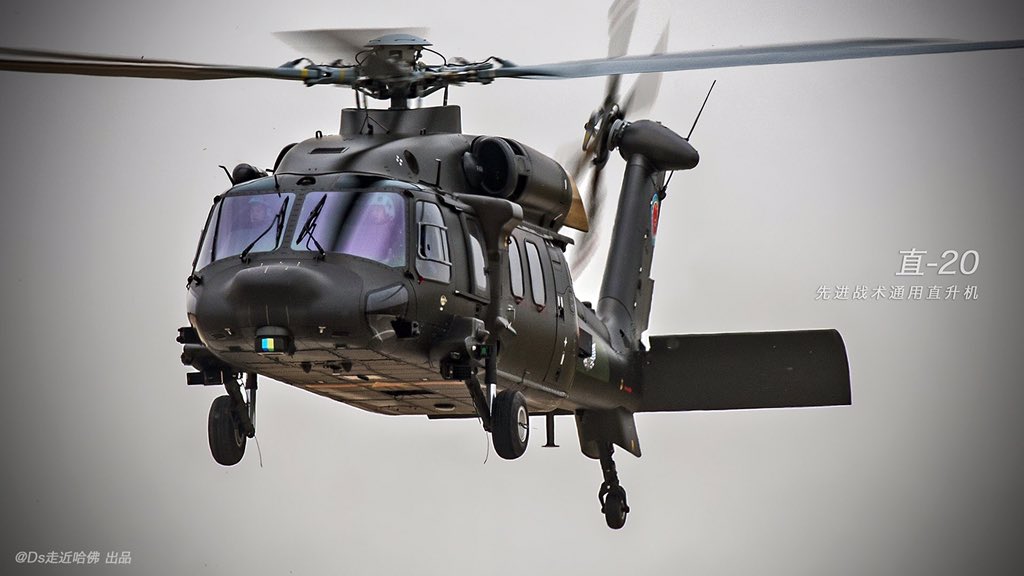 The rotorcraft also performed a static and close-formation demonstration flight at the fifth China Helicopter Exposition held in Tianjin in October 2019.

Why China’s New Refueler Y-20 Sends Ominous Signals To India & Others In The Indo-Pacific?

“J-12 and 13 are just projects and are likely to be reused for 4.5 gen planes if they are built and enter service. With J-20, they have represented a generational change in the fighter aircraft design,” Chacko told The EurAsian Times.

Some of the most advanced warplanes in the fleet of the PLA Air Force will perform at the Zhuhai Airshow 2021. Over the years, the event has become a comprehensive arms exhibition that not only features aviation products but also land and maritime weapons and equipment, besides civilian-use products.

More than 30 types of ground equipment, such as the combat tank VT4, the lightweight VT5, the 8×8 armored tank VN1, will perform a variety of tactical operations including slope climbing, water obstacles crossing, and snake-like maneuvers.