The first batch of five Dassault Rafale jets flew out of Merignac airbase in southern France’s Bordeaux today and will arrive in India via the UAE on Wednesday, July 29. The much-awaited Rafale jets will be officially inducted and join the Indian Air Force fleet in Hasimara airbase in Haryana’s Ambala.

#WATCH Rafale jets taking off from France to join the Indian Air Force fleet in Ambala in Haryana on July 29th. pic.twitter.com/6iMJQbNT9b

The five aircraft will be the first tranche of the 36 planes bought by India from France in a Rs 59,000-crore inter-governmental deal in 2016. 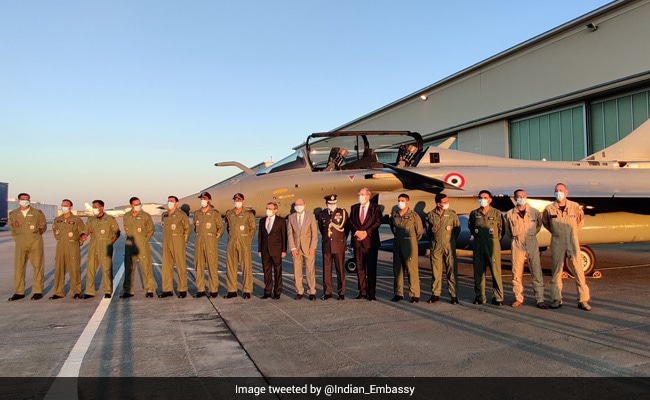 The Rafale aircraft will cover a distance of approximately 7,000 km from France to India with air-to-air refuelling and a single stop at a French airbase in the United Arab Emirates (UAE).

Bon Voyage: Indian Ambassador to #France interacts with the Indian pilots of the Rafale. Congratulates and wishes them a safe flight to India with a single hop. #ResurgentIndia #NewIndia #Rafale@IAF_MCC @MeaIndia @rajnathsingh @Dassault_OnAir @DefenceMinIndia @PMOIndia pic.twitter.com/jk3IWD9tYU

The first squadron of the jets will be stationed at Ambala air force station, considered one of the most strategically located bases of the IAF. India had signed an inter-governmental agreement with France in September 2016 for the acquisition of 36 Rafale fighter jets at a cost of around $7.5 Billion.
Previous articleRussian Navy To Deploy ‘Poseidon Nuclear Armed Drones’ To Counter US’ Threats
Next articleIndia-China Tensions: India Bans Additional 47 Chinese Apps, 250 More Under Scanner Including PUBG