The primary purpose of India’s major defense exhibition, according to reports, is to promote the country as a potential manufacturing hub and to attract investors.

At the DefExpo 2022 to be held in Gandhinagar, Gujarat, European group MBDA will showcase a comprehensive range of missile technology and missile systems. Additionally, at this year’s show, MBDA is set to reinforce its support for India’s initiatives toward Atmanirbhar Bharat (self-reliant India), The Financial Express reported.

Some of the technologies on show include those supplied to the Indian Navy to combat emerging threats in the Indian Ocean Region, as well as technologies for the Army and the Air Force (IAF). 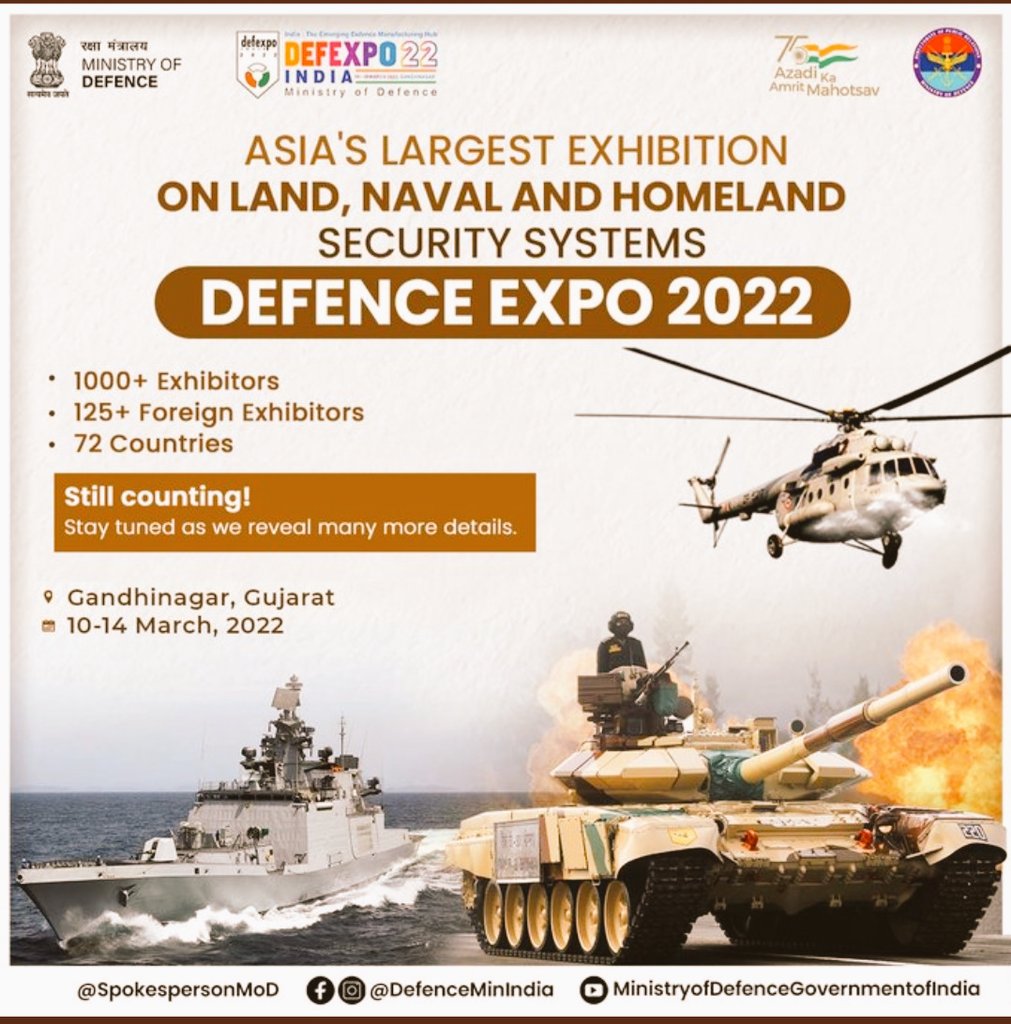 More than 900 defense companies and 55 countries reportedly confirmed their participation in Def Expo 2022, Asia’s largest defense show, which will be held later this month. The total number of participants is expected to cross the 1000 mark.

Apart from MBDA, US aerospace and defense major Lockheed Martin will display a varied portfolio of missiles, aeronautics, rotary mission systems, and much more, including C-130J Hercules, MH-60 Choppers, and F-21 fighter jet (which is being pitched to India), to mention a few.

BAE Systems, a worldwide defense, aerospace, and security corporation, will showcase its local industry ties and efforts to assist India’s focus on indigenous defense production. It plans to unveil its PHASA system in India, which is a Solar-electric High Altitude Long Endurance (HALE) drone and exhibit weaponry like as M777 ULH Howitzer guns and APKWS laser-guided rockets, among other things.

The Indian Defense Ministry announced recently that the exhibition will also feature an event dubbed Invest4iDEX, in which startups will be able to present their ideas to investors and venture capitalists.

A flagship scheme of the Modi government, ‘Atmanirbhar Bharat’ got a fresh impetus last year with the MOD issuing a “negative import list” in order to reduce dependence on foreign weapons.

The Defense Expo comes at a time when India remains embroiled in a protracted border conflict with China which has prompted its military to make emergency procurements from foreign partners in the last two years.

What Will MBDA Showcase

At Defexpo 2022, MBDA aims to show a full-scale Meteor missile, MBDA’s beyond visual range ramjet-powered and network-enabled air-to-air weapon. The IAF has already received this missile. The full-scale Meteor will be on display during the show for visitors to view.

“Key to Meteor’s performance is its throttle-able ramjet engine, active radar seeker an­­d datalink”, according to MBDA. The Meteor has a much larger “no-escape zone” (the arc in which the target aircraft cannot flee the missile) than any of its competitors due to its capacity to fly faster, for longer, and with sharper maneuvers than other air-to-air missiles.

The second missile is the MICA air-to-air missile which is also carried by the IAF’s Rafales. It is also being integrated into the IAF’s fleet of Mirage 2000 fighter planes as part of an ongoing upgrading effort.

The MICA, according to MBDA, is the first air-to-air missile in the world with two interoperable seekers: active radar and imaging infrared. As a result, the MICA may be utilized in both close-quarters fighter-to-fighter dogfights and the BVR role.

When fired in BVR mode, the MICA flies much of the distance to the opposing aircraft in passive mode — that is, without emitting radar emissions that might warn the opponent. Only in the closing stages of its approach does the seeker begin to radiate, giving the enemy aircraft no opportunity to make evasive maneuvers or install effective countermeasures.

A third important missile display is the ASRAAM missile. The IAF’s updated Jaguar fleet, as well as the Hawk advanced jet trainer, will be armed with the Advanced Short Range Air-to-Air Missile (ASRAAM), which MBDA says “is being delivered to the IAF as its New Generation Close Combat Missile program.” It’s also a part of the Swedish Gripen E’s arsenal of weapons.

The fourth significant missile to be on display is the SCALP missile. IAF Rafales are equipped with the French SCALP deep-strike cruise missile to attack ground targets.

This stealthy “bunker buster” weapon can strike hardened and shielded targets deep inside enemy territory from a safe distance, avoiding the need for the Rafale to enter hostile airspace.

Due to its powerful tandem warhead and many explosion modes, the SCALP has the potential to cause havoc at the target end.

The Mistral man-portable air-defense system (MANPADS) will also be on show at Defexpo 2022, according to MBDA, which has “performed remarkably well in fire evaluation trials for India”.

The Mistral has already been chosen and integrated into India’s indigenous armed helicopters, such as the Rudra and Light Combat Helicopters (LCH). In Gandhinagar, three versions of the Mistral will be on display: a helicopter-launched version, a very short-range air defense manpack version, and a navy cruiser version.

Another missile to be displayed by MBDA is the Exocet missile. Seen as one of the world’s most potent anti-ship missiles, Exocet will be integrated into the Indian Navy’s SM39 Scorpene-class submarines (Project 75). Maritime Patrol Aircraft, strike fighters like the Rafale, and medium to heavyweight helicopters may all launch the AM39 variant.

Both the Exocet SM39 and AM39, as well as the Exocet MM40, which has been offered to the Indian Navy as a Medium Range Anti-Ship Missile, will be on display.

For the navy’s Short-Range Surface to Air Missile (SRSAM) requirement, the company is looking to deliver alternatives such as Sea Ceptor, the most recent generation of the naval air defense system. This ensures comprehensive defense against all known and potential air targets. This also involves simultaneous 360° saturation strikes.

The CAMM missile, which has a next-generation all-weather fully active RF-seeker, two-way data-link, and soft-vertical launch system, is used by the Sea Ceptor.

Anti-tank weapons of the future battlefield will be demonstrated as well. According to the company, it has a long history of working together on anti-tank guided missiles with India, with more than 50,000 ATGMs produced to date.