Rampant US vs Adamant Iran – Can The US Bring Iran To Negotiating Table On Its Terms? 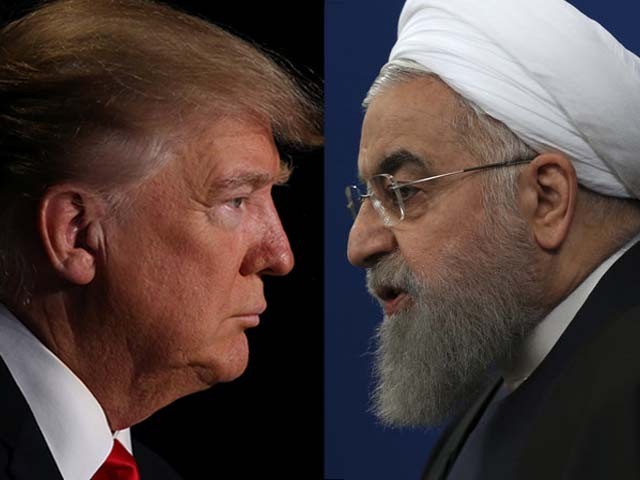 The US-Iran rivalry has been going since the 1979 Islamic Revolution of Iran where so-called US puppets were removed from power. The US is by far the strongest and most powerful country on the planet and Iran is as determined as ever, with subtle support from Russia and China. Iran has proven its mettle in Syria by not allowing Bashar-al-Assad government to topple despite direct intervention from the West and the Arab world. What lies ahead for Iran?

US at Odds with UK, France over Iranian Threat in the Middle East

From the very end of World War II, the US has tried to dominate the world’s political discourse and has dictated policies to every country it could get its hands on. From North Korea to Venezuela, the diktat has been the same – either accept our political supremacy or bear the consequences of not listening to us. Pax Americana is the international world order. Anything else is just hearsay or wild predictions about the future. China is still decades away from stripping the United States of its title as the ‘Imperial Overlord’.

It is perhaps a forgotten area of history, but Iran was chummy with the US until the 1979 Iranian revolution. Iran was a founding member of the Central Treaty Organisation (CENTO) and, in the Middle East, there was no other country which enjoyed greater political and military relations with the US than Iran. The Shah even wanted Iran to be perceived as being a part of Europe.

All of this went downhill after the revolution when Ayatollah Khomeini started calling the US the “Great Satan”. Some say that relations took an immediate nosedive because the hedonistic and capitalist US was an anathema to the post-revolution Islamic Iran. But this is hard to understand. If this was the case, then why didn’t Iran bear such enmity with other highly un-Islamic nations or all other non-Muslim countries?

The Iranian revolution did not start out as an Islamic revolution. Rather, it was an anti-Shah revolt, made up of a motley crew of leftists, liberals and Muslim clerics. After the revolution, the looming symbol of the Shah was Iran’s relationship with America. Even the Iran hostage crisis was retaliation by Iranian students against the US for hosting the ailing Shah in their country. Thus, when Iran vehemently opposes the US at all international forums, it is not really going against the US. Rather, it is fighting its own secular past.

Here in the real world, the US has over 70 years of unprovoked aggression against Iran:
-Overthrowing Iran's elected gov in 1953 for oil companies
-Propping up the shah's murderous monarchy
-Supporting Saddam Hussein's bloody war on Iran
-Proxy wars
-Illegal, crippling sanctions

Since the Shah’s exile, US-Iran relations have never been the same. Modern day Iran sees itself as a lone wolf fighting against the rest of the herd. The rest of the world sees it as a pariah too. Lone wolves, people who have intentionally or unintentionally distanced themselves from everyone else, take on dangerous weapons as a means of both physical and psychological defence. In the arena of world politics, nuclear armaments are the weapons of choice. The best tactic to deal with lone wolves is to pacify them and to accept them, because shunning them only exacerbates their pain and makes them take drastic steps.

That’s exactly what former president Barack Obama did. His 2015 nuclear deal recognised that by accepting Iran in the fold of nations, Iran would let go of its nuclear ambitions. More importantly, the nuclear deal meant that economic sanctions were lifted on Iran and it could freely export oil and gas. Thus, Iran considered giving up uranium enrichment in lieu of economic security a fair bargain.

Donald Trump, however, does not want to be a ‘therapist’ like Obama. He is a playground bully. Whoever opposes him in the slightest is to be dealt with harshly, slammed to the ground and pummeled mercilessly. This is exactly what he would have done with Iran had it not been for America’s recent history in Iraq and Afghanistan. The American public does not want any more wars. The alternative is economic warfare. The recent round of sanctions which the US has imposed on Iran are some of the harshest we have ever seen in the modern era.

Trump’s unilateral withdrawal from the nuclear deal, along with America’s stringent economic sanctions on Iran leave it with no incentive to cosy up to the US. And Trump has only dialled up the rhetoric. It is no secret that he is being riled up by his hawkish advisors on Iran. John Bolton, the current national security advisor, was the under-secretary of state during George W Bush’s first tenure. Elliot Abrams, who is now Trump’s special representative for Venezuela, was the key instigator of the Iraq war during Bush’s reign.

The tragedy is that Trump does not have a cohesive foreign policy on Iran. In Trump, the neo-conservatives see an easy target that they can use to implement their global order because he doesn’t have a foreign policy of his own. He was initially led to believe by the Israeli premier, Benjamin Netanyahu, and by the neo-conservatives within his administration, that Iran was an easy target. He was told that all he needed to do was increase the pressure on the Iranians and they would back off. When this did not happen, and Iran, in fact, started giving signals of preparing it’s army, Trump got a little miffed and realised that a larger war was not in his interest. So now, all he can do is make empty threats on Twitter.

….Iran will call us if and when they are ever ready. In the meantime, their economy continues to collapse – very sad for the Iranian people!

Last week must have been crazy for the Trump administration because, initially, intelligence was leaked that Iranian boats were shipping missiles, then the same intelligence was disputed. The use of warplanes was debated, America threatened a full-scale conflict and then backed off from the idea. All this, just in the span of one week.

Now it seems that Trump is back at it after the weekend, tweeting that if Iran decides to take on the US, it will cease to exist.

The truth is that Trump will not intentionally go to war with Iran and neither does Iran want a war with the US. It is throwing a tantrum over the nuclear deal because it is being strangled economically. But wars don’t happen intentionally. If both sides are militarily ready, a small incident is all it takes to lead to all-out war. The assassination of Archduke Franz Ferdinand sparked World War I; the sinking of the USS Maine contributed to the outbreak of the Spanish-American war in 1898. Similarly, the attack on the Saudi Arabian oil tankers in the UAE might be someone’s nefarious ploy to ignite the flames of yet another war in the Middle East.

De-escalation is the need of the hour, something which Trump is clearly not famous for. European powers ought to pressure the US to stick to its side of the bargain, as agreed upon in the 2015 nuclear deal. Trump, I know, is no fan of European leaders but perhaps the affable French President Emmanuel Macron can try his hand at intermediary diplomacy since Trump seems to have taken a liking to him.

Iran has no official relations with the US but maintains its presence in Washington through a Special Interest Section in the Pakistani embassy. Pakistan, too, should try to help in the reconciliation process between the US and Iran because tensions in the region don’t bode well for Pakistan either. The alternative is a perilous step up on the ladder towards war because both Bolton and Mike Pompeo are wrong. Iran will not buckle like the Soviet Union did in 1991. It will only grow more belligerent and, dare I say, resilient.