Russian President Vladimir Putin has assured the security of Saudi Arabia if Riyadh would purchase advanced Russian weapons. Russia already has sold S-300Missiles to Iran and S-400 Missiles to Turkey and is hoping to sell advanced weaponry to Saudi Arabia as well.

“We are ready to provide security to Saudi Arabia but the political leadership the country just needs to make a wise decision, as it was done by Iranian officials when they purchased S-300, and as it was done by President [of Turkey Recep Tayyip] Erdogan with the purchase of S-400 from Russia. They will reliably protect all infrastructure objects of Saudi Arabia,” Putin emphasised.

He also noted that during the Ankara Talks with Turkish and Iranian leaders, they did not discuss the attack on Saudi oil refineries.

The Russian leader clarified Russia’s position on the crisis in Yemen. “Firstly, there is a very serious humanitarian catastrophe in Yemen. We are ready to help people, and we call on anyone who is able to do that to follow our example,” Putin noted.

“Secondly, we think that the best way to resolve this crisis is to reach agreements between all sides involved in the conflict,” he continued.

The facilities of the Saudi Aramco (oil company) in the east of Saudi Arabia were attacked by a series of drone attacks on Saturday. Yemeni Houthi rebels from the Ansar Allah movement claimed responsibility for the incident.

In particular, the world’s biggest oil refinery near the city of Abqaiq and a refinery near Khurais, where Saudi’s second-largest oil field is located, came under attack.

US Secretary of State Mike Pompeo accused Iran of involvement in the attacks, claiming that “there is no evidence the attacks came from Yemen.” The Iranian Foreign Ministry dismissed Pompeo’s accusations as baseless. 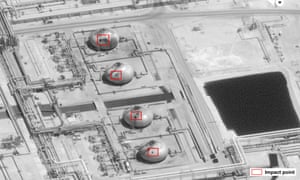 Donald Trump has said the US is “locked and loaded” and ready to respond to attacks on a petroleum processing facility in Saudi Arabia, as US officials said the evidence pointed to Iranian involvement.

The US president did not mention Iran but Tweeted that he had “reason to believe that we know the culprit” behind the series of attacks on the Abqaiq facility, which is the world’s largest petroleum processing plant. The attacks disrupted more than half of the kingdom’s oil output and will affect global supplies.

Trump tweeted: “[We] are locked and loaded depending on verification, but are waiting to hear from the Kingdom [of Saudi Arabia] as to who they believe was the cause of this attack and under what terms we would proceed!”

Iranian officials have also warned that US military assets in the region are within range of its missiles. “Having failed at ‘max pressure’, [Pompeo is] turning to ‘max deceit’,” the Iranian foreign minister, Javad Zarif, wrote on Twitter.

Previous article
RAW Agents Sneaked Into Pakistan From Iran And Escaped To Afghanistan – Islamabad Claims
Next article
Donald Trump To Meet Both Modi, Imran Khan Within Span Of Few Days