The Russian military has reportedly shot down nine Turkish Bayraktar TB-2 drones that were flying near its Gyumri military base in Armenia.

Deployed by Azerbaijan against Armenian military targets in Nagorno-Karabakh, the Turkish drones were near the airspace of the Russian military airbase.

According to a Russian news agency Avia.pro, the Russians used their latest electronic warfare weapon, the Krasukha-4 system, to deactivate the control system of the Turkish drones, bringing them down. EurAsian Times has not been able to independently verify these claim.

The Russians reportedly used the highly advanced Krasukha-4 for the first time in Syria early this year against hostile drones launched by terrorists at its Hmeymim airbase in Syria.

The electronic warfare systems stopped a cluster of unmanned aerial vehicles (UAV) launched from the militant-controlled territory of the Idlib de-escalation zone, taking over the control of the UAVs and deactivating their control systems.

Krasukha-4 is believed to be designed to counter the radars of attack, reconnaissance and unmanned aircraft, with its truck-mounted radio emitter capable of jamming radar signals, but also control channels for drones, making planes and UAVs “blind and deaf.”

The battle-field success of this EW system has even worried the US, which believes the system in Syria became “the most aggressive E.W. environment on the planet, knocking the US communications down, disabling their EC-130s, etc. 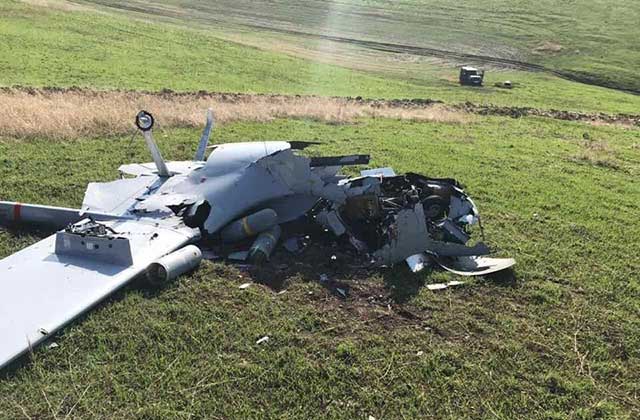 Russia shot down 9 Bayraktar drones near its Gyumri military base, Armenia

Iran had also warned the fighting sides in Nagorno-Karabakh against violating the Islamic countries airspace, which the country said will be retaliated appropriately.

According to reports, since the commencement of hostilities in Nagorno-Karabakh, Russian electronic warfare systems have been brought into full combat readiness.

As the photographs of the downed Turkish drones show, the drones were indeed removed from an electronic warfare system, and no trace of a missile strike can be seen on the fuselage. The drone warfare could be severely limited if Russia continues its e-war games in the region, as Turkey has already lost a large number of its drones in Syria.