With the Ukraine war entering its third month, Russia has now unleashed shells that spew razor-sharp, inch-long projectiles, known as flechettes (French for “little arrows”). These explosives were widely used during World War I by Allied Forces to attack enemy soldiers.

According to a CNN report, the small nail-shaped projectiles can be seen dispersed across gardens and firmly lodged in the walls of houses in the city of Irpin.

“You can’t take them out with your hands, you need pliers,” Klimashevsky, a local Ukrainian resident, told CNN, pointing to dart shells attached to the wall.

Following the Russian soldiers’ withdrawal from the towns and villages north of Kyiv that they had captured in March, evidence emerged indicating they had used these munitions during their assault, the report claimed.

Irpin, a Kyiv suburb, apparently isn’t the only site where that evidence has surfaced. It was previously reported that the darts were discovered in the bodies of those killed in the Kyiv suburb of Bucha. However, it was assumed to be an isolated incident at the time.

Weapons experts who examined images of metal arrows found in the victims from Bucha established that they were fléchettes. Russian artillery supposedly fired fléchette rounds a few days before they departed from the area at the end of March.

Tank or field gun shells commonly contain these tiny metal arrows. 8,000 flechettes can be stored in each shell. After being discharged, shells go off when a timed fuse detonates and explodes above the ground.

Flechettes are 3-4 cm in length and capable of penetrating headgear. They are released from the shell when it explodes in the air and disperses in a 300 m wide and 100 m long arch.

After placing the 500 flechettes in their box, the operator merely had to pull a chain to activate this fatal weapon. A single box of flechettes, according to reports, may cover 500 square yards.

The dart can lose its stiffness and bends into a hook when it collides with a victim’s body, while the arrow’s back, which is made up of four fins, usually breaks away, producing a second wound. This weapon is also described as an aerial dart or arrow; however, it is nothing like either of those weapons; it is not as feeble as an arrow and far more potent than a dart. 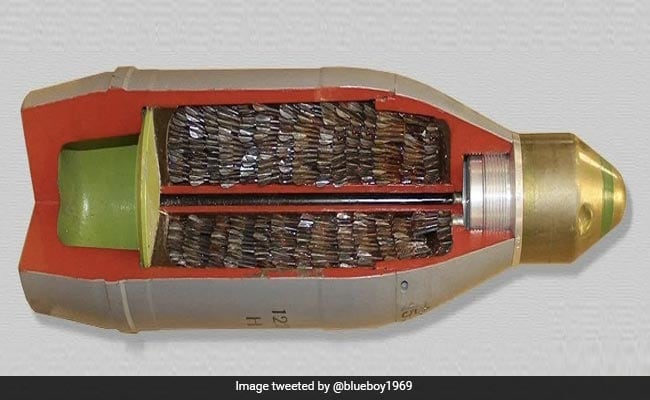 Although the use of munitions is not banned by international law, human rights organizations have long advocated for their prohibition. Nonetheless, the use of inaccurate lethal weapons in densely populated civilian areas is illegal under humanitarian law.

History Of The Flechette

Since World War I, flechettes have been utilized as ballistic weapons. The fatal metal darts could pierce helmets and be dropped by then-novel warplanes to strike infantry.

They were not frequently used during World War II, but they reappeared during the Vietnam War when the US deployed a variant of fléchette payload packed into plastic cups.

In the 1950s, the United States adopted a new, more lethal shape known as Lazy Dog. A 225kg bomb exploded to release over 10,000 projectiles, each 44mm long.

They appeared to have bullet-like strength and, at around 9 knocks per square meter, had a good probability of killing anyone in the proximity. Unlike the other explosives, the Lazy Dog made very little noise other than the patter of metal rain.

In Vietnam, America also used artillery-fired flechettes, which were termed “Beehive rounds” due to the darts’ ringing. They could be assembled to rapidly disintegrate after leaving the barrel of a gun, transforming it into a huge shotgun.

In the early 2000s, an Israeli human-rights organization attempted but failed to ban the deployment of flechettes in the occupied West Bank. In March 2008, Fadel Shana, a Reuters journalist, was gunned dead by fléchettes allegedly launched by an Israeli military system.

Previous articleCreating History! 4 Supersonic Jets Zoom Together In Diamond Formation In A Mesmerizing Event From The Past
Next articleWorld’s Biggest Naval Power – How US Navy Brought China To Its Knees As It Looked To ‘Annex’ Taiwan