Russian Navy’s most lethal warship, Admiral Nakhimov, is going through a massive modernization program that would include the latest weapons including air defense missiles & anti-submarine armament.

The nuclear power warship was built towards the end of the Cold War which will now make a comeback after almost 20 years.

Russian Deputy Defense Minister Alexei Krivoruchko had earlier told reporters that Admiral Nakhimov heavy nuclear cruiser of Project 1144 (Kirov-class battlecruiser) will return to the Navy after an overhaul and modernization in 2022.

“It will be the most powerful Navy warship. We inspected the project, the ship is now about 50% ready,” he added. According to Krivoruchko, the defense ministry allocated 29.5 billion rubles for the project in 2019. 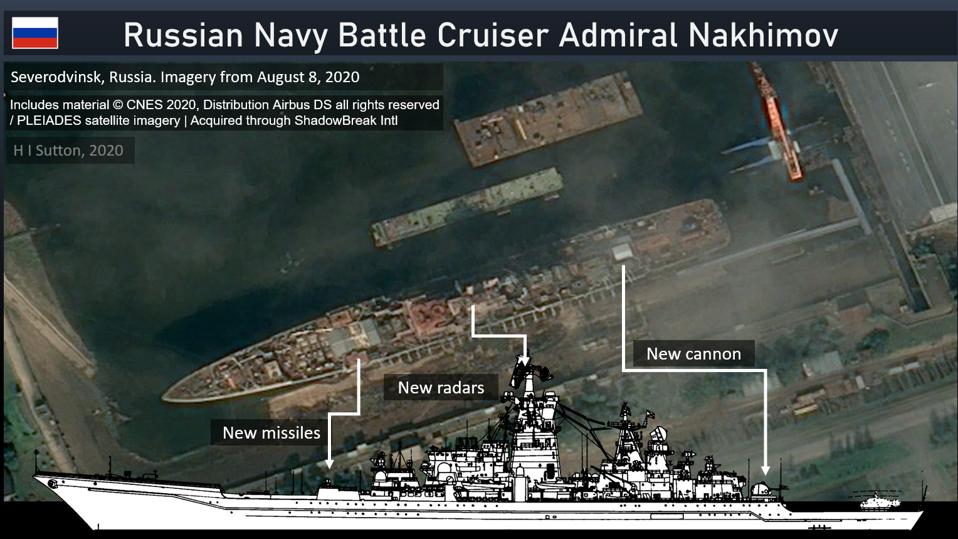 Russian state media has reported that the warship will be armed with 3 M22 Zircon hypersonic anti-ship missiles. Speaking in St Petersburg at an annual naval parade that showcases Russia’s best ships, Russian President Vladimir Putin said that the Russian Navy would be armed with hypersonic nuclear strike weapons and underwater nuclear drones.

“The widespread deployment of advanced digital technologies that have no equals in the world, including hypersonic strike systems and underwater drones, will give the fleet unique advantages and increased combat capabilities,” he said.

China Demonstrates Capability To Use Its Commercial Ships For Military Purposes

Then there were no less than six Kashtan close-in weapons systems (CIWS). Each has two 30mm Gatling guns and eight 9M311 short-range missiles, plus 24 reloads for a total of 192 missiles.

Out of the four built only two are in service due to its size and complexity which is considerably expensive to maintain. The second one is called Peter the Great (’Pyotr Velikiy’) deployed with the Russian Navy’s arctic-based Northern Fleet. It is a newer version with modern armaments.

According to H I Sutton writing for the Forbes, Zircon is much smaller than the original P-700 Granite missiles so possibly more will be carried. “Also carried by the Oscar-II class submarine, three Zircon could be carried for each Granite, so a total of 60 missiles.”

He also suspects the Kalibr land-attack cruise missile or Oniks dual-purpose anti-ship and land-attack missile might also be used to arm the warship since they are sometimes loaded interchangeably with Zircon.

According to state media reports, the ship will be protected by the Fort-M, a more advanced version of the S-300 but still an older version in comparison to S-350 and S-400 systems.

Pantsir-M air defense systems as well as the Paket-NK anti-submarine weapons will also be used. Sutton compared the warship with the US Navy’s Iowa Class battleships saying that the Russian warship is as large as the American one but it is ” considerably more modern in armament and thinking.

With the latest weapons and sensors, it will arguably be the most powerful surface combatant in the world.” “Recent satellite imagery shows that she is still a construction site though. So she may need several years alongside in Severodvinsk after launch before the modernization is complete,” concluded Sutton.