Attacks on tankers plying the Strait of Hormuz, through which 20% of the world’s oil tankers pass, have been attributed by the Trump administration to Iranian naval units, which is ratcheting up its already bellicose rhetoric against Tehran as the Pentagon increases its military presence around Iran. 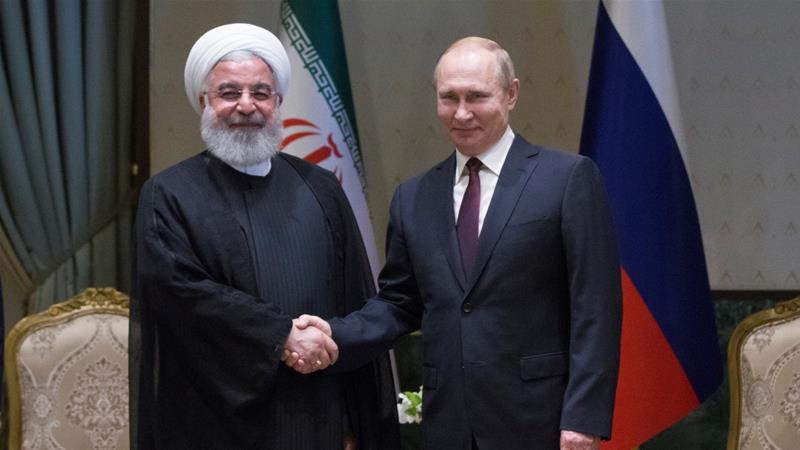 In seeking potential allies to forestall possible Western naval assaults, Iran is looking for solidarity from another country under heavy sanctions from the West: Russia.

Iranian Navy Commander Rear-Admiral Hossein Khanzadi, who was in St. Petersburg July 29 for Russia’s Navy Day commemorations, noted that Russia and Iran had signed a naval cooperation agreement and that the two countries’ navies would have joint manoeuvres in the Arabian Gulf, a significant development given rising tensions there.

This would not be the first bilateral naval cooperation between Iran and Russia. Beginning in 2015 Iran and Russia have had joint naval drills in the Caspian. The Caspian, however, is an inland sea shared by Azerbaijan, Iran, Kazakhstan, Russia and Turkmenistan and is covered by a joint agreement between them prohibiting the presence of foreign military forces there.

In contrast, the Strait of Hormuz, connecting the Arabian Gulf to the Arabian Sea and the Indian Ocean, is an international waterway recognised under maritime law as open to ships from all nations.

In seeking to gather a naval coalition to deploy there, ostensibly to protect merchant shipping, the US government is “flying the flag” to increase diplomatic pressure on Iran and to isolate it. The Trump administration is pressuring allies, including Germany, France, Belgium, Norway, Japan, South Korea and Australia, to contribute maritime forces to this coalition. The British government has announced that it was formally joining the US Operation Sentinel maritime mission to protect commercial shipping in the Gulf.

Upping the ante, Israel said it would join what the United States calls an effort to boost security of navigation in the Gulf, leading Iran’s Foreign Ministry spokesman Abbas Mousavi to say that Iran considers the possible Israeli presence in the US-led coalition in the Gulf as a “clear threat to its national security and reserves the right to counter it.”

Two days later, on August 11, Islamic Revolutionary Guard Corps Navy Commander Rear-Admiral Alireza Tangsiri stated that the United States and Britain bore responsibility for an Israeli presence in raising tensions in the Arabian Gulf, warning: “Any kind of presence of the Zionist regime in the Arabian Gulf is illegal as it may trigger war and conflict in the region.”

Adding another level of complexity to this rapidly evolving situation, unconfirmed reports state that Russia, under the terms of its bilateral agreement, intends to use Iran’s Bandar-e-Bushehr and Chabahar ports as forward military bases for warships and nuclear submarines, to be guarded by hundreds of special forces “military advisers.”

As maritime tensions intensify between Iran, the United States and Great Britain, the presence of Russian maritime forces there would constitute a significant check on potential offensive Western naval operations, providing Iran with a significant naval ally.

While in the past the Russian Navy has sent warships to the Indian Ocean to participate in anti-piracy operations off Somalia, this planned deployment represents a significant development in one of the most volatile maritime zones because it could provide a counterweight to the US Navy’s 5th Fleet, homeported in Bahrain.

It is an open secret in Washington that many Trump administration officials, led by national security adviser John Bolton, are actively promoting regime change in Iran, while Russian President Vladimir Putin has steadfastly maintained his opposition to such Washington-inspired colour revolutions.

Given US President Donald Trump’s closeness to the Russian president, it remains unclear whose advice Trump will consider most closely when shaping his administration’s policies in one of the most volatile regions in the world.

Regarding the July 29 agreement, Khanzadi said: “This is a turning point in the relations of Tehran and Moscow in the field of defence.”

While Washington could counter the rising Iranian-Russian rapprochement by softening US policy towards Iran, returning to the 2015 Joint Comprehensive Plan of Action nuclear agreement, easing and eventually lifting sanctions and fostering Arab-Iranian reconciliation across the Gulf, reducing tensions and thereby limiting Russia’s ability to expand its regional presence, such a moderate policy shift seems unlikely given the ascendancy of foreign policy hardliners in the Trump administration.

In the interim, as Washington prevaricates, support for Iran’s position grows. On August 14, Iraq’s Alsumaria News reported that the Iraqi government was drafting a proposal for neighbouring Arab countries to secure navigation in the Gulf and prevent the entry of outside military forces.

John C.K. Daly is a Washington-based specialist on Russian and post-Soviet affairs. Originally Published By The Arab Weekly