With so much spotlight on Russia’s newest fighter jet, Checkmate, it appears that the aircraft maker is going to great lengths to make it a distinct brand.

The state defense conglomerate Rostec has designed a limited-edition perfume called ‘Checkmate’, especially for the Dubai Air Show 2021, the largest one to be held since the Covid-19 pandemic broke out early last year.

Su-75 Checkmate Vs Su-57 Felow – How Does Russia’s New, Single-Engine Stealth Aircraft Differ From Its Predecessor?

A TASS correspondent tried the perfume named after the Russian single-engine fighter, which was presented abroad for the first time at the exhibition. The Guild of Perfumers of Russia has made this unisex perfume on behalf of Rostec.

The Checkmate was released in limited quantities specifically for Dubai Airshow 2021, according to TASS. Visitors and guests of the exhibition can get acquainted with the scent in The Checkmate pavilion, Rostec was quoted as saying by TASS.

However, the perfume is not for sale. Only representatives of Russian and foreign delegations attending the presentation of the light tactical fighter may avail it.

A video released by Rostec shows a black box with the emblems of the state corporation ‘Rostec’ and the company ‘Sukhoi’, as well as images of the aircraft, when opened, disintegrates into a black-and-white chessboard. The perfume is released in 50 ml format. The lid of the bottle is decorated with the figure of a black chess horse.

The Checkmate debuted at the MAKS 2021 air show in July this year.

Checkmate perfume symbolizes the aircraft’s reliability and novelty, as well as its readiness to operate in any condition: under the scorching desert sun, in subtropical and mountainous terrain, as well as in the Extreme North and in the tropics, attesting to the plane’s high export potential and constructive adaptability, Rostec said in a release.

The perfume notes combine the scents of glass, genuine leather, and metals used in the construction of the fuselage, engines, and aircraft cockpit, as well as light shades of juniper, patchouli, and oakmoss.

The project is made to accompany the foreign debut of the fighter, which will happen tomorrow in Dubai.

The video contains references to the key features and unique capabilities of the fighter. pic.twitter.com/sUrw9zh5b5

“This technogenic chord permeates everything: from the creation of the machine by Russian designers and engineers to the aircraft itself, which is just as much a living being consisting of metal structures and mechanisms. 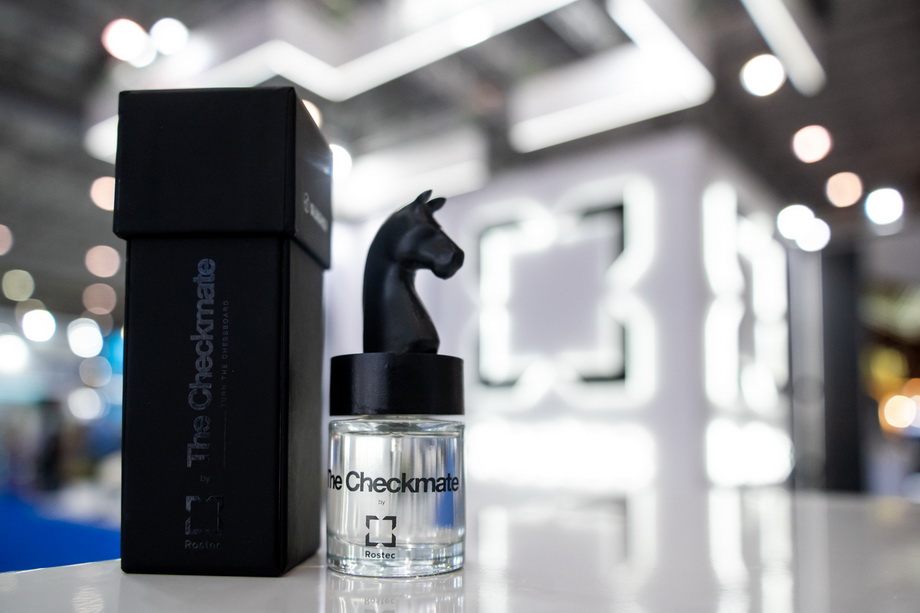 And it also breathes as it flies and feeds on the fuel!” said Oksana Chernyshova, President of the Perfumers Guild of Russia.

In July, Checkmate was unveiled at the MAKS-2021 international air show in the Moscow region, where it was presented as a functional model. This Su-75 Checkmate is Russia’s second fifth-generation stealth fighter jet that will be assembled at an aircraft plant in Russia’s Komsomolsk-on-Amur.

Missiles would be located in internal weapons bays like the Su-57, with external points also available since it is not a pure stealth aircraft. UAC chief Yuri Slyusar earlier said the fighter plane has modular modification potential and could be transformed into a twin-seat role.

“Checkmate sparked great interest abroad, and the UAE is an excellent platform for presenting the aircraft to a wide range of potential partners. It is planned to hold a number of closed presentations for delegations participating in the salon, as well as an open presentation for visitors and media representatives,” a source in the Russian aircraft industry told reporters in the run-up to the Dubai Air Show.

As reported by The EurAsian Times, the CheckMate is expected to undergo comprehensive trials with the first flight expected to be in 2023 and serial production in 2026. However, likely obstacles include the under development Izdeliye 30 engines, that are yet to enter serial production.

If engine issues do not get solved, Russia could continue using AL-31FP engines that also power China’s J-20 stealth jets. The fact that the plane has a complete ‘open architecture’ to allow customers to install Russian, domestic and foreign systems shows the clear export-oriented goal of the fighters.