Saudi, UAE Show Solidarity With Pakistan But No Support On Kashmir

Saudi Arabia and the UAE sent their top diplomats to Pakistan on Wednesday to help Islamabad defuse tensions with India over the Kashmir issue. Pakistan media was quick to claim that both Saudi Arabia and the UAE vehemently supported Pakistan over the Kashmir dispute with India, while the Indian media claimed that Kashmir is not a worry for ‘Muslim Ummah’ quoting the UAE officials.

Prime Minister @ImranKhanPTI welcomed and chaired a meeting with Foreign Ministers of Saudi Arabia and UAE to discuss issue of Kashmir after Prime Minister successfully led efforts of raising voice for Kashmiris internationally and exposing the fascist and racist side of Modi ! pic.twitter.com/6Gm8ChxFIV 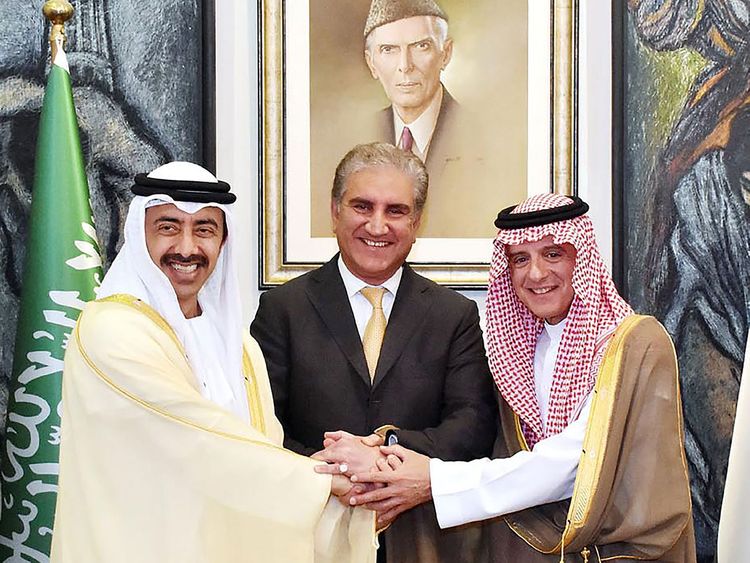 A statement released after the meetings said Saudi Arabia and the UAE “would remain engaged to help address the current challenges, defuse tensions, and promote an environment of peace and security.”

According to  ANI and News International, the UAE Foreign Minister Sheikh Abdullah bin Zayed bin Sultan Al Nahyan has said that Kashmir is not an issue concerning Muslim Ummah (community) but rather a dispute between Islamabad and New Delhi.

Foreign Ministers of the United Arab Emirates (UAE) and Saudi Arabia, Adel bin Ahmed Al-Jubeir, respectively, arrived here on Wednesday to discuss the Kashmir issue that has been persistently internalised by Pakistan since India changed the constitutional status of the region.

According to the reports, some Pakistani officials sought UAE minister’s solidarity but instead, he averred that Islamabad should not make the Kashmir issue a matter regarding the Muslim community. He also urged that Pakistan and India should resolve the matter through talks between.

Pakistan has requested Saudi Arabia and UAE to take a ‘clear and unambiguous’ position on the Kashmir dispute at a time when people of Pakistan and Kashmiris expect a ‘strong support’ from the Muslim world. However, Islamabad has been utterly dejected with a muted reaction to India’s revocation of Article 370 from Jammu and Kashmir.

The UAE even conferred Indian PM Narendra Modi with its highest civilian award–Order of Zayad despite the protest by Pakistan. Uninfluenced by Pakistan’s attacks against India on multiple platforms, the UAE became the first country from among the Organisation of Islamic Cooperation (OIC) member states to support India over its decision.