In a major setback to the Balochistan Freedom Struggle, the US has declared the Balochistan Liberation Army (BLA) a terrorist organisation. This development against the BLA will help build trust between Pakistan and the US and also assist in resolving the Afghan dispute.

The BLA according to Islamabad has been behind a plethora of terrorist attacks in Pakistan, especially in the Balochistan region. Pakistan has long considered BLA as a terrorist organisation and repeatedly urged the US to follow suit. The development comes just weeks before the maiden visit of Prime Minister Imran Khan to the United States. 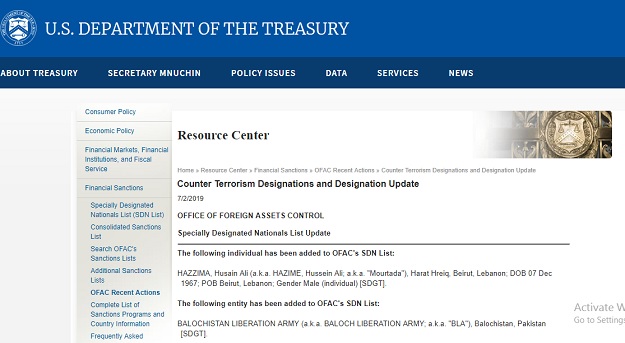 “The Department of State has designated the Balochistan Liberation Army and Hizbullah operative Husain Ali Hazzima as Specially Designated Global Terrorists (SDGTs) under Executive Order (EO) 13224,” the US State Department confirmed in a statement.

“Additionally, the Department of State has amended the terrorist designations of Jundallah to reflect the group’s new primary name Jaish al-Adl and associated aliases. These aliases have been added to the group’s designation as a Foreign Terrorist Organisation (FTO) under Section 219 of the Immigration and Nationality Act (INA), and as an SDGT under EO 13224,” it added.

The department has also reviewed and maintained the FTO designation of Jundallah.

“Today’s actions seek to deny Hazzima, BLA, and Jaish al-Adl the resources to plan and carry out terrorist attacks. All of their property and interests in property subject to US jurisdiction are blocked, and US persons are generally prohibited from engaging in any transactions with them.”

The BLA is an armed separatist group that targets security forces and civilians, mainly in ethnic Baloch areas of Pakistan. The outfit has carried out several terrorist attacks in the past year, including a suicide attack in August 2018 that targeted Chinese engineers in Balochistan, a November 2018 attack on the Chinese consulate in Karachi, and a May 2019 attack against a luxury hotel in Gwadar.

The State Department further said that Jundallah, which was designated as an FTO and SDGT in 2010, began using the new name Jaish al-Adl and associated aliases in 2012. Since its inception, the group has engaged in numerous attacks that have killed scores of Iranian civilians and government officials, including a February 2019 suicide bombing and the October 2018 kidnapping of Iranian security personnel.

Previous articleBlood Will Continue To Flow in Kashmir Until Genuine Demands Not Met: Unpatronized Analysis
Next articleDubai Ruler’s Wife Dupes and Flees To Europe; He Writes Her An Angry Poem- Reports