Former Pakistani cricketer Shahid Afridi had managed to do what millions of people from the Islamic Republic of Pakistan never dared to i.e. support the plight of Uighur Muslims who have been detained by the Chinese authorities in millions.

However, Afridi was forced to delete the tweet in which the superstar cricketer urged the Pakistani Prime Minister Imran Khan to speak up against China’s persecution of Uighur Muslims.

“Hearing of atrocities dedicated up against the #UighurMuslims is heartbreaking. We request @ImranKhanPTI to speak up against this; talk of uniting the Muslim ummah includes our brothers & sisters in China also,” he had written in a Twitter post on Sunday. 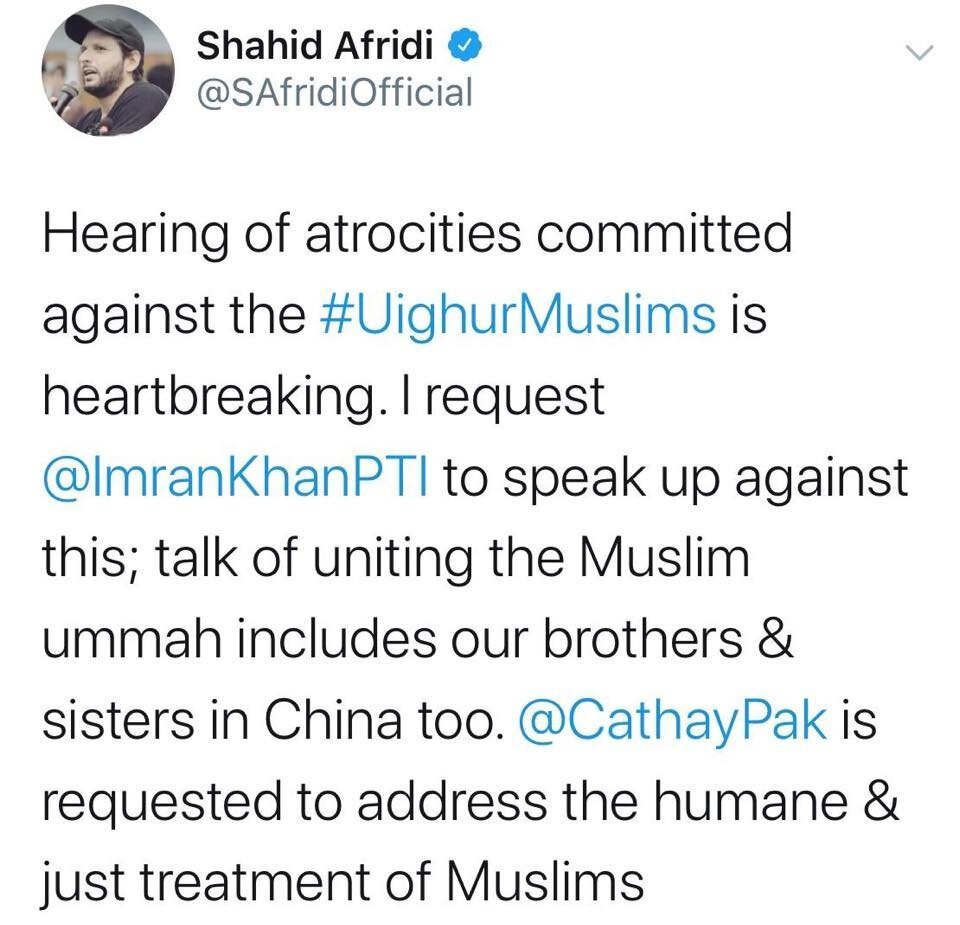 His tweet came and went as other international sports figures have begun voicing their support for the Uighur Muslims in China who are facing severe persecution in communist China where practising religion almost banned.

According to a recent report by EurAsian Times, China considers its strategies in Tibet a success and replicates the same repressive policies in Xinjiang against Uighur Muslims. According to multiple sources, China has detained over one million Uighur Muslims in what they call as re-education camps.

China’s western Xinjiang region is home to 10 million Uighurs. The Turkic Muslim group, which makes up around 45% of Xinjiang’s population, has long accused China’s authorities of cultural, religious and economic discrimination.

China Has Detained Over 3 Million Uighur Muslims; Did Pakistan Call It ‘Remarkable Achievement’?

Up to 1 million people, or about 7% of the Muslim population in Xinjiang, have been incarcerated in an expanding network of camps, according to U.S. officials and UN experts. In a report last September on Uighurs, Human Rights Watch accused the Chinese government of carrying out a “systematic campaign of human rights violations” against the minority community.
Share
Facebook
Twitter
Pinterest
WhatsApp
Email
Previous articlePakistan Takes A Jibe At Saudi, UAE For Staying Mum On Kashmir For Meagre Economic Gains
Next articleKashmir Under Army Clampdown, Net Blockade Has Become The World’s Saddest Place