Renowned film actor, producer, and director Shashi Kapoor has died (not to be confused with Indian Politician Shishi Tharoor). Kapoor was 79 years old and battling kidney disease. He died at Kokilaben Hospital, Mumbai at 5.00 pm on Monday evening.

In the seventies and eighties, Kapoor was seen as the screen icon of romance on the big screen. In the memory of Shashi Kapoor, entire Bollywood is immersed in grief.

Shashi Kapoor worked in many Hindi and English films. Although Shashi Kapoor was not active in the film industry for a long time, his films such as Jab Jab Phool Khile, Waqt, Deewar, Trishul, Hasina Man Jayage were extremely famous. 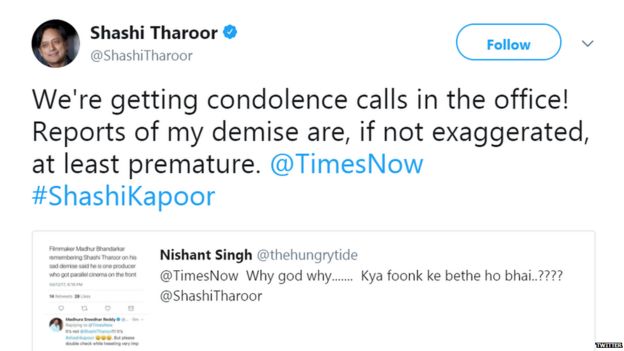 Some People got Confused between Shashi Tharoor and Shashi Kapoor

As the lead actor, Shashi Kapoor stepped on the big screen from Dharmaputra in 1961. He has worked in more than 116 films in his illustrious career. He was awarded Padma Bhushan in 2011 and Dadasaheb Phalke Award in 2015.

Other News: Separatists or Agencies: Who is Behind the Braid Chopping Incidents in Kashmir?