The United States Department of Defence’s Pentagon report titled ‘2020 China Military Power Report’ to the US Congress showed the Indian map with Pakistan-controlled Kashmir as being part of Pakistan, while Aksai Chin was shown as a separate entity.

7000-Tonne, Most Lethal Chinese Submarine Type-093A Heightens Tension As It Goes Hunting In The Sea

In its report, released in September 2020, the Pentagon report shows the map in at least 10 pages, which ignores the claim of India over Pakistan administered Kashmir, showing it to be a part of Pakistan.

However, one page later in the report, the disputed status of the Aksai Chin region which Indian claims, but is under the effective control of China, is acknowledged. India had raised strong objections when Trump Jr. on November 6 had similarly shown Kashmir as being independent of both India and Pakistan. His Twitter post had invited severe criticism from the Indian public, with the government later on, too, lodging a protest with the Trump administration. 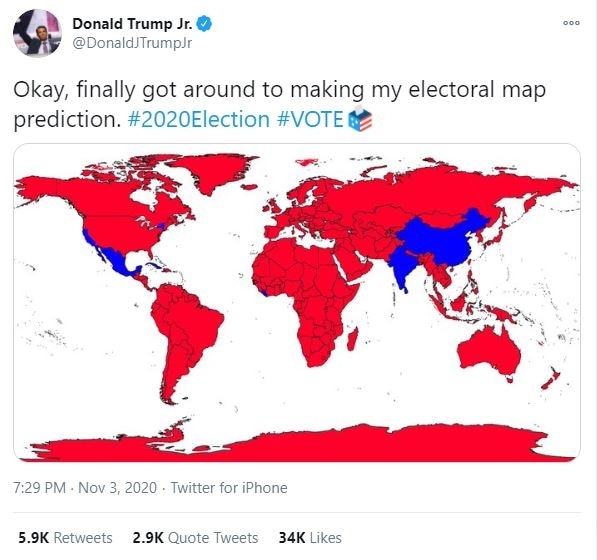 On October 24, 2020, the Kingdom of Saudi Arabia released a 20 Riyal Banknote to celebrate the country playing host to the G20 summit, which displayed a world map showing Kashmir as an independent country.

The map also showed Gilgit-Baltistan as being a separate entity from, although Pakistan did not even register a squeamish response to the move, India registered a protest saying the banknote was a distortion of the Indian map.

India did express serious concerns over the depiction of Jammu & Kashmir as a separate territory in a newly released banknote of Saudi Arabia asking Riyadh to take “corrective steps”.

India has termed it an incorrect depiction of its external territorial boundaries. Ministry of External Affairs spokesperson Anurag Srivastava said: “We have conveyed our serious concerns to Saudi Arabia both to ambassador and Riyadh, We have taken up this gross misrepresentation of India’s exterior territorial boundaries on the official and legal banknote of Saudi Arabia, we have asked Saudi Arabia to take urgent corrective steps in this regard.

If one goes by the Pentagon’s representation of the map of the Indian subcontinent, there is no dispute between India and Pakistan over that part of Kashmir which is under Pakistan’s control.

The Pentagon, which is another name for the United States Department of defense, submits such reports to the US Congress every year. Its maps have repeatedly refused to accept India’s claim over the disputed region in Kashmir, prompting protests from the Indian government.

And despite such reservations from India, Pentagon remains unfazed on its Cold War-era position, when it was an ally of Pakistan.

The US administration is still not endorsing India’s position over Kashmir, and even after forging an unprecedented strategic alliance with India post the Chinese expansionist adventures, its position remains unchanged.

There has been no Indian response to the refusal of India’s claims on the disputed Kashmir region by the Pentagon, and we will have to wait to see if the new development, like the BECA, will force any change in the US’ interpretation of the region of Jammu & Kashmir.

The incoming President Joe Biden, who has been critical of the Modi government’s action in Kashmir for the past years, according to experts, may not change that perception of the US administration has over the claims on Kashmir.

His criticism of India’s policies since the August 5 last year in Kashmir, along with the new Vice President Kamala Harris’s vehement opposition to whatever the Modi government has been doing, indicate there is going to be no softening in the country’s stance when it comes to Kashmir.