Su-35, MiG-35 fighters, and the latest Bumerang armored platform are among the 200 weapons that Russia is putting on display at Aero India 2021 being held in India’s Bengaluru from Wednesday.

F-22 Raptors: How The US Air Force Has Given A New Lease Of Life To The F-22 Raptor Fighter Fleet?

Viktor Kladov, Director for International Cooperation and Regional Policy, Rostec, told Russian news agency TASS, “Overall, we will show over 200 military exhibits. We will also demonstrate the Su-57E [fifth-generation fighter]: we have brought to India the aircraft’s model that gives an idea about this unique fighter,

Rostec is Russia’s state-owned defense and technology company. “We will also show our other bestsellers: the Su-35, the MiG-35D, the Il-76MD-90A(E) military transport plane, and the Il-78MK-90A aerial refueling tanker,” Kladov added.

India’s Ministry of External Affairs says in a note, “Russia has been a longstanding and time-tested partner for India.” The two countries have been sharing close defense ties for a long time. Brahmos missile system, SU-30 combat aircraft, and T-90 tanks are some of the key highlights of India-Russia collaborations.

Here’s a ready reckoner of some of the Russian military hardware that will be put on display at the largest aerospace show of India.

The Sukhoi Su-35 fighter, which goes by the reporting name of Flanker-E, is a single-seat, twin-engine, supermaneuverable aircraft that has been designed by the Sukhoi Design Bureau and built by the Komsomolsk-on-Amur Aircraft Plant.

Falling under the 4++ generation bracket, the Su-35 fighters have speeds of 2,800 kilometers per hour over an altitude of 11 kilometers, with a range of 4,500 kilometers.

The fighters are equipped with external fuel tanks which allow them to travel even further distances without having to refuel.

The Russian SU-35 fighters are often compared with US-made F-35 stealth fighters, considered the most advanced fighter jets in the world.

The Russian fighter has what it takes to give the F-35 fighters a run for its money, according to a US Navy Super Hornet pilot, who is a graduate of that service’s elite TOPGUN School.

“When taken as a singular platform, I like the Su-35’s chances against most of our platforms, with perhaps the exception of the F-22 and F-15C,” said the pilot.

Belonging to the top variants of the Mikoyan (MiG) aircraft family, the MiG-35D is a cutting-edge aircraft that falls under the 4++ generation bracket. The advanced fighter jets have been designed with the widespread use of 5th generation technologies.

The MiG-35D multifunctional frontline fighter has been designed in a way so that it can engage various air targets. 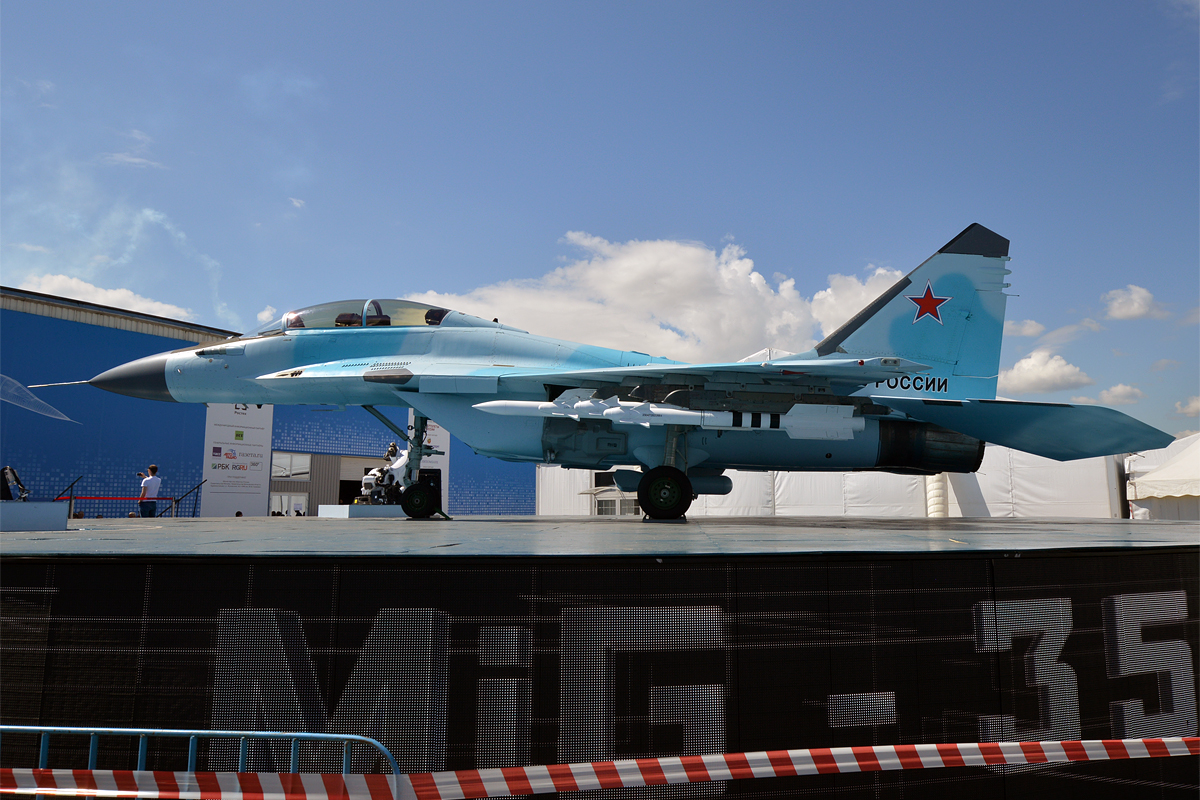 The fighters can take on both moving and fixed ground (surface) targets with the help of guided and unguided armament complex in favorable and adverse weather conditions, day and night.

The MiG-35D, which is a two-seat configuration, can be operated both in combat and training modes, is a further development of the MiG-29M/M2 fighter.

Some of the features of the fighter jets include their versatility, wide range of weaponry, the capability of conducting close air combat in a heavy countermeasures environment, and its operation in multiple climatic conditions.

As announced by Rostec on Monday, the export versions of combat vehicles based on the latest Bumerang armored platform will also be demonstrated at the Indian aerospace show.

Developed by the Military Industrial Company, the Bumerang is the latest standardized wheeled platform for multiservice forces. 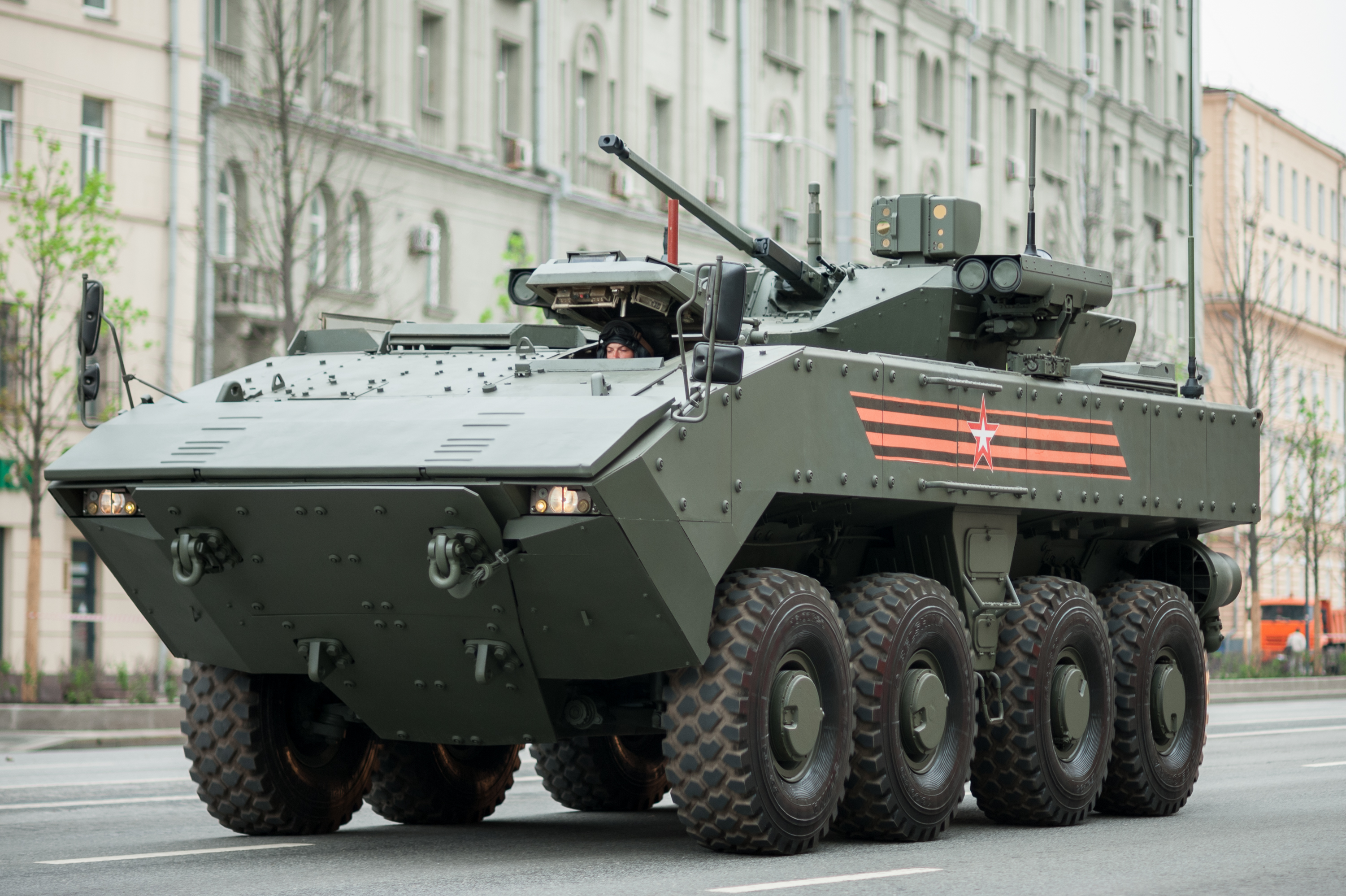 The platform has been used as the basis for developing the K-16 armored personnel carrier and the K-17 infantry fighting vehicle. The K-17 made its first public appearance at the Victory Day Parade on Moscow’s Red Square in 2015.

“For the first time abroad, we will demonstrate the K-16 armored personnel carrier and the K-17 infantry fighting vehicle based on the advanced Bumerang wheeled platform. The platform has been developed on order form the Defense Ministry of Russia and features the highest combat and operational characteristics,” said Kladov.

The baseline version of the combat vehicle is outfitted with the Epokha combat module with a 30mm automatic gun and a coaxial 7.62mm machine-gun and the Kornet anti-tank missile system.

The Kamov Ka-226T light multi-purpose helicopter (NATO reporting name of ‘Hoodlum’) is a small, twin-engine Russian utility helicopter that features an interchangeable mission pod, rather than a conventional cabin.

This allows the helicopter to accommodate various equipment, as the situation demands. It entered service in 2002.

“This is an ideal vehicle for local climatic and physical geographic conditions. I am confident that our other helicopters, such as the Mi-28NE, the Mi-171Sh, and the Mi-17V-5, the Ka-52 reconnaissance and attack gunship, and the Ka-31 radar surveillance helicopter will also capture attention,” Kladov said.

“This year we will feature in Bengaluru a lot of Russia’s latest systems: aircraft, air defense complexes, the armor, and munitions. Also, we are planning to present our promising civil programs in the sphere of electronics, engine-and aircraft-making,” he added.

Previous article
F-22 Raptors: How The US Air Force Has Given A New Lease Of Life To The F-22 Raptor Fighter Fleet
Next article
India’s Stealth Drones Likely To Steal The Show At Aero India 2021; ‘Ghatak’, ‘Warrior’ Key Attraction