Su-75 Checkmate Vs Su-57 Felon – How Does Russia’s New, Single-Engine Stealth Aircraft Differ From Its Predecessor?

The Russian Su-75 ‘Checkmate’ which made its international debut at the ongoing Dubai Air Show, has been in the limelight ever since its unveiling in July this year.

30 More Rafale Fighter Jets For Egypt As Dassault Sets The Ball Rolling On $4.5B Procurement Contract

Recently, a promotional video was released by the Russian authorities, that offered a closer look at the new stealth aircraft, Checkmate, which will be Russia’s second stealth fighter jet after the twin-engine Su-57 Felon.

Photos of the two fighters were also released on the internet by Rostec, after the Checkmate video surfaced. Many analysts concluded that the Checkmate is substantially bigger in size as opposed to what was imaged earlier, however not bigger than the Su-57.

The Su-75 Checkmate, also known as the Light Tactical Aircraft (LTC), is now being referred to as the Russian medium fighter instead of a light combat jet owing to its size and a closer look at the design.

The Su-57 is 66-ft long with a wingspan of 46 feet. In contrast, the Checkmate is 57 feet long with a 39 feet wingspan. However, a major difference between the two jets is that the Su-57 is a twin-engine fighter jet whereas the Su-75 is a single-engine aircraft.

The latter was showcased for the first time at the MAKS Russia Air show followed by a media blitzkrieg, as previously reported by the EurAsian Times.

The much-talked-about aircraft has been developed by the United Aircraft Corporation, which is a part of state defense and technology conglomerate, Rostec.

The Checkmate is a fifth-generation light fighter jet, which will take its maiden flight in 2023 and serial production will begin in 2026 after all clearances are obtained and an official go-ahead is given.

This modern aircraft, the second fifth-generation jet after the Su-57, is being seen as a game-changer by many. The single-engine aircraft is lighter and cheaper as compared to other modern combat aircraft such as the American F-35 Lightning II. 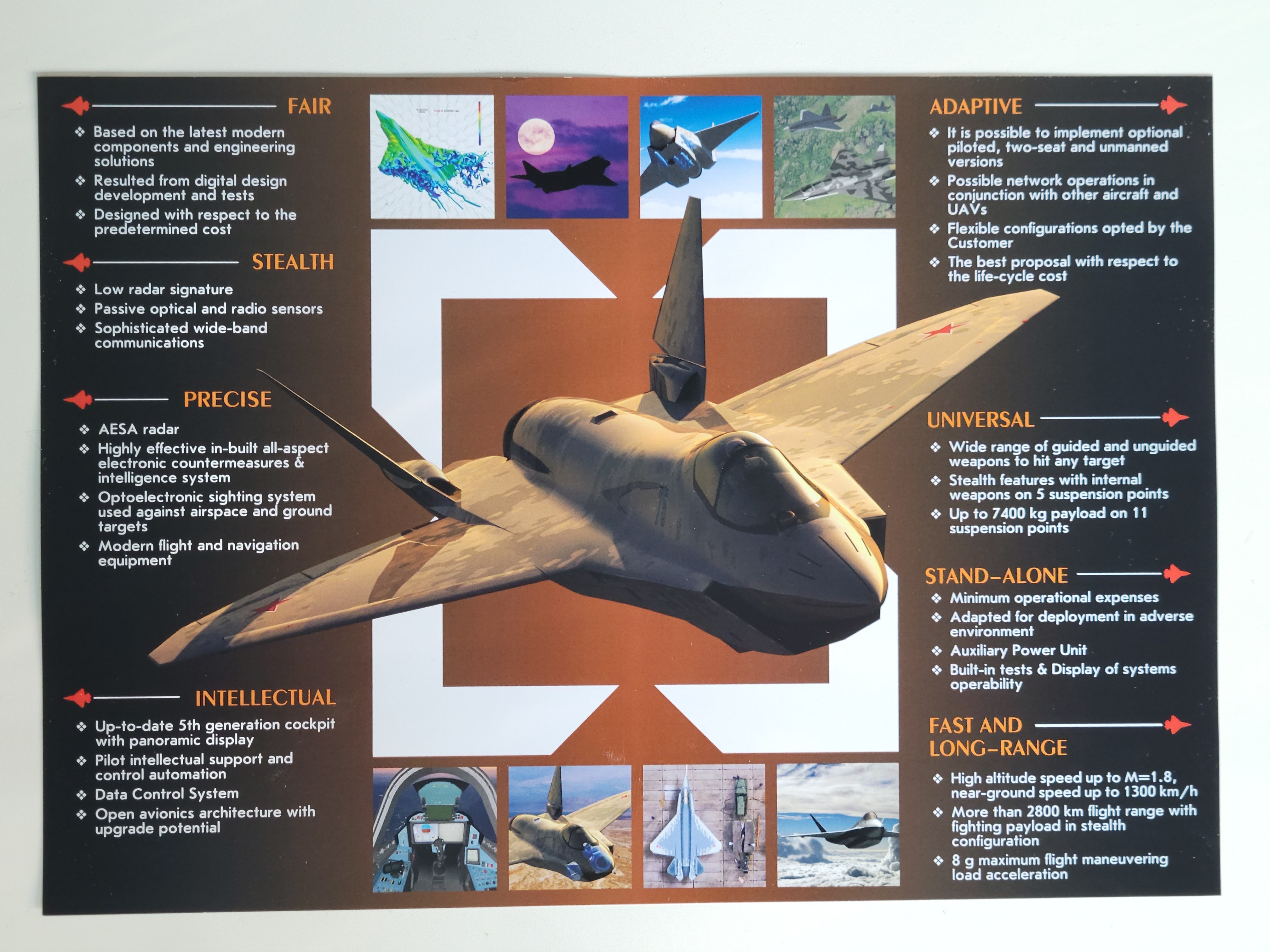 The manufacturer of Su-75 told TASS that the new light combat aircraft would be capable of striking any target on a future battlefield and would be capable of accomplishing mission tasks without entering into an area controlled by an adversary’s air defenses.

“The Checkmate fighter is outfitted with versatile armaments capable of fighting any threat: from unsheltered command posts to especially sensitive targets for a potential enemy,” the Rostec spokesperson said, according to TASS.

The aircraft is likely to be powered by a derivative of the NPO Saturn AL-41 engine, which is also installed on Su-57. It will have a maximum speed of Mach 1.8 and supercruise performance – the ability to sustain supersonic flight without the use of an afterburner.

These details were spelled out on the first day of the Dubai Air Show by the UAC director-general Yuri Slyusar, as reported by Flight Global.

It is eventually set to replace the MiG-29 and Su-27 fourth-generation aircraft in the Russian Air force. The Felon, as it is called by NATO, has a supersonic range of more than 1500 km, which is more than twice that of the Su-27 fighter aircraft.

It has a fuselage with a blended wing body that combines the functions of a fighter jet and a strike aircraft. While Russia has pitched this as a rival of the American F-22 Raptor, many Western analysts are of the view that Su-57 is not a stealth aircraft in the true sense of the term.

They also cast doubts about its fifth-generation quality as the aircraft uses an older engine.

Following a crash in 2019, the credibility of the Su-57 came under a cloud and many prospective buyers of the fighter aircraft, including India, turned down Russia’s offers. A new development process is currently underway and the Russian Air Force is set to get 76 of these aircraft over a few years.

The images of both Sukhoi-manufactured fighter aircraft — Su-75 and Su-57 — were released by Rostec. Military experts and aviation buffs took to Twitter highlighting their distinct features.

One common feature noticed is that both Sukhoi designs are optimized for a ‘balanced’ degree of low visibility giving the aircraft a certain degree of stealth advantage.

Both planes have a blended-body design with a lift-generating fuselage and wing leading-edge root extensions (LERXes). The only difference is that Su-57s are relatively quite large as compared to the Su-75 and have massive movable flaps, explained The Drive.

The Checkmate shares some features with the Su-57 jet. In particular, the two airframes have very similar wing sizes and forward fuselage sections, however, the two aircraft’s tail sections vary significantly.

While the Su-57 opts for a more traditional canted tail and horizontal stabilizers, the Checkmate instead features a ruddervator that, with fewer surfaces, would presumably be stealthier than a conventional tail assembly, explains National Interest. 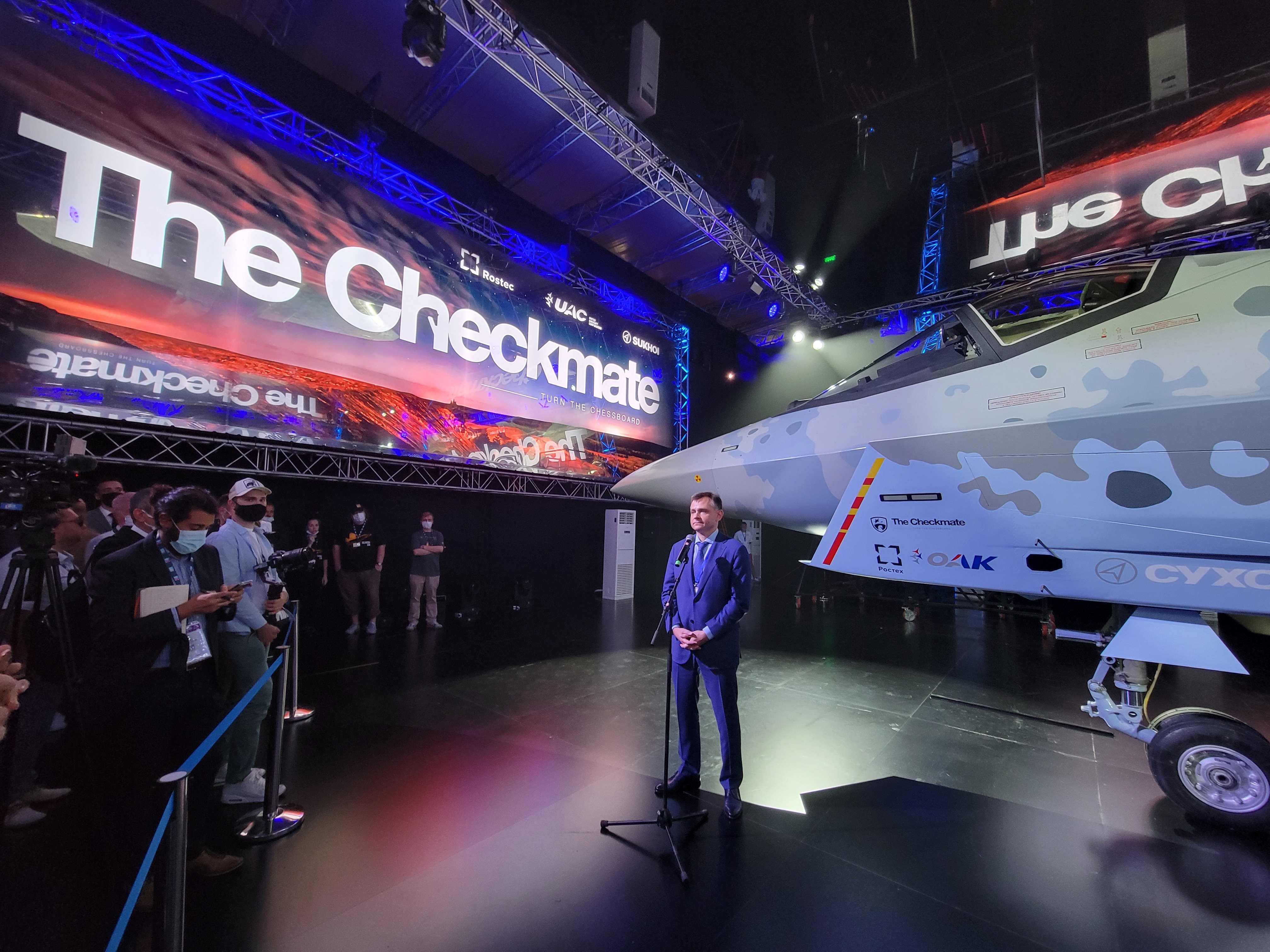 The comparison between the two combat aircraft reveals various similarities with respect to the design of the wings and the use of the Izdeliye 30 engine (AL-41F1S) used in the Su-57. Rostec, the manufacturer of Checkmate, however, claims that the new fighter aircraft has benefited from several other systems of the Su-57.

“Checkmate was developed with the help of scientific and technical bases obtained during the creation of the export version of the Su-57E aircraft. In particular, the aircraft inherited the cabin, onboard systems and a few other elements. This makes it possible to reduce the cost of the aircraft and simplify its maintenance,” stated the company. 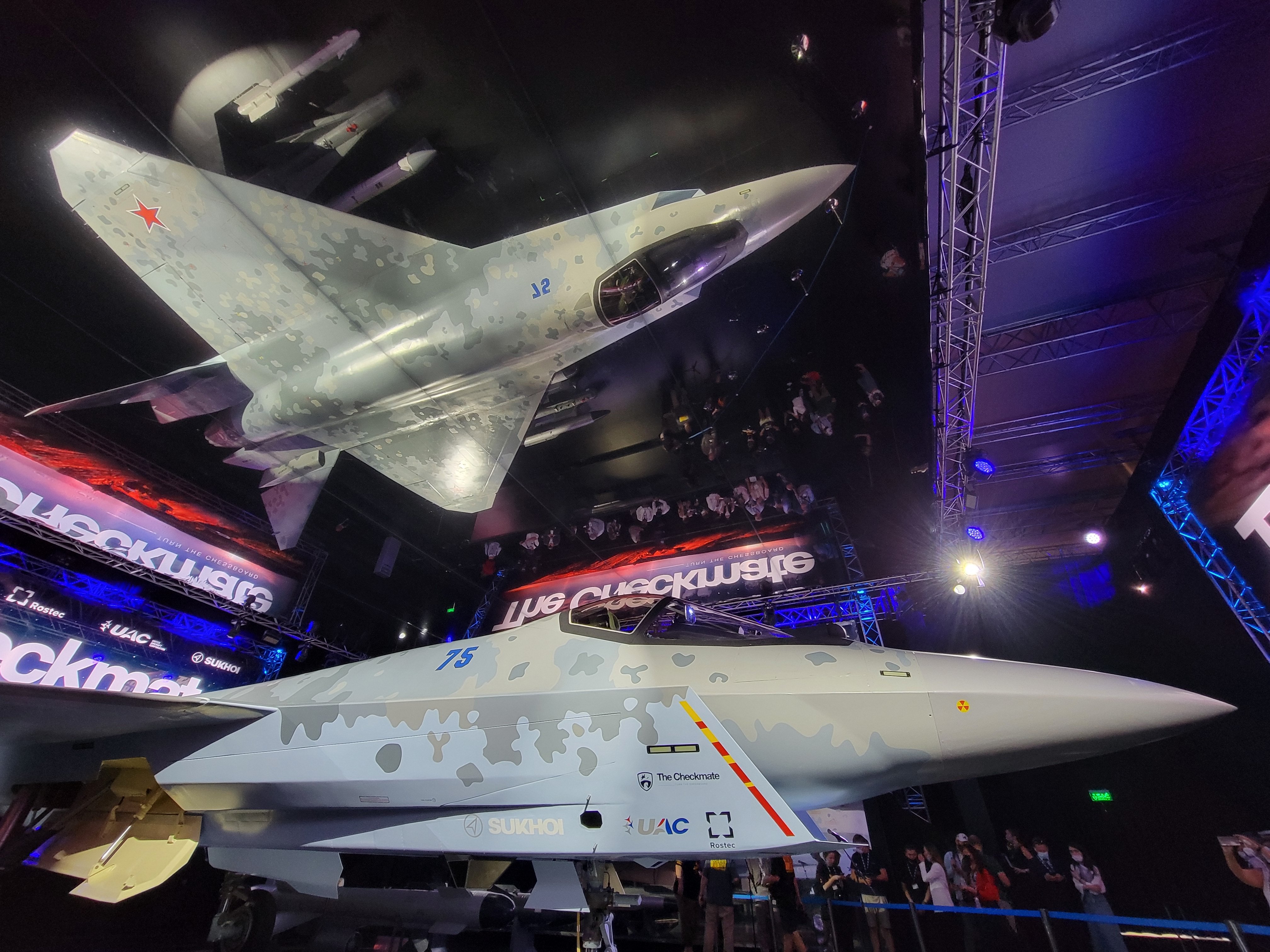 This is an expected difference between the two as the former is a single-engine ‘light’ combat aircraft.

The Su-75 boasts a modern glass cockpit with a similar layout to that of Russia’s Su-57. In addition to catering to the needs of its own Air Force, the Checkmate is being developed for export purposes while keeping in mind countries like India, Vietnam, and several African nations.

It is pertinent to note that Russia is desperately looking for an export-worthy fifth-generation stealth jet following the Su-57 debacle. And Moscow believes Checkmate would help establish Russia as a major player in the affordable stealth jet market.