In a row of events at the South China Sea, Beijing, continuing its intensified harassment of Taipei, again violated Taiwanese airspace and intruded into its “Air-Defense Identification Zone” (ADIZ) on Sunday.

The intrusion was reportedly done by PLA’s Y-8 anti-submarine warfare aircraft, which has been used extensively by the Chinese to make incursions into the Taiwanese airspace. The news was first reported by the Liberty Times, citing local defence enthusiasts who recorded open broadcasts by the Island’s armed forces to the PLA aircraft.

According to the Global Times, the sortie marked the fourth consecutive day the PLA has sent warplanes near the Taiwan island since the start of October, and the eight-day ‘National Day’ and Mid-Autumn holiday period on the Chinese mainland.

One PLA Y-8 ASW aircraft entered #Taiwan’s southwest ADIZ on Oct. 4, the flight path as illustrated. #ROCAF fighters scrambled and deployed air defense missile system to monitor the activity. We maintain close surveillance over the region and actively react to all situations. pic.twitter.com/pDtfiBCNrr

The Island’s defence ministry, in a tweet, revealed the flight path of the Y-8 and scrambled its defence fighters to intercept and, in the worst-case scenario, shoot down the aircraft.

“One PLA Y-8 ASW aircraft entered #Taiwan’s southwest ADIZ on Oct. 4, the flight path as illustrated. #ROCAF fighters scrambled and deployed air defence missile system to monitor the activity. We maintain close surveillance over the region and actively react to all situations,” it said. 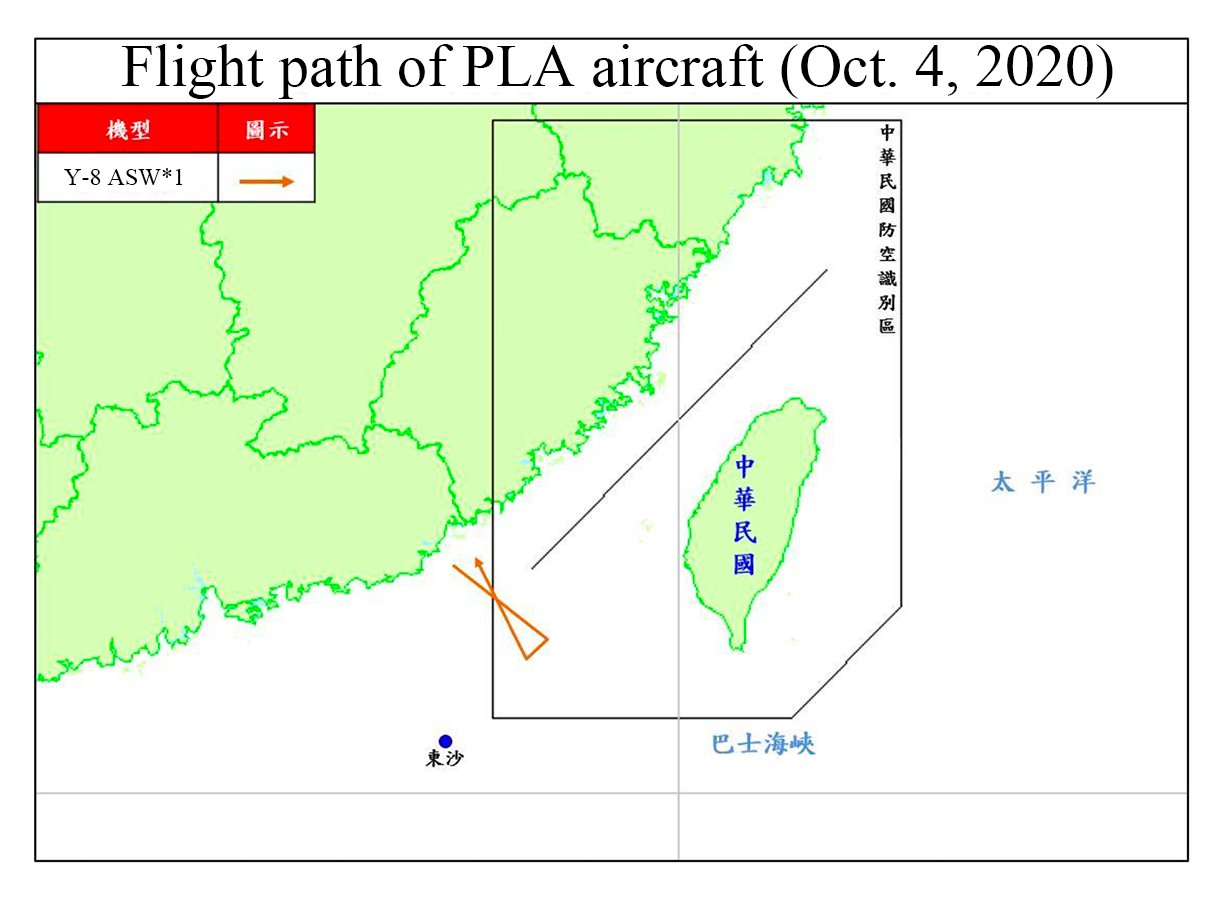 While the experts in Beijing told the Global Times that the concentrating PLA drills are depleting the island nation’s will to fight. However, most experts living outside China believe that such Chinese actions actually bolster the Island Nation’s determination to resist the PLA and increase military spending.

Taiwan has become an important “card” in deterring Beijing’s aggressive policies in the region, and in this year it has been the flashpoint of the world’s attention towards the dispute. Taipei has gained popularity and sympathy from the world and has deepened its military ties with the United States by securing a deal to purchase 66 advanced F-16 “Viper” jets.

According to Asia Times, the aggressive manoeuvres strengthen the US resolve to “punish” China economically and militarily, in a dangerous game of chess between the two superpowers.

The Chinese forays are likely a reflection of Xi Jinping’s aggressive “Wolf Warrior” stance, which has seen China’s goodwill squandered around the world. It also mentioned that Taiwan’s F-16s could easily track and shoot down the Y-8 anti-submarine aircraft, but merely intercept the aircraft, as a show of force and determination.